I recently received an email from Conrad Grebel College at the University of Waterloo inviting me to attend an exhibit and concert commemorating the life and work of Bertha Von Suttner, the first woman to win a Nobel Peace Prize. I have to admit that I’d never heard of her before, and after doing a little research I learned that fourteen other women have received the prize since its inception but other than Mother Teresa, I didn’t recognize any of their names either. I know I should be more knowledgeable about international affairs but I’m guessing I’m not alone in not having a clue about who some of these amazing women are, or the remarkable things they’ve accomplished. In an effort to make amends for my ignorance I’ve compiled a list of the fifteen female peace prize winners, along with some of the history of the prizes themselves.

Nobel prizes have been awarded since 1901 to acknowledge great achievements in the fields of physics, chemistry, medicine, literature and peace. Six years earlier the foundation had been laid for the awards program in the last will and testament of Alfred Nobel, a Swedish chemist, engineer, entrepreneur, author, pacifist and inventor who somewhat ironically invented dynamite. A total of 126 peace prizes have been awarded so far, and decisions about who qualifies for a prize are now made by the five member Nobel Committee which is appointed by the Norwegian Parliament.

The women awarded peace prizes were from many different countries and had different approaches to working for peace, but what they had in common was a deep desire to make the world a better place and a willingness to sacrifice their personal safety and comfort to achieve their goals. Unfortunately, what they also had in common was being derided and marginalized by people in positions of power – sometimes facing imprisonment and often labeled as unpatriotic radicals.

Related: 5 Women of the Early Church You Should Know

Here’s the list of the fifteen female recipients of the Nobel Peace Prize along with a brief description of why they received the award.

These women are heroes and incredible role models in a male dominated world where peace is all too often treated like an inconvenience that gets in the way of political and economic ambitions. Hopefully getting to  know something about them will provide a catalyst for changing the way we think about women and peace. 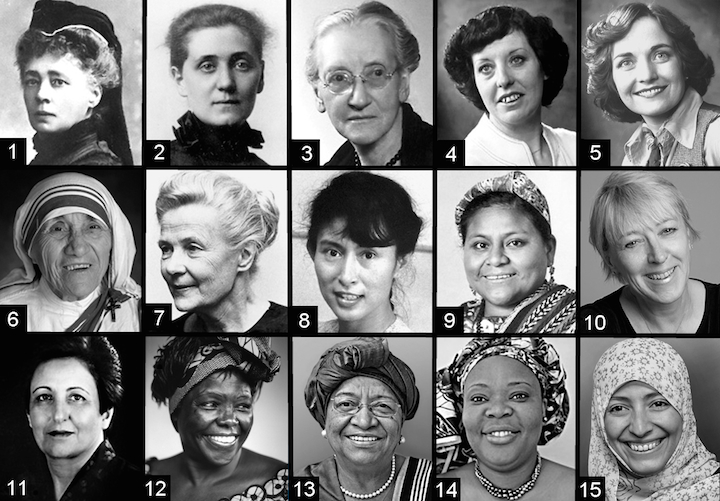