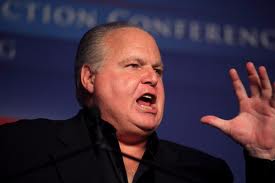 I teach English, writing and public speaking at the college level.

There are three key principles of communication; to inform, to persuade and to entertain. Effective and memorable communicators will incorporate at least one, but preferably all three, of these.

Rush Limbaugh, much to my amazement, accomplishes what I had always considered impossible; he does none of these.

When he is cornered, as he often is, for his outright distortions and grossly inappropriate statements, his default defense is that he is “an entertainer” and should not be compelled to stick to actual facts in his programs.

It’s a fascinating defense, but at the very least, I would expect him to be at minimum, actually “entertaining”.

Rush Limbaugh must be an acquired taste. I do not find his particular brand of blatantly rude and pompous, good-old-boy race-baiting and sexism amusing or edifying in any way.

He is “entertaining” in the sense that an intimidating bully might be found entertaining – as long as we, or those we value, are not among his targets.

Rush did not become a media bully overnight. It took years, decades perhaps, to perfect his particular style of attacking and haranguing victims who can’t find back.

One can easily imagine Rush on the typical schoolyard picking on much smaller kids.

I have always marveled that Rush Limbaugh’s program is a staple of Armed Forces Radio. His bloated, self-righteous cynicism is a far cry from the upbeat, invigorating radio programming made famous in the film “Good-morning, Viet-Nam”.

When I picture our troops putting their lives at risk in the name of our national interests – especially in a desolate area, under constant threat, I would want them to hear voices of hope and encouragement – voices that would remind them what they are fighting – and killing – for.

Love him or hate him, it is painfully obvious that Rush Limbaugh demonstrates every classic attribute of an abuser; here are just a few:

Just recently, a group of female military veterans have appealed to Armed Forces Radio to drop Rush Limbaugh’s program. They know all too well the hazards of a hostile environment – and the inherent vulnerability of women in a predominantly masculine military culture. Rush Limbaugh’s tax-payer supported sexism only poisons their environment and endangers them even more – from their colleagues in uniform.

This is one tangible way we could all “support our troops” – give them good news from home.

Rush’s advocates say he has the right of “Free speech” – yes, of course he does, but the Constitutional right refers to the citizen’s right to confront  evil or corruption in government – not personal attacks.

Surely the right of free speech should inspire us to speak truth that heals instead of snide personal comments. Are we so far adrift that toxic insults are considered “entertainment”?