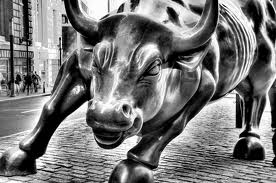 There was an occasion in the 60s where a bunch of hippies surrounded the Pentagon and tried to exorcise the demons.  It didn’t work.  Despite their valiant effort, not much happened that day.

Nevertheless, I am one of those Christians who believes in angels and demons.  But I think the traditional Christian understanding of these things needs a major makeover.  Seems to me the Tempter comes in many forms, and is just as likely to dote a three-piece-suit and wingtips as he is to have horns and a pitchfork.  And perhaps the angels look more like the bums in the alley than the feathered white babies on Hallmark cards.

One of my favorite demon stories from the Bible is about a guy named “Legion”.  As the story goes, Jesus is walking through an area near the sea of Galilee and meets a dude who is in chains, violently possessed by demons.  When asked his name the fellow says, “My name is Legion, for we are many”.  Jesus drives the demons from the man into a bunch of nearby pigs that charge into the water and die.  And the man is free.

But here’s why I like the story.  As with most good stories, there’s a whole lot more going on than meets the eye.  For starters, the word “Legion” was a familiar word, used for a division of Roman soldiers (much like a platoon), and there would have been many legions in the area.  The Decapolis where Jesus meets the guy was a group of ten cities (hence the name) under Roman occupation, and a hub of the Roman military.  The man in the story is said to be “occupied” by a demon, a word loaded with meaning both then and now, especially among people whose land was under foreign occupation. The demon occupation was leading the man to hurt himself, bound up in chains, living in the cemetery among the dead.  Death was in the air, in a land infected with violence and militarism. Nearby is a band of pigs, a quintessential “unholy” animal for first century Mediterraneans, and the demons ask to be sent among the pigs.

So Jesus grants the request and casts them into the pigs, which immediately “charge” into the sea and drown.  No one could have missed the subversive symbolism of the pigs “charging” into the sea, as they remembered their own liberation story which climaxes with Pharaoh’s legion of troops “charged” into the sea where they drowned, hundreds of years earlier.

It is also noteworthy that the word “cast out” used in the exorcism is the same phrase used when Jesus drives the money-changers from the temple because they had turned it into a market.  No wonder the story ends with folks telling Jesus to leave their town.

Jesus was walking down Wall Street in the Empire State.  He met a man occupied by evil spirits that had caused the man to gorge himself on food and cover himself in gold chains.  He lived in the shopping malls and banks.  When Jesus asked the man his name, the man replied, “NASDAQ”.  Meanwhile, about a mile away a train loaded with cows was passing by, on the way to the market.  Jesus cast the demons out of the man and into the bulls, which charged down Wall Street and into the Hudson River where they drowned.  The man was set free.   The crowd told Jesus to get out of town.

Here’s what I love about the story.  The man gets set free.   Sure the pigs drown and the owner was undoubtedly ticked, but the oppressed man is delivered from the self-destructive patterns of his occupation.  He is free.

This story can still be true today.  We’re all recovering from our own demons… whether we are occupied by violence or the market, or racism or hatred.  We can all be set free.

And the good news is no one is beyond redemption – not even the 1%, the CEOs, the bankers, the terrorists.  The revolution is big enough to set both the occupied and the occupiers free.

Perhaps what we need today is not an occupation of Wall Street… but an exorcism.  And after Wall Street gets cleansed, maybe we’ll move on to the Pentagon and give that another shot.