How many prophets will it take to repent of the United States’ original sin?

For white Christians in the U.S. to acknowledge and turn away from our complicity in racism, how many prophets do we need? Lenny Duncan’s answer in Dear Church: A Love Letter from a Black Preacher to the Whitest Denomination in the U.S. is “all of us.” Jemar Tisby’s is “the collective witness of 400 years of American history,” meticulously documented in The Color of Compromise: The Truth About the American Church’s Complicity in Racism.

I believe them both.

Amidst the ongoing racist comments and actions of the current president, the temptation grows to define racism as only overtly discriminatory or hateful acts based on race. Indeed, that virulent racism is deadly, like when a white supremacist murdered nine Black church members at Mother Emanuel AME Church in Charleston, NC. (Duncan’s book has a chapter referring to this hateful act, titled “Dylann Roof and I Are Lutheran.”) Yet what white Christians and white churches must come to grips with are not the blatant acts, but the insidious forms of racism that are embedded in both our history and how we do church today.

Duncan and Tisby both prove, from their own perspectives, that personal relationships with a “Black friend” are not enough to stop or to divert systemic racism and our complicity in it. 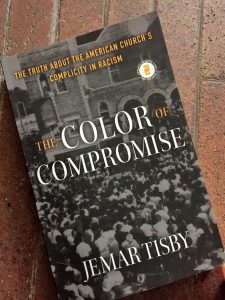 With degrees and expertise in history and theology, Jemar Tisby puts his finger on potential turning point after point in American history when churches could have stood up for the Gospel of Jesus Christ — that people of every race are siblings of Christ, beloved children of God, inherently worthy of the dignity of those made in the image of God. Yet time and time again, churches instead collaborated with the slave trade and its legacy, stayed silent on lynching, then battered their theology into a shape that sealed a lid on top of their racism.

New denominations were formed to protect slaveholders in their ranks. Tisby’s focus is on evangelical churches, which exploded with political power in the form of the Christian Right, a movement galvanized by the defense of segregated “Christian academies” during the 1960s. Yet the chapter on “Remembering the Complicity in the North” jolts readers with the reality that it is not just The South or evangelicals who perpetuate systemic racism in their churches or culture at large. The rise of Fundamentalism was laced with a racialized understanding of theology which “dissuaded other Christians from certain forms of political involvement and encouraged them instead to focus on personal holiness and evangelism” (Tisby, p. 116) and has certainly seeped out into our society as a whole.

Racism absolutely adapts, and one of the best ways it has adapted is through coded language and policies that cannot be traced back to race without a little work, baptized as they are in “American” values of individualism and private consumerism. Interpreting a verbatim quote of Lee Atwater in a 1983 interview, Tisby says:

Atwater articulated what has become known as ‘color-blind conservatism.’ By excising explicitly racial terms like ‘black,’ ‘white,’ or ‘n*****’ from their language, practitioners can claim they ‘don’t see color.’ As a result, people can hold positions on social and political issues that disproportionately and adversely harm racial and ethnic minorities, but they can still proclaim their own racial ignorance. As Atwater articulated, it is clear that the switch from racial language to supposedly color-blind discourse was once a conscious and deliberate choice. Today, it has become second nature – and the unconscious practice of many American Christians. (p. 153)

Church, if we do not know our history, it is even more difficult to repent in the present. We got here gradually, one compromise at a time, over centuries of convincing ourselves that the economics of slavery and racism are somehow separate from our faith. The Color of Compromise concludes with a remarkable chapter of actionable items (some of which are repeated in Dear Church), but I wouldn’t skip to the end. We ought to feel the weight of all those eschewed opportunities to stop this sin, and the risk to our future if American churches and Christians do not outright oppose racism in the present. 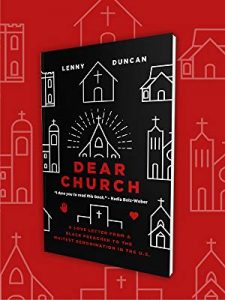 Lenny Duncan takes a completely different approach in his book Dear Church: A Love Letter from a Black Preacher to the Whitest Denomination in the U.S., to get us to recognize our complicity with racism. From the “big picture” view of Tisby’s work, Dear Church zooms in, until it seems like the author is sitting in our own nearly empty, echoing sanctuary. As the subtitle suggests, this book is aimed at Duncan’s specific denomination and mine, the Evangelical Lutheran Church in America, but believe me, there are many, many things in here for every kind of Christian.

Duncan gives specific examples of how churches reinforce racism, sometimes subtly or unconsciously, often coded as something else: that “traditional” picture of white Jesus hanging in the nursery; the persistent “light and darkness” themes of church seasons; the punitive assimilation of leaders, who can only get a job when they act white enough to be acceptable. It is really our lack of action, our silent complicity with racism, that keeps such churches so white. Yet, everything Duncan writes clearly comes from a place of love. His personal stories throughout, about how he was accepted and welcomed just as he was by congregations within this whitest denomination, testify to potential for faithful change and its fruits.

Not so tied to the chronology of historical events, Dear Church can veer off to explore the boundaries of white supremacy, exposing the ties between racism and capitalism, toxic masculinity, and nationalism. Basically, everything is an opportunity to talk about and repent of our complicity with racism. And bringing it out into the open air is the only action that is likely to heal that festering wound, but it is going to hurt first. Lenny Duncan also gives advice – deeply faithful, hard-earned advice aware of the consequences.

Dear Church, truth that is not grounded in love is just brutality. You are that love, and you can convey that truth. Be the line in the sand; say that you will no longer allow a false gospel narrative – based on fear and a lack of understanding of the deep wells of mercy and grace that God offers – to be sold as ‘church.’ Assert that this is the generation when it stops, and you are the people who will turn the tide. We will never see this change if we aren’t committed to seeing this through (Duncan, p. 133).

White American Christians, these prophetic voices are calling for our repentance and re-directed commitment to God’s anti-racism work in our time. The historical account bathed in theological understanding AND the personalized memoir and pastoral guidance are epistles to the Church of our day to convince us of the forces of white supremacy ripping apart our witness.

Whoever writes about this next, I want the Holy Spirit to put me on their mailing list. Pentecostals, maybe? We may be different across denominations in many ways, but we are woefully similar in perpetuating a culture of white supremacy. It is past time to listen to the prophets and repent!