A stone’s throw from Starbucks – Joe, homeless and a dead ringer for blues singer Robert Johnson, tells Wheaton College freshman Wendy Gullivan that He is God and has a message for the Evangelicals…a message He wants her to deliver.

He’s depressed, he tells her, to the point of shutting down earthly operations – all thanks to the Evangelicals, especially the American ones.

Thinking the man crazy, Wendy walks away and drifts back to life as usual. But in the months that follow, Wendy can’t get her brief encounter with Joe out of her mind. When her black-and-white, well-apportioned faith begins disintegrating, God decides to pay Wendy another visit . . . but this time it will change everything in the most unexpected way.

This is the story within Brian McLaren’s latest e-book, The Word of the Lord To Evangelicals. The reader finds themselves dropped periodically into moments within Wendy’s life. Moments that define who she is and what she stands for. If you listen closely, or in this case read, you will undoubtedly find your story within some aspect of Wendy’s!

Brian McLaren graciously agreed yet again to respond to some of my questions surrounding the book:

BM: Certainly not the way it’s commonly being done these days! But as I’ve explained in my previous books (especially Naked Spirituality), the word “religion” derives from the root word ligament, which means connection. So both politics and religion are interested in the ways we human beings forge connections–social ligaments–that bind us to one another, to the past, to unborn generations, and even to the land and the environment. I think Jesus’ core teaching about the kingdom or reign or commonwealth of God is about exactly this kind of reconnection.

RLC: What does the word “political” mean to you?

BM:The word derives from polis, which means city. Politics has to do with how we organize our overlapping, interrelated, and interconnected lives when we live in close proximity to one another. 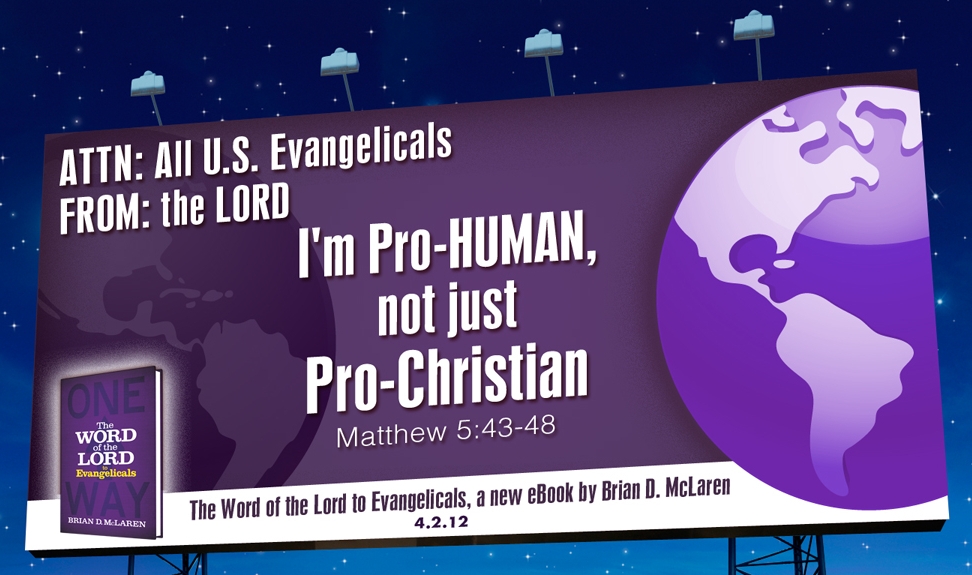 RLC: This book is written with verbiage ideal for folks who are well versed in the lingo and culture of evangelicalism as if you are writing as an evangelical to an evangelical. Why did you choose this approach?

BM: Of course, I’m from an Evangelical background, so this is my native tongue. But as time goes on, I wonder sometimes if I’m losing my fluency … I spend more and more of my time around non-Evangelicals, and like jargon in other fields, if you aren’t careful to keep up, you can lose your old accent and pick up new ones.

It’s kind of strange, but then again kind of to be expected, that there is such a specialized jargon in every religious group. Anthropologists tell us that group affiliation – which includes everything from tribal paint to linguistic markers like saying “halleLUjah!” with just the right accent – is on some primal evolutionary level about who we can trust. We’re looking for members of our tribe so we can feel safe with them. Of course, this can get out of hand when we put everyone in one of two categories – safe or dangerous, us or them. So I guess I’m trying to both acknowledge those categories … and also rattle them a bit.

BM: In writing these – which are completely and totally fictional, I’ve been thinking about how it must have been for the original receivers of divine revelation. Maybe when they say, “The Word of the Lord came to Hosea” or to Jonah or whatever, maybe that didn’t happen in a moment at all, but rather was the culmination of months or years of preparation. Relatively few things in my life have come as a bolt from the blue … most of them have been planted like a seed, and then for a while nothing seemed to happen. Then, maybe there was germination, then growth, and sometimes even fruitfulness. So I wouldn’t look at these books for information on whether or not God is about moments … but maybe a little seed could get planted even through a book like this, and maybe God might water it and surprises could follow.

RLC: What are you hoping Evangelicals, as they are defined by the context of the book, take away from reading this book?

BM: Well, in one way a fiction author would never want to just come out and say it, you know? It’s a lot easier with a serious nonfiction book where you have a main point that you can convey in one sentence. But the story unfolds in the context of a young Evangelical woman coming to terms with her Christian identity, and I hope that all readers would take away something from being with her in that space … so they can think about their own identity, whatever it is.

I remember years ago reading My Name is Asher Lev by Chaim Potok. I’m not an orthodox Jew of Asher’s heritage, nor am I a painter … but I gained so much from being in the fictional space Potok created, because as unlike Asher as I am, I am also like him, grappling with my own identity in relation to my own communities and my own unfolding story. Now I should quickly say, these little ebooks are in no way comparable to a great work of literature like Asher Lev … obviously! But readers have been telling me that along with a lot of laughs, they are having some aha’s and wow’s and even amen’s while reading, and that means a lot to me as a writer.