Today Tony Campolo turns 79. Undoubtedly many people will send Tony their birthday wishes. He’s been an inspiration, challenger, and full-time evangelist for nearly five decades and there’s truly no way to quantify the number of people he’s spoken to, or the number he’s inspired to commit their lives to Jesus, or the number he’s spit on (if you’ve ever sat in the first 8 rows of one of his talks then you know what I’m talking about).

I’m one of those people who desire to wish Tony a happy birthday. So, before I get any further: Happy Birthday Tony! You truly are an unbelievable individual. But, as someone who has a unique perspective on Tony and his life I thought I’d offer some additional thoughts to commemorate his special day. 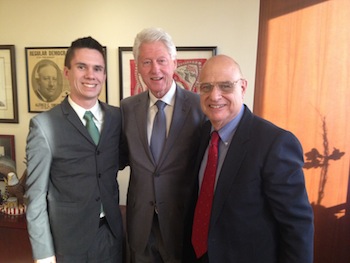 You see, I’ve worked full-time for Tony for a little over three years now. We’ve sat on planes together (sometimes he gets upgraded and I’m stuck in the back but that’s ok: Jesus had something to say about the first being the last, right?), shared more meals than I can remember, and journeyed to some fascinating places. He’s introduced me to family friends and famous celebrities, from his high school best friend who he once got pulled over with for driving backwards down a major highway to former Presidents of the United States, Tony has opened his life to me in deeply generous ways.

To me that’s what makes Tony so unique. He’s deeply generous and he’s not out for credit. He does more than he has to, and many things that no one would blame him for not doing if he chose not to. In fact, just this past weekend Tony and his wife, Peggy, chose to spend their Saturday lunch time with me, my fiancé, and her family. He won’t tell a story about it or get a lot of recognition but to those with us at lunch, the two hours of conversation will be talked about for years to come.

For those who know Tony, none of this comes as a surprise. If anything, it’s expected. But, unlike many others, I only recently met Tony. Altogether I’ve known the name “Tony Campolo” for about five years. He was a speaker at a conference a friend took me to while I was at Community College. Tony spoke with Shane Claiborne and, long story short, they inspired me to apply to Eastern University. It was at Eastern that I first met Tony. I was a student worker in his speaking office where I spent two years booking air plane tickets and organizing his speaking schedule. Following graduation I was invited to come back and work with Tony full-time, but this time 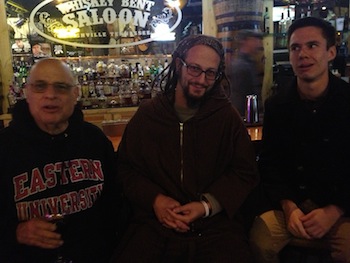 I’d be working on the new Red Letter Christians initiative. In essence, Tony was about to give me access to all his contacts, all his connections, all his ideas about the future of this new idea that’d been brewing in him for a life-time. He trusted me from the first day we worked together and he’s leant me every connection he has to help make Red Letter Christians a success.

When I look back over the past three years there are a few particular moments with Tony that stand out. There was the one time he spilled an entire bottle of wine over me while we listened to a few violinists in downtown London, the night where we sang hymns with street musicians in Nashville, and the many car rides that have consisted of Tony attempting to teach me old union songs. And now that I write it out it’s fairly clear that many of my most memorable moments with Tony have involved singing. In fact, here’s a small snippet I was able to catch of Tony singing about the Gospel-preaching Wizard of Oz:

But, my favorite moments have to be the car rides. It is during these hours that Tony responds to some of my many questions about his life: “What was it like to march in the Civil Rights Movement?” “In the 1970s churches really didn’t care about social justice?” “How do you handle all the criticism?” “What was it like staying overnight in the White House?” Usually the answer contains a story, and typically it’s a story I haven’t heard before that frequently leaves me in a state mixed with curiosity and wonder.

Sometimes I forget the blessing that it is to work with Tony. It’s a blessing to hear the stories (even the ones I could now recite for memory on my own), to take in the experiences, and to journey with him around the world. I’m deeply grateful and I look forward to many many more.

Happy Birthday Tony! I do hope today is a wonderful day for you. And don’t worry, I will, of course, print this article out and let you see it, since the internet is still a good bit tricky for you.

Top Photo Credit: Brad Seifert – Dim7Chord — adding the party hat to the pic was all me.