What’s more American than corn flakes, the Fourth of July, and Uncle Sam?

These lyrics came sweetly from the lips of my seven-year-old daughter as we awaited a ranger program last summer at the Grand Canyon. They’re from a song that she learned at school, and it seemed especially fitting that she was singing them at that most American of landscapes in northern Arizona. But what she said next quickly shattered the moment.

“I’m not full American, because I’m not white. I’m Chinese.”

My heart sank. I knew this moment would come at some point in her life. It does for so many of us Americans of color, and it is painful. But I didn’t expect it to come so early for her.

“Did someone say that to you?” I asked.

“No,” she said, her eyes beginning to fill with tears.

I proceeded to gently explain the difference between nationality and ethnicity, and that while she was ethnically Chinese, she was just as American as anyone else.

“I already know that, Daddy,” she sniffled.

I put my arm around her and wondered, if no one said it to her, how did she get that idea at such a young age? Her school is two-thirds Latino and our church is majority Asian, so I could only imagine that it came from books and media she’d seen, where the vast majority of American heroes, heroines, and average Joes and Janes are white.

It’s mind-boggling to think that’s all it took! My wife and I have flooded our home with books that have ethnically diverse characters, especially Asian ones. And we go to some lengths every year to celebrate Independence Day in a bi-cultural way, inspired by author Janet S. Wong’s and illustrator Margaret Chodos-Irvine’s terrific kids’ book, Apple Pie 4th of July. (For the fifth year in a row, our family celebrated the Fourth by eating Chinese food, watching fireworks, and enjoying apple pie.)

That’s also why pointing our daughters to Asian American sheroes like the late Rep. Patsy Mink is something we do very intentionally.

But all are efforts are not enough:

But it’s still not enough to inoculate our girls against the subtle, yet powerful social message that to be fully American, you have to be white.

And they haven’t even started hearing the dreaded question that every Asian American eventually gets, usually multiple times: “Where are you from?”

Of course, the person asking that is nearly always assuming that we’ll name a country in Asia. If we respond with a place in the U.S., saying something like, “I’m from Texas,” the other person then almost always asks, “But where are you really from?”

I’ve never, ever heard anyone ask this of a white American. The subtle, micro-aggressive message, then, is that because we Asians look different, we don’t get to identify ourselves as fully American. Instead, we get “Where are you really from,” which sounds very much to us like we’re Americans, but not as American as others.

And may God have mercy on anyone that ever says to my girls, or sends to them, something like this: 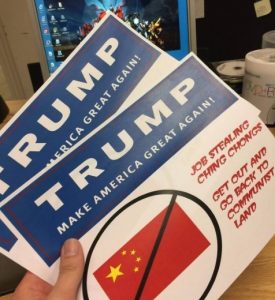 My daughters have never even been to China. I haven’t, either.

In George Orwell’s Animal Farm, there’s a saying that propagates among the animals as a small group of pigs takes over the farm: “All animals are equal, but some are more equal than others.”

That saying has haunted me during our current president’s rise to political power. His rhetoric and policy proposals have, in my judgment, made it clear that his administration favors folks who are white, evangelical Christian, wealthy, and straight. It’s as if the governing principle of his presidency is “All citizens are Americans, but some are more American than others.”

I think back to the song that my daughter was singing, “What’s More American.” It was popularized by Bing Crosby, a definite American icon, in the late 1960s, yet it was composed by Kadish Millet, a Jewish songwriter and schoolteacher from Brooklyn. Just last month, the kindergarteners and the first, second, and third graders at my daughters’ school performed the song.

Ironically, given my conversation with my seven-year-old at the Grand Canyon, the song lyrics include these lines:

It was quite a sight to see more than 200 boys and girls — three-fourths of them children of color — singing the entire song, declaring no thing and no one to be more American than they. My seven-year-old daughter was part of the group, and she sang every line with gusto.

I couldn’t help but see it as a gentle act of rebuke against the current president’s long history of villainizing people of color.

Just a few days later, at the school’s annual variety show, one of the first grade boys reprised the song as a solo, with a huge smile and a lot of personality. From the front row, in the seats reserved for the parents of the performers, his dad and mom — who wears a hijab as part of her Islamic religious expression — cheered him on.

I couldn’t help but see this as a declaration by a Muslim boy and his family that no one gets to deny them the fullness of being Americans.

This week, amid the sweet and sour tastes of apple pie and Chinese food, as well as the sparkly kabooms of fireworks, my heart will dwell on two things. First, I’ll rejoice that my daughters and the other children in my community are learning to claim their full birthright as Americans, regardless of the hue of their skin or the faith they practice. And second, I will recommit myself to fighting against every effort, overt or covert, to make any precious child of God feel less American than any other.

This article originally appeared in Huffington Post and was readapted with permission from the author.