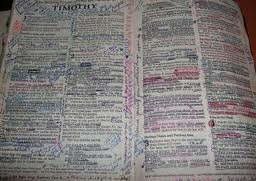 We are not Catholic, but for a variety of reasons we sent our daughter to Catholic schools.

In a high school religion class, the teacher approached my daughter during class, took her Bible and was horrified to see that virtually every page of her Bible had underlines, highlights and notes in the margins.

The teacher held it up for all the class to see and, with the condescending flair only teachers have, proclaimed to the entire class “Is this any way to treat a Bible?”

To put it mildly, this teacher was of the philosophy that the Bible should be revered, spoken of in hushed tones and, perhaps read quietly and soberly. Or perhaps not handled with earthly hands at all.

My daughter, on the other hand, looked at the Bible as a battleground – or even as a weapon to be used – not against others – but against the sluggish inertia and complacency that challenges us all.

Like Jacob, as he took on the name Israel, my daughter “wrestled” with God (Genesis 32:22-28) and her Bible, unlike the well-preserved relic of ancient times, showed the wear and tear of struggles of questions and unrelenting leaning on the word of God. Virtually every page showed the signs of struggle essential for a growing, stretching faith – the only kind of faith, I would say, that is worth having.

This kind of faith is built, stone by stone, struggle by struggle, not inherited or preserved like a fragile family heirloom.

This is the kind of faith that is never finished, never fossilized and never marketed like some easy religious slogan.

This is a faith more inhabited than memorized, more hand-crafted than mass produced, more gourmet than fast-food; more alive and mobile than stuck like a dead bug on a pin.

This is the faith that changes and challenges each one of us. And, no, it’s not safe, and it is messy.

Over and over in the Bible, God’s message to his people is to “Go” – to leave the assumptions of our comfortable faith and move into the unknown, to make our faith our own.

I understand all too well why so many would like to keep the Bible closed and safely kept on the shelf. There’s no telling where that pesky book might lead us.

Like the well-known children’s story of the Velveteen Rabbit, my daughter’s Bible showed signs of continuous use – and yes, love.

I know those scars of faith all too well. My faith journey has been anything but safe. I’ve encountered many things that would make my Sunday School teacher cringe, but I, and my faith stand far stronger precisely because of the storms and struggles I’ve been through.

There’s the old saying that a ship is safe in harbor – but that’s not why ships are built.

True faith should equip us to move, however reluctantly perhaps, where we would rather not go.

So, is that any way to treat a Bible?