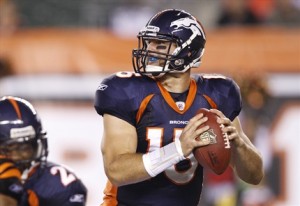 First, let me say that I am a Tim Tebow fan. If you had asked me what time it was on any given Saturday between 2006 and 2010 I would have told you it was Tebow time, because it almost always was. But I’m not a fan for the reason many Christians are. It’s not because he was home schooled (I’m not a fan of that). Nor is it because he is a Christian. I’m friends with a lot of Christians and I don’t have much interest in how far any of them can throw a football. I am a Tebow fan because I’m a Gator fan. I grew up less than an hour from the Swamp and have followed Florida football my whole life. I follow his career as a former Gator, and because he is one of the best players in the NFL.

With that said, I find Tebow mania among Christians profoundly annoying. Many Evangelical sports fans seem to care more about having a faith that is in everyone’s face than living a life that is consistent with Jesus’ teachings. I won’t go so far as calling his public prayer hypocritical, but for several years now I have wished that one day Tim would run out on the field with Matthew 6:5-6 written on his face. One would think that what Jesus has to say about prayer would mean more to a conservative fan base. I don’t want to be critical, and I won’t ever question Tebow’s Character, because by all accounts his private life is consistent with the way he behaves in public. He is a much better role model for children and teenagers than the average celebrity. With that said, I think his humility and Christ-like attitude off the field as well as the respectful manner in which he is interviewed does more to represent Christianity and the Kingdom of God than any face paint.

Tebow mania also touches upon a larger problem among conservative Evangelicals: A persecution complex. It seems like every time certain Christians don’t get their way they accuse people of oppressing them. This can range from not being allowed to teach pseudo-scientific theories of human origins in public schools, to laws being passed to prevent people from praying in schools. In this case Christians believe they are being persecuted when they get in trouble for “Tebowing” or getting on their knees in a public place (such as a crowded school hallway) and praying. Matthew 6 implications aside, the author of 1 Peter lays out a principle in chapter two verse twenty that says there is no credit for being punished for doing something wrong. Kids who block halls and endanger others are not being persecuted when they get suspended, no matter what they say they were doing. I think Christians who are being beaten and killed for their faith would agree.

I have often promised myself that I was not going to write about this. I hate joining internet bandwagons, especially this late in the game. However after Denver defeated Pittsburgh last night things got a little too silly for me to remain silent. Many people have interpreted Tebow’s 316 passing yards as some sort of portent, a sign that God has blessed the Broncos and ordained their victory. The idea that God is actively involved with the outcome of a football game while millions of people around the world starve is offensive. This not only gives people who are not Christians the wrong impressions about God’s priorities, it betrays a fundamentally flawed theology that equates blessing with faithfulness.

I hope Denver wins the Super Bowl this year. Being a Tampa Bay fan has been more depressing than usual this season and it would be nice to see Tebow win another championship. I hope, that when the season is over and people have moved on to other things, we will all be able to find a better way to honor God than to watch football just because we think God is a fan of a particular quarterback.

—-
Joe Perdue is a Master of Divinity student at Baptist Theological Seminary at Richmond. He blogs regularly at The Mainline Evangelical.