How should we respond when our democracy is being torn asunder in the name of our Christian faith?

Recently I answered the call of Faithful America and local clergy to go to Batavia, New York, where white Christian nationalists were gathering for the ReAwaken America tour, headlined by Michael Flynn.

What struck me first were multiple signs lining the driveway that read: “No Guns, No Knives.” Never in all my life have I seen any church that needed such a prominent reminder. The speakers at this Christian nationalist revival event used apocalyptic language to stoke the fears of thousands who had gathered there. The speeches touted anti-Semitic, racist, sexist and homophobic beliefs in the name of Christianity and were full of violent predictions of God’s vengeance befalling a wide range of political opponents.

Soon after I went to Arizona to settle my son into college and I joined some friends in the area to deliver supplies to migrants crossing the border in a remote region. Everywhere I went I found border communities and migrants harassed by QAnon and militia conspiracists. A local restaurant we visited for lunch had even posted a sign that read:

UNWANTED: Members of any vigilante or Border militia group | Do Not Enter our establishment | The management 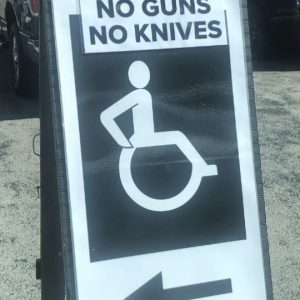 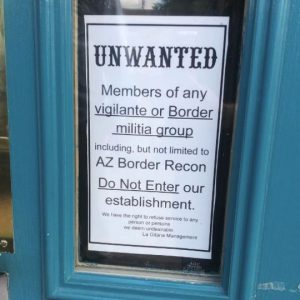 In both of these encounters, I was demoralized at seeing firsthand the threats of violence against our communities, but then heartened to find faith leaders mounting a vigorous response.

In Arizona, faith-based volunteers on both sides of the border risked their own safety to deliver much needed support to migrant families in danger, even in the face of militia and QAnon threats.

What we are up against is part of an old, even ancient struggle.

Throughout American and European history, Christian scripture and traditions have been used to justify domination systems. White enslavers removed half of the Old Testament to create the Slave Bible in order to justify their sin by suppressing the story of God freeing Hebrew slaves in Egypt. A Lost Cause history and theology developed after the Civil War to justify slavery, restore white southern pride and justify segregationist policies. You can read more about this in Robert P. Jones’ book, White Too Long. Throughout the twentieth century, white Christians burned crosses on lawns to violently intimidate and threaten their Black and Jewish neighbors.

Despite this legacy of white Christian nationalism, faith based movements have always risen up to counter these heretical systems of domination. From Harriet Tubman and Sojourner Truth to Martin Luther King, Jr. and Rabbi Abraham Joshua Heschel and so many more, faith communities were critical to countering and dismantling this ungodly worldview and working toward a true vision of multi-faith, multiracial democracy.

What does this teach us?

Most white Christians have not been taught that the entire Bible is a handbook for resisting tyranny.

For example, the creation story is a moral indictment of the creation myths of the ancient Near East which portrayed the gods as tyrants who created humans to be slaves. The Jewish creation story radically taught that God loved all of creation and made human beings in God’s own image–not to be slaves. This Jewish story laid the foundation for human rights and democracy, the best system for supporting our core value of human dignity (imago dei) for all.

Many white Christians have gotten caught up in demanding that the story is an accurate, scientific account of how the earth was made, rather than marvel at the moral vision conveyed by this story. Our Christian faith teaches that all of us are created in God’s image and are worthy of dignity and respect. Therefore, we must advocate for a multi-faith, multiracial democracy that protects human dignity and ensures everyone can thrive.

Today our faith and our dream of democracy are at stake, and both struggles are intertwined.

Our project of democracy is gravely threatened by white Christian nationalism deeply rooted in our nation’s history of slavery and segregation and Lost Cause Theology. Many candidates and elected leaders are embracing this ideology. Former White House officials are touring the country fanning the flames of violence and laying groundwork for a civil war in the name of an apocalyptic and violent version of Christianity, the very antithesis of what the faith stands for.

This heretical, anti-democratic movement may be gaining political prominence, but when we look at the numbers, those of us who believe in a multi-faith, multiracial democracy are in the majority.

We must continue to organize to ensure that our faith and our democracy are not hijacked by white Christian nationalists.

When I see the threat white Christian nationalism poses to our elections, our communities and our freedoms, I’m reminded of the words of the prophet Habakkuk.

“O LORD, how long shall I cry for help, and you will not listen? Or cry to you “Violence!” and you will not save? Why do you make me see wrong-doing and look at trouble? Destruction and violence are before me; strife and contention arise. So the law becomes slack and justice never prevails. The wicked surround the righteous– therefore judgment comes forth perverted.” (Habakkuk 1:2-4)

How do we respond to violence and injustice around us? Habakkuk’s answer comes in the next chapter.

“I will stand at my watchpost, and station myself on the rampart; I will keep watch to see what he will say to me, and what he will answer concerning my complaint. Then the LORD answered me and said: ‘Write the vision; make it plain on tablets, so that a runner may read it. For there is still a vision for the appointed time; it speaks of the end, and does not lie. If it seems to tarry, wait for it; it will surely come, it will not delay. Look at the proud! Their spirit is not right in them, but the righteous live by their faith.’” (Habakkuk 2:1-4)

Write the vision. Make it plain. Send it forth with a runner.

It is time we reclaim Scripture as a handbook for resisting tyranny.

All social change starts with the imagination. Scripture gives us a vision and enables us to imagine a different world and thus make it so. It connects us to biblical heroes who confronted the Pharaohs and Caesars of their day and prevailed against all odds.

Scripture is also a powerful communication tool to reclaim the public narrative of who we should strive to be as a nation, a nation that upholds dignity and freedom for all God’s children, regardless of creed, race, faith tradition, sexuality or gender.

The separation of church and state does not preclude our speaking out, it instead urges us to enter debates to make our case even as we urge respect for all faiths and those of moral courage. 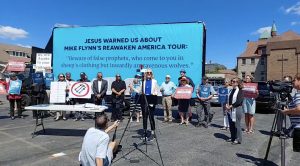 On November 8, we have an opportunity to make our vision plain. As people of faith, we must vote for candidates who are committed to create a world where everyone can thrive. We can take a step towards building a true multi-faith and multiracial democracy.

We can also make our vision plain by keeping our elections free and fair. Report any voting challenges you witness at your polling place to the national election protection hotline by calling or texting 1-866-OUR-VOTE. Join Faith in Public Life in committing to uphold and expand our democracy in this election and beyond.

We cannot cede the language of faith to anti-democratic and heretical forces to sway the vulnerable and capture the public imagination. It’s time to pray with our feet and our vote.

This is our moment to reclaim our faith for justice; to write the vision, make it plain and send it forth into our communities. Our democracy depends on it.