As Christmas nears and I hear all the traditional music, I think back to this past August when my wife, Susan, and I ventured off to Bethlehem on the West Bank to spend two and a half weeks consulting with the senior management team at the Diyar Consortium, based just a few blocks from Manger Square, on implementation of their strategic plan. Rev. Dr. Mitri Rahab, who was born just a few steps from the site of Jesus’ birthplace, leads Diyar, an organization he founded 25 years ago, whose mission is to build a more robust and resilient civil society with a “culture of abundant life, ’ rather than a culture of being “victims of The Occupation.” Today they are the second largest NGO on the West Bank and employ over 100 people. More about Diyar and how they accomplish their mission later.

The week before we left, the US Government announced they were closing all Embassies and Consulates in the Middle East due to security concerns. We were instructed to register with the State Dept. to let them know where we would be in Palestine, presumably so they could reach us in the case of an emergency. While we had visited Israel twice before and knew some of the associated risks, these recent events caused us to rethink our travel plans. After several conversations with people experienced in the region, we decided to continue with our plans to travel to Bethlehem.

Related: Bethlehem, Then and Now – by Rev. Dr. Mitri Raheb

We arrived just before sunset, so after we settled into our room I decided to venture out on the streets of the city. I walked out of the International Center that houses Diyar and made my way down toward The Church of the Holy Nativity. Bethlehem is an ancient city with narrow streets and stone buildings. There are numerous street vendors and tiny shops everywhere. While Bethlehem has a large Christian community compared to the rest of Palestine, they are still the minority. My Western clothes sort of stuck out, and while most street conversations were in Arabic, occasionally I heard English words. Most of the women were in various versions of Muslim dress, some very dark and conservative, others more youthful and colorful. For all the reassurances, I was very apprehensive as I walked. These streets have seen centuries of violence. In recent years Israeli soldiers have occupied the city and engaged in armed conflict. I was nervous about this foreign place and was rethinking my decision to be there. I circled back to the International Center where we were staying and settled in for dinner. 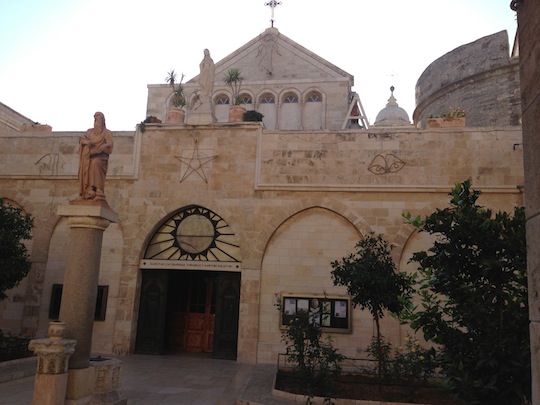 Church of the Holy Nativity – Bethlehem; Photo by Jim Hooker

The next 18 days proved to be an amazing experience as we acclimated to our surroundings and got acquainted with the people of Diyar Consortium and Bethlehem. Diyar is an impressive organization whose vision, articulated by Rev. Dr. Raheb is to change the way his country thinks, from being victims of a brutal, 46 year Occupation, to being able to build a positive, productive future, through education and positive civil actions. The components of Diyar include Dar al Kalima University, a health and wellness center, social service programs for children, families, women, and seniors all over the West Bank and the International Center, which includes extensive conference and banquet facilities, and guest rooms for visiting delegations. They serve over 60, 000 people each year.

While we were there a delegation of Lutheran Bishops and legislators from Denmark were visiting and engaging in various meetings both in Israel and Palestine. A group of 150 primary school teachers attended a four-day training session prior to the start of the school year. At the end of our stay Diyar hosted an International Conference of academics from all over the world who presented papers on Palestinian Heritage, attended the opening of a special exhibit of Palestinian art and artifacts donated to Beirzeit University, and met with local officials in Ramallah and Hebron.

I was fortunate to travel with many Palestinians all over the West Bank to experience life in the occupied territory. These people are charming and well educated, but their life under the rule of Israeli Occupation is challenging to say the least. Dr. Mitri Raheb, the Chief Executive of Diyar, is not allowed to travel the 8-10 miles through the security wall to visit Jerusalem because he is Palestinian and a Bethlehemite. When people want to go to Ramallah, the capital, they have to travel 2 hours out of their way around Jerusalem and the Israeli settlements and through numerous checkpoints to get there. So the day we went to Ramallah, that’s the route we took. (If we could have traveled directly through Jerusalem, as people could before The Occupation in 1967, the trip would have taken about 30 minutes.)

A Palestinian guide, who spent a day showing us around the area, stopped to point out a settlement where about 80, 000 Israeli settlers now live, built on land his family once owned that was confiscated. The homes built inside those walls were beautiful and high on the hill where they controlled the water resources for the entire area including where Palestinians live. They only allow Palestinians access to water a couple days a week, so they have to have large black tanks on their roofs to store the water for the days that Israelis turn off the supply. The guide pointed to another vacant hill and said that is what it looked like before the settlement was built. He predicts that land will also one day be covered by settlement growth, as the Israelis systematically take over the occupied territory in direct violation of UN Resolution 242, which prohibits such settlements. 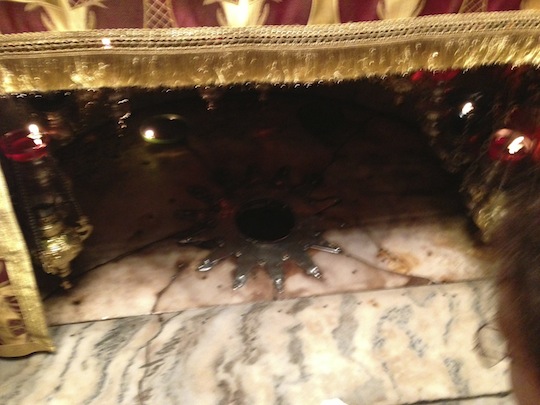 Traditional birth spot of Jesus in Church of the Holy Nativity; Photo by Jim Hooker

Related: Women in the Holy Land, Just Like Me – by Lynne Hybels

Programs like those run by the Diyar Consortium are designed to give people hope, but also to give them skills so that they can be self employed as artists or jewelry makers serving the tourist industry, or in the growing local computer and media industries. They are also becoming influencers of a culture of hope on The West Bank, as they await the prospect of a future peace.

On our last evening there I went out for a walk again down the hill toward Manager Square and into the Church of the Holy Nativity. The tour buses had left, and there were only a handful of people visiting the sight of the birthplace of Jesus. Several people recognized me because I had taken this walk many times by then. They smiled and said, “Hello.” I stopped several times and engaged in conversations about the US and their homeland. Just as I was leaving I started to feel at “home” in this distant place. What a difference 2 1/2 weeks could make. My prayer for them and for our world this Christmas is that the peace of the Christ Child, The King of Peace, will fill our world with joy and with the determination to bring an equitable peace to these people at long last.