When Jesus said that those who visit prisoners are actually visiting him, he made no mention of how to get behind bars. Jack Heller, who teaches at Huntington University, has discovered one creative way…

Jack, tell us about your foray into prison.

Shakespeare Behind Bars has been a group of prison inmates at Kentucky’s Luther Luckett Correctional Complex performing plays since 1995. In 2007, I went to see the men do Measure for Measure. The play was performed in the prison’s visitors room, a space as unlike a theatre as anywhere I have ever seen a play—florescent lighting, linoleum tile floors, plastic patio chairs, and ringed with vending machines. After seeing this play, I had to get involved in working with prison theatre programs, volunteering regularly with Shakespeare Behind Bars in both Kentucky and Michigan.

In October 2013, inspired by Laura Bates’s memoir Shakespeare Saved My Life, I began a Shakespeare program at a maximum-security prison 20 miles northeast of Indianapolis, Shakespeare at Pendleton. In early November we chose to work on Shakespeare’s lesser-known last tragedy, Coriolanus. It has been thrilling to work with a dozen men enthusiastic for a Shakespeare play.

Since that first visit, has there been anything about building relationships with people who are incarcerated that has surprised you?

One of the men I work with in Pendleton, who seems to be in his late 20s or early 30s, has a sentence of life plus 100 years. I prefer not to guess how a person gets a sentence like that. Sometimes the inmates will tell about their crimes, and I am willing to know if they believe it is important for me to understand them. But the inmates have been very willing to let me know about their lives in the prison, their relationships with each other, and their sentences. And, contrary to the common image of inmates, not one has ever tried to persuade me of his innocence of the crime for which he is doing time.

Our interactions are not about their pasts, but are about our present. Shakespeare gives us a way to examine our pasts from an objective distance, so that we can recognize the roles our pasts have played in our current lives without being enslaved to those pasts.

And how have you seen prisoners respond?

In 2011, the Shakespeare Behind Bars men in Kentucky were working on Romeo and Juliet. One of the men arrived at my summer seminar announcing that he had already memorized all of the lines and that he was going to play Juliet, end of discussion. As far as the other men were concerned, he could have the role. Not that the men there are reluctant to take on female roles, but Juliet is more romantic and “girly” than most of Shakespeare’s female roles. 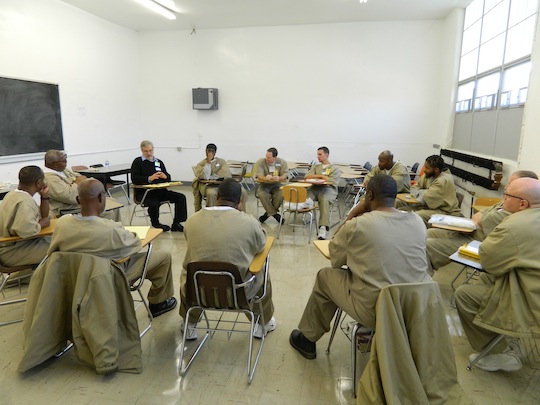 I later learned that this inmate had been a white supremacist, with a number of neo-Nazi tattoos, serving a life sentence for murder. When I returned to the prison with a group of Huntington University students, I asked him why he had chosen the role of Juliet. He said that he had been raised in and lived in an environment of hatred, and now he wanted to learn what love is. He wanted Juliet to be his mentor for love. He said this choking back his emotion.

When I saw the men perform Romeo and Juliet, the revelation came when I saw how many scenes Juliet has with Friar Laurence, who was performed by an African American man. I think the former supremacist’s performance of Juliet working collaboratively with Friar Laurence has helped him to come to terms with and move beyond the racist hatred of his past.

I am still getting to know the men in Shakespeare at Pendleton, my new effort. We have chosen to work on Coriolanus, Shakespeare’s tragedy about anger. Already, we have had several beautiful moments. One inmate who had heard about the new program memorized Portia’s monologue from The Merchant of Venice, beginning “The quality of mercy is not strained” (4.1). When he joined us, we let him perform the monologue, and we followed it with a discussion of how Portia’s idea of mercy contrasts to the desires for vengeance expressed at the very beginning of Coriolanus. That lively discussion is what prison theatre practitioners live for.

So what’s the end game? Are these guys heading to Broadway upon release? How does it impact them?

A good prison theatre production is equivalent to a high-quality community theatre production. However, the goal is not to put on a good show. The goal is our transformations. One of the early transformations is typically intellectual—“Hey, I can understand and appreciate this stuff.” With that intellectual growth comes a transformation in the inmates’ understanding of themselves. They have an enriched vocabulary for expressing their ideas and emotions, and for interacting with each other. No longer are they just convicts; they are creating part of the beauty of this world.

What has been the reaction of college students who’ve joined you at the prisons?

I have brought students to rehearsals and performances from the beginning of my involvement with Shakespeare Behind Bars, and I expect I’ll be able to involve them at Pendleton in 2014. Several things have surprised the students: how well the men understand Shakespeare, the camaraderie and love that the men have for each other, and the stark and emotional honesty the men have shown about their pasts and their imprisoned lives. Hearing an inmate say that he has been behind bars for 37 years is bound to have an impact.

I have mostly brought social work students to the prisons, and in a few instances I believe some have graduated to work with ex-offenders. Another impact I have been proud of is that one of my former students has arranged to have his folk rock band do shows in the prisons. Many students who have taken a prison trip have told me that it was the most significant field trip of all of their school experiences.

These guys aren’t performing Godspell or Jesus Christ Superstar. It’s not a recognizably “Christian” program. What role, if any, does faith play in this? 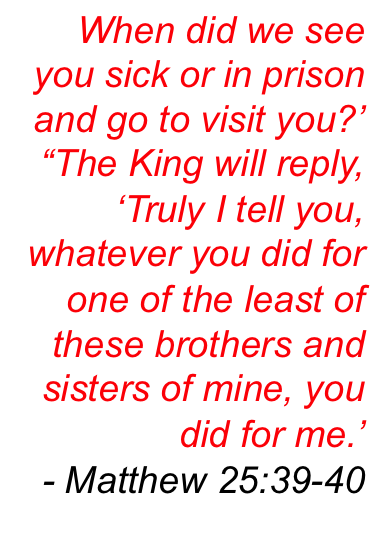 Shakespeare uses the word “grace” and all of its related variants over 900 times. Furthermore, as Portia’s “quality of mercy” monologue in The Merchant of Venice, Dogberry’s “condemnation” of prisoners to “everlasting redemption” in Much Ado about Nothing, and Hamlet’s allusion to Psalm 8 (in 2.2) show, Shakespeare was consistently interested in grace, salvation, love, and faith. Although Shakespeare was a Christian, his plays show he was far more interested in investigating what these words and concepts mean rather than asserting their meanings. In this, Shakespeare has been the quintessential Christian humanist, and thus, achieving a reach far beyond an audience limited to Christians.

The frequent complaint against prison religious conversions is that they are not real, that they are occurring only so that the inmate can get off the hook. When an inmate commits to doing Shakespeare, it requires a change, analogous to a conversion, in the way he spends his own time. It requires him to interact differently with other people. It challenges his way of thinking. This kind of commitment carries over into other areas of his life, and I think it is related to the low recidivism of ex-offenders who have done Shakespeare.

In Matthew 25, Christ praises those who visit the prisoners, and the meaning of the passage is that those who visit the prisoners intend to look after their well-being. Our prisons are warehouses of troubled souls, and to change our rates of incarceration, we have to strive towards wholeness, for both those who are incarcerated, for those on the outside in troubled situations, and yes, for ourselves, letting the inmates know our weaknesses and strengths and struggles. Christ puts visiting the prisoner alongside of visiting the sick. To look after inmates’ well-being is not to believe that their only needs can be narrowly defined as a need for religious conversion. My hope for Shakespeare at Pendleton is that we will help every participant towards whole personhood.

And so I don’t forget: Please give me the link where you’d like to direct folks!