Today (October 4), Christians around the world remember one of the great heroes of our faith, and the Pope’s namesake – Francis of Assisi.  But Francesco Bernadone (Francis of Assisi), who died on October 3, 1226 must be laughing at the irony of it all.

He was one of the first critics of capitalism, one of the earliest Christian environmentalists, a sassy reformer of the church, and one of the classic conscientious objectors to war. Even though it’s hard to imagine a saint whose life is more relevant to the world we live in today, Francis was not always so popular.

Legend has it, the first time he preached at the Vatican, the pope told him to go preach to the pigs. But later the pope had a vision: the corner of the church was collapsing, and little Francis and the youth of Assisi were holding it up. Arguably that youth movement was one of the most powerful restorations of church history. While he did not hold back on his relentless critique of the church, he remained humbly and hopeful.  He stopped complaining about the church as it was and started dreaming of the church as it could be.  As Francis said, he heard God whisper: “Repair my Church, which is in ruins.”

So perhaps it’s Providential that 800 years later the Pope is named after him.

And for those of us that aren’t Catholic, he’s worth remembering today.

Francis was the son of a wealthy cloth merchant, born into a society where the gap between the rich and the poor was increasingly unacceptable. It was an age of religious crusades, where Christians and Muslims were killing each other in the name of God. The Church and the world were in chaos… Sound familiar?

Also by Shane: What if Jesus Meant All That Stuff?

Francis did something simple and wonderful. He read the Gospels where Jesus says, “Sell your possessions and give the money to the poor, ” “Consider the lilies and the sparrows and do not worry about tomorrow, ” “Love your enemies, ” and he decided to live as if Jesus meant the stuff he said. Francis turned his back on the materialism and militarism of his world, and said yes to Jesus.

One of the quotes attributed to Francis is a simple and poignant critique of our world, just as it was to his: “The more stuff we have, the more clubs we need to protect it.  Be free like the lilies and the sparrows.”

With a childlike innocence, Francis literally stripped naked and walked out of Assisi to live like the lilies and the sparrows. He lived among the outcasts and ostracized.  He lived close to the earth and, like Jesus, became a friend of the birds and creatures, whom he fondly called brother and sister. In light of that, many a birdbath wears his iconic image.  But his life is worthy of more than a lawn statue.  His life was a powerful critique of the demons of his day, which are very similar to the demons of our day.

One of my favorite stories about Francis was when he decided to meet with the Muslim sultan during the Fifth Crusade – in Syria of all places. It was a tumultuous time. War had become a necessity and a habit, and was sanctioned by much of the church. Francis was sent off as a soldier, but he could not reconcile the violence of war with the grace of Christ . . . and so he got off his warhorse and put down his sword. He pleaded with the military commander, Cardinal-Legate Pelagius, to end the fighting. Pelagius refused. Instead, Pelagius broke off all diplomatic relations with the sultan of Egypt. The sultan in turn decreed that anyone who brought him the head of a Christian would be rewarded with a Byzantine gold piece. Francis, however, pursued his vision in steadfast faith, surmounting all dangers in a journey to see the sultan. He traveled through fierce fighting in Syria and inevitably was met by soldiers of the sultan’s army, who beat him savagely and put him in chains, dragging him before the sultan himself. Francis spoke to the sultan of God’s love and grace. The sultan listened intensely and was so moved that he offered Francis gifts and money. Francis, of course, had no desire for the money, but he gladly accepted one gift, an ivory horn used in the Muslim call to prayer. He took it back with him and used it to summon his own community for prayer. Both Francis and the sultan were transformed by that encounter, offering much hope to our world of troubled interfaith relations.

Although the church is prone to forget his witness or to make a monument of his movement, we can still celebrate his critique of an economy that left masses of people in poverty, so that a handful of people can live as they wish. We still rejoice in his love for the earth as we work to end the ravaging of our world. We remember his witness that there is a better way to bring peace than with a sword. 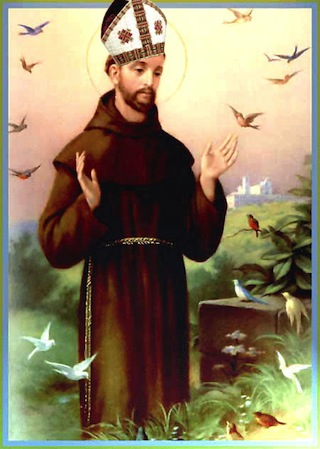 These are the words of the famous prayer attributed to Francis. May they inspire us to become better people and to build a better world, right alongside Francesco Bernadone of Assisi and Pope Francis of Argentina.

Lord, Make me an instrument of your peace.

Where there is hatred, let me sow love.

Where there is injury, pardon,

Where there is discord, union,

Where there is doubt, faith,

Where there is error, truth,

Where there is despair, hope,

Where there is sadness, joy,

Where there is darkness, light.

O Divine Master,   Grant that I may not so much seek to be consoled as to console;  to be understood as to understand;  to be loved, as to love;  for it is in giving that we receive,  it is in pardoning that we are pardoned,   and it is in dying that we are born to eternal life. Amen

NOTE:  FOR A GOOD FLICK ON FRANCIS, CHECK OUT THE CLASSIC “BROTHER SUN, SISTER MOON”