Via RNS — Sister Helen Prejean wants to get religion “right.”

But too often, she said, people use religion, including Christianity, for the wrong reasons.

That includes Scripture used by politicians to justify separating families at the border, said Prejean, 80. Or Jesus’ death being used by Christians to defend the death penalty.

Or thinking that praying for justice is the same as acting for it.

“It took me a long time to get Jesus right,” she said.

“It took me a long time to not just live Christianity as practicing charity to those around me who were pretty much people just like me, to getting involved with justice, which is the true call of the gospel.”

That desire to get it right prompted Prejean — an anti-death penalty activist whose book “Dead Man Walking” was the inspiration for the Oscar-winning 1995 film by the same name — to write her latest memoir, River of Fire.

In the new book, which ends where “Dead Man Walking” picks up, the sister describes her journey to the Sisters of St. Joseph — and how religious life changed after Vatican II.

Prejean talked to Religion News Service about how she became involved in social justice, why she thinks the death penalty is on its way out and how she got to “bump into two popes along the way.”

You’ve been part of the social justice movement for a long time. How did you get involved?

I basically would pray to God to solve the big problems, but I was never engaged directly in social justice. And so I tell in the book about awakening, being jolted out of that. The line that got me was, “Jesus preached good news to the poor.”

The good news to poor people was that it wasn’t God’s will for them to be poor. That they had a right to strive for what was rightfully theirs and to have a decent life. In other words, poverty had to be resisted, not just something accepted because God’s going to reward you in another life. You have to work for justice.

When I heard that, I didn’t even know any poor people, and I lived in New Orleans. We had 10 major housing projects for poor black people, and I’d never been to any of them. I was always in the suburbs with other white people like me. God helped wake me up (and realize) that the gospel was about being on the side with people who had no voice, anyone marginalized and who was struggling.

Then I began to learn. I realized that to work for justice, you can’t just pray for God to solve these problems, you’ve got to get involved.

So to get an invitation to write about a man on death row kind of just fit in.

Capital punishment has been back in the news with Attorney General William Barr reinstating the federal death penalty. But you’re actually hopeful about ending the death penalty. Why?

Pope Francis on Aug. 2, 2018, made a declaration that we’re changing the Catholic catechism that under no circumstance could we ever allow state governments to execute their citizens.

The work still needs to be done. So now you’ve got a document. Now you’ve got words on a page. You’ve still got to bring words to life.

What happens in countries or states is first you see the practice dwindling because people are losing faith in it. You see that happening across the whole country. 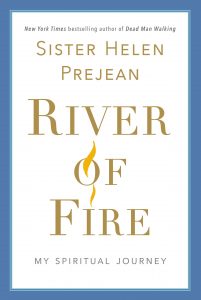 In the book, you also include a letter you wrote to Pope Francis advocating for the role of women in the church. Why is this so important to you?

The death penalty — OK, we’re on the right path. We’re getting that straight, but there’s a huge, huge, huge injustice in the Catholic Church.

In the church, a woman cannot read the Gospel at Mass. Only a man can. Women are not part of any of the policymaking at the highest level of the church. And I say in that letter to the pope, we have all males, always all males, making decisions, and they don’t have the voice and experience and wisdom of women across that table with them.

We need the wisdom of women in policymaking and decision-making in the Catholic Church. Eventually it will be the priesthood, too.

How do you hold on to joy and faith in the face of the death and injustice you’ve seen?

That comes from the Holy Spirit. It’s not something I create and just hold on to. It bubbles up in you. It becomes present in you.

And I think it comes from walking out of that execution chamber after witnessing six human beings die.

I am working with every bit of strength in my body to change that, to wake up the people. What gives you hope is when you’re working for something. When you’re working on the alternative, you’re not just wishing for it. You’re not just lamenting what is wrong. You’re working. You are at work all the time, and then the hope flows through you. And I think that’s where the joy comes from.

I mean, there is tremendous grief. Oh my God. I mean, witnessing people being executed — to see it! You meet them, and they’re human beings, and they’re more than the worst act of their life.

Did you ever expect you’d be doing what you do or have a movie made about your work?

There is a principle of the spiritual life: You do what you do because of the integrity of it, because of what you see, and not for the fruit of it. You leave the fruit of your actions up to God. So, of course, I never knew all this was going to happen, and it took me awhile to wake up.