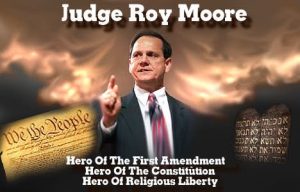 I have seen a vision of the future of relations between evangelical Christians and Mormons.

It’s going to be sweet.

This vision came, of all places, at Tuesday’s pro-life rally when an old Catholic brother held aloft a poster of the Virgin Mary.

Brother Joseph Kreutzer, a monk, was one of the last speakers after an hour of speakers who had celebrated the preciousness of infants and decried the sinfulness of doctors and others who engage in abortions.

When he began his closing prayer, he raised a framed, faded poster of the Virgin of Guadalupe, holding it in his trembling hands while he prayed.

To hear a prayer to the Virgin Mary said with this image raised aloft – next to a poster listing the 10 Commandments from the Protestant Bible (No. 2: Thou shalt not make unto thee any graven image…Thou shalt not bow down thyself to them nor serve them) – and to be standing, as I was, next to former Judge Roy Moore, the Bible-quoting morality promoter known nationally for his zeal in highlighting those 10 Commandments – was amusing.

But – and here’s the point – neither the judge nor any of the evangelical Christians circled under the courthouse’s high portico rushed the little holy man to take away his poster. Many bowed their heads respectfully, and many added a loud “amen” at the end of his sweet prayer.

So what does this have to do with members of the Church of Jesus Christ of Latter-day Saints – The “cult” so scary that for Franklin Graham to say it’s OK to vote for a Mormon has brought calls for Graham’s repentance?

Slowly, the reservations evangelicals have about Catholic theology have evaporated, or at least thinned to a vapor wispy enough for them to see through it to the man.

A century ago, Mormons were depicted in American discourse as, pretty much, treacherous, demonic characters. They and Catholics were, arguably, as despised as were Jews. But Catholics, largely because of their unflinching leadership in the pro-life movement, have moved into the mainstream of American religious thought.

Meanwhile, the quieter Mormons have been busy with their work. their families, their missions, their congregations.

Their first notable sally as a group into politics, during the 2008 California referendum on gay marriage, was clumsy.

But, y’all: I know Mormons. A truly safe generalization about them, as a group, is that they make terrific neighbors. They’re excellent managers of their businesses. They’re good singers, skilled cooks and the backbone of the Boy Scouts these days.

And I’ve prayed with Mormons. Nothing during those prayers, however Mormons understand the nature of Christ, interrupted my own Presbyterian ability to pray any more than Bro. Joseph’s directing a prayer to St. Mary interrupted the ability of that evangelical crowd to pray.

Theology does matter, of course, but arguably much less than what a person does. Isn’t it the fruit of the tree, not the color of the leaves, that matters in the end?

What does a candidate do? That’s the question to be asked, not the details of his theology.

So let me make a prediction about the future of Mormon-evangelical relations: There will come a day when Mormon leader will be asked to make a public prayer at one of the public religious events some American Christians love to organize. And those present will bow their heads in respect, even if they think the theology is wrong.

And there will come a day when evangelical Christians will endorse a Mormon candidate on the basis of what he or she plans to do, not on how he or she prays.

And things will be fine – or, at the least, things will be no more messed up than they ever are when religious leaders of any stripe start messing around in politics.

—-
Kay Campbell is Faith & Values editor and reporter at The Huntsville (Alabama) Times and an ordained elder in the Presbyterian Church (USA) because, obviously, they’ll take anyone. Most recently, she was awarded the 2011 Award for Commentary from the Religion Newswriters Association. You can reach her via email at: [email protected]