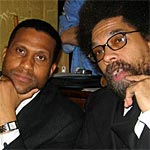 I am so thankful for the poetic words and witness of brother Cornel West.

If you have yet to hear Cornel West and Tavis Smiley’s conversation on Obama’s response to the assassination of Bin Laden it is a must.

Thanks to my mate Wes Howard Brook who rang today and asked if I had listened yet.

Below are some great quotes from the conversation which you must listen to! Underneath the quotes is a link to the interview itself:

“Justice does not come out of the barrel of a gun.”

“I don’t believe in moral regeneration through violence, or the ethical revitalization through the celebration of violence.”

“You and I take seriously the legacy of Martin Luther King…it means then that we must be dissenting voices in the middle of a moment of such self celebration and self congratulation, to say quite explicitly that justice does not come out the barrel of a gun.”

“So when the President says ‘justice was done’, no, no, no, no. It was retaliation and revenge. Now, there is a sweetness in revenge because people are hurt. People are wounded. But we must be spiritually mature enough to know that justice cuts much deeper than that. And that’s what Martin Luther King Jr. has been trying to tell us.”

“There is not justice on this side of the Jordan in this sense; that you are never going to get back what you lost.”

“War is the enemy of the poor.”

Click here to listen to the full interview. . .Enjoy!!