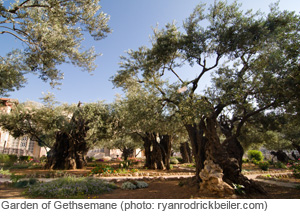 At Calvary, we see what the power of Satan can do. We observe the demonic nature of political and religious power infused by evil. The Roman governor and the Hebrew king, on the one hand, and the priests and scribes of the religious system, on the other, conspired together to destroy the Son of God.

But on the cross, all their claims of being agents of goodness were stripped away. The principalities and powers were exposed as the power-hungry agents they really were (see Col. 2:15). The cross showed how the depraved nature of demonic powers can be expressed through the rulers of this age. It also demonstrated the love of God in its most perfect form. On the cross, power was confronted by sacrificial love.

On Good Friday, it looked as though power had won. The demonic hosts must have danced in celebration. But they had counted the spoils of their victory too quickly. Two days later, the stone was rolled away and the incarnation of sacrificial love was resurrected. History, from then on, would have hard evidence that love ultimately triumps over power. The resurrection proves that love is greater than all the power man and Satan together can muster.

The resurrected Christ still endeavors to effect change through love. He does not coerce us into His kingdom, but lovingly entreats us. He does not force Himself into our lives, but instead says, “Here I am! I stand at the door and knock. If anyone hears my voice and opens the door, I will come in and eat with him, and he with me” (Rev. 3:20).

One of my favorite old gospel songs has as its first line, “He could have called ten thousand angels.” This so wonderfully explains the style of Jesus. As He hung on the cross, the Pharisees and priests mocked HIm, yelling that if He was the Son of God, He should come down from the cross–and then they would believe in Him (see Matt. 27:40-42). There is no question that He could have done just that. What is more, He could have snapped His fingers and had 10, 000 angels in shining raiment appears instantaneously by His side, armed to the teeth, to wreak destruction on those who had mocked Him. But that was not His way. Love kept Him nailed to the cross. He refused to use His power so that He might reveal the love of God in its ultimate expression.

There will come a day when He will come again. On that final day, a trumpet will sound and He will unleash His power on the earth. But on that Good Friday 2, 000 years ago, it was not His power, but His sacrificial love that was at work.