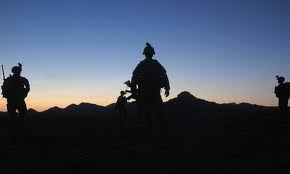 Last evening, President Obama made his long-awaited announcement on beginning withdrawal of the 103, 000 U.S. troops from Afghanistan.  The president announced that 10, 000 of these troops will be withdrawn by the end of this year, starting in July, and 23, 000 more by the end of summer 2012.

That will leave approximately 70, 000 troops in Afghanistan, roughly double the number of troops (34, 000) when he took office in 2008.  The president said these remaining troops will be withdrawn “at a steady pace” going into 2014.

But that’s not good enough.   President Obama had an opportunity to pivot his policy on the war in Afghanistan — to focus on the still real threats of terrorism, rather than on failed wars of occupation with massive numbers of troops on the ground. Public opinion polls now consistently show that 50 to 60 percent of the American people want the troops to come home. Two-hundred-four members of the House, from both parties, voted in late May for the McGovern-Jones amendment — which calls for an accelerated withdrawal and a responsible exit from Afghanistan.  Two members of Congress, Jim McGovern and Walter Jones, one Democrat and one Republican, were the authors of that measure and have been the real leaders of political and moral conscience on this war.  Twenty-eight bipartisan senators also called for an accelerated withdrawal in a recent letter to the president.  A wide array of political leaders, from both parties — including senators Carl Levin, Max Baucus, and Richard Lugar, and Republican presidential candidates Jon Huntsman, Mitt Romney, and Ron Paul — are expressing reservations about the war strategy. Obama could have built on these changes in public opinion and announced a dramatic change in war policy for Afghanistan. But last night, he did not.

We constantly hear the message, “Support the troops.”  It’s on bumper stickers, at ball games, and on banners in airports. As a Christian who opposed the two wars our troops have been fighting in Afghanistan and Iraq, I can say that I do support the troops.  They are primarily young, from lower-income and working families, who in the current economy have few other options. The military promised them the opportunity for a job, training, and perhaps the chance to go to college on their return.

But that promise to young people with few other options came at a high price.  So far, 1, 552 Americans have died in the war in Afghanistan; 11, 200 have been wounded. In one study of the 300, 000 returning veterans from Iraq and Afghanistan who sought help from Veterans Affairs health centers, nearly 37 percent of those treated for the first time were suffering from mental health problems such as post-traumatic stress disorder, depression, or alcohol problems. These problems too often result in suicide. During the first half of 2009, more American soldiers committed suicide than were killed in combat in Afghanistan and Iraq. In June 2010, an average of one soldier a day committed suicide.  Furthermore, 11 percent of Iraq and Afghanistan veterans are unemployed.

Of course, there are very few children of members of Congress, or of finance and business executives, in the military.  Those who run the country are not sending their children to fight the wars they continue to prolong.  Frankly, war is good business for those who run the military-industrial complex that former President Eisenhower warned us about.  Generals always recommend more war because it’s their business.  It gets them promotions and advances their careers.  And they often distort the facts to stay in business — claiming progress in order to justify continued war — when there really is no significant progress at all. Meanwhile, more young people get killed or damaged for the rest of their lives, and the cost for so many innocents is even higher. That can simply no longer be justified in Afghanistan.

The president acknowledged and honored the sacrifice of the troops, and said we need to shift from nation-building in Afghanistan to nation-building at home. But the meager reduction of troops he announced last night simply doesn’t support either goal. I heard on Morning Joe this morning that John McCain has more staff on Capitol Hill than the CIA reports al Qaeda now has in Afghanistan.  And the threat of Bin Laden was not ended by the war in Afghanistan, but by focused intelligence and counter-terrorism in Pakistan. Yet, after the president’s announcement last night, the United States will still have nearly 100, 000 troops in Afghanistan for the rest of this year, and will spend more than $100 billion in the coming year. It seems the war in Afghanistan will go on and on and on.

To truly support the troops who are fighting and dying in Afghanistan, we must commit our resources where they are most needed. We must make the courageous decision to end the war in Afghanistan much faster than the president called for last night. Incremental and gradual drawdowns of troops over many years is not the correct response to a failed war. We needed a pivot to a new policy last night — but we didn’t get it.

The president’s decision to finish his first term with twice as many U.S. troops in Afghanistan as when he took office is a political and moral mistake.  This week, nearly 40 religious leaders delivered a letter to the White House saying “we are united in the belief that it is time to bring the U.S. war in Afghanistan to an end.” We must now build on that to mobilize resistance to the war across the religious community. It’s time for the faith community to help lead the movement that will bring this unnecessary and unjust war to an end. The president’s message last night was “the war goes on.” Our message on Afghanistan must be: War No More.

+Click here for Sojourners’ FREE “War No More” bumper sticker as a gift for your involvement!

—-
Jim Wallis is the author of Rediscovering Values: A Guide for Economic and Moral Recovery, and CEO of Sojourners. He blogs at www.godspolitics.com. Follow Jim on Twitter@JimWallis.

The post is provided via our partnership with Sojourners.