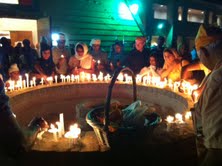 ” height=”166″ />I wasn’t sure what to expect as we pulled into the parking lot of a local Sikh Temple last Wednesday night, but I assumed it would be culturally enlightening and offer a glimpse into a worldview and religious tradition I have only sparingly engaged. While Wednesday was the National Day of Remembrance and Solidarity for the victims and mourners of the temple shooting in Wisconsin, I felt deeply compelled to stand with them in their pain as a follower of the Prince of Peace.

Walking into the Temple’s courtyard holding my two-year-old daughter’s hand, my wife and two friends were immediately greeted by the priest with a handshake and smile. He thanked us for coming and invited us into the experience that included a short service in the Temple and vigil outside to remember the six worshipers who were shot by a man that had never met them. I can only speculate, but if this man would have engaged these people on a relational level at any point, he certainly would have reconsidered his actions.

Much like the response of the Amish after the horrific schoolhouse massacre in ’06, the Sikh community has intentionally chosen to respond by offering radical love and forgiveness. Although somber, they carried a deep conviction to embrace the way of peace as retaliation for the death of these innocent victims.

Having been handed a head covering and a candle, we slowly walked by the pictures of the victims and read their stories. One, a women who had come to the United State only five years ago, worked 11 hours a day in a factory to raise enough money to support her family. She was known for staying late at the Temple to make food for those in need and regularly sat at the bed of the ill in a local hospital. Another was an 84-year-old man who had recently lost his wife and would walk two miles each day to pray at the Temple and serve food to the hungry. The stories went on and on… 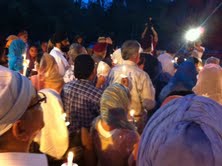 As we read and looked into the eyes of these victims, our hearts broke and we were transported into the life of those who often are stereotyped, persecuted and isolated because of their adherence to a faith tradition that isn’t “normal” to many of us in the West. It was tragic, angering and painful.

Gathering to start the vigil, one of the congregants walked up to us and again thanked us for being there and invited us to stay after for a shared meal. Lighting our candles, the vigil began with a prayer and was followed by six different children reading the story of each victim. To close, the priest led us through one more prayer, and speaking against the blind stereotype and prejudice that is pervading our country, said, “As Americans, this is how we learn about each other.”

So why did I go to a Sikh Temple last week? Because as a follower of Jesus I am called to stand with the victimized, the oppressed and hurting. It is what I’m here to do and the very essence of who I am as one “in Christ, ” to quote the Apostle Paul. The victims don’t have to fit into our box or adhere to the same belief system, faith or worldview. No, those are not things we are to concern ourselves with, because in then end, we are all humans in need of community and love. In standing with people in times like these we get a glimpse into the New Creation that was set forth in Jesus’ Resurrection. We are to be Resurrection people who reflect what God has in mind of humanity. These are opportunities for us to be fully human.

May we be a people who repent from blind prejudice and stereotype by diving deep into relationships with people that are “different” than us. May we humble ourselves to learn from those that teach us how to seek reconciliation and offer radical forgiveness. And may we always choose to first see others through the eyes of a Jesus who invites all humanity to his Kingdom banquet.

—-
Jon Huckins is on staff with NieuCommunities, a collective of missional communities who foster leadership and community development. He also co-founded The Global Immersion Project which cultivates difference makers through immersion in global narratives. Jon has a Master’s degree from Fuller Seminary and writes for numerous publications including, theOOZE, Burnside Writer’s Collective & Red Letter Christians. He has written two books: Thin Places: Six Postures for Creating and Practicing Missional Community (Beacon Hill) and Teaching Through the Art of Storytelling (Zondervan). He lives in San Diego with his wife Jan, daughter Ruby. Jon blogs here: http://jonhuckins.net/. You can also follow Jon on Twitter and Facebook.