On Monday,  Christianity Today reported on a shift in World Vision’s employment policy in regards to sexual morality. World Vision is a Christian organization dedicated to serving impoverished children, and has always held a pretty rigid code of morality for employees. Specifically, employees are not to engage in sex outside of marriage. But recently, the organization decided that it would not discriminate against professed believers in a legal, same-sex marriage, . World Vision did not take a public stance on scripture or same-sex marriage, but rather chose to remain neutral on what CEO Stearns describes as a divisive issue among Christians.

“It’s easy to read a lot more into this decision than is really there. This is not an endorsement of same-sex marriage. We have decided we are not going to get into that debate, ” Stearns said. “Changing the employee conduct policy to allow someone in a same-sex marriage who is a professed believer in Jesus Christ to work for us makes our policy more consistent with our practice on other divisive issues.”

News of this policy change spread like wildfire, with many Christians applauding World Vision’s decision. Still, others were quick to denounces World Vision, threatening to drop the children they sponsor though the organization. Several Christian leaders were vocal with their disapproval. Justin Taylor of the Gospel Coalition, Russell Moore, president of the Ethics and Religious Liberty Commission of the Southern Baptist Convention, and Denny Burk, professor at the Southern Baptist Theological Seminary (and apparent self-appointed gatekeeper of Christiandom) had condemning responses up within hours of the news.

This response is disheartening to me on many levels. First, because I don’t believe that World Vision really even took a stance on gay marriage. They are an aid organization dedicated to ending child hunger. In my opinion, their employee mandates are what I would expect for church employment, but a bit rigid for a non-profit working on poverty issues. My view is that as Christians, we should be willing to partner with anyone wanting to advance our call to help the poor. You have 13 sexual partners each week but you want to help me build a school in Haiti? Alright. Get your work shoes on. Of course, it is Word Vision’s prerogative to hold the standards they do, but for me to lend support they are unnecessary. I don’t live in a world where I require everyone I do business with to follow my exact moral code.

But I’m also dismayed because I suspect that none of this would have been front-page news or worthy of outrage if World Vision had simply removed their rules about employee sexual conduct in general.Somehow, same-sex “sin” is the issue that Christians get riled up about. If World Vision had said, hey, you know? We’re not going to comment on the sex lives of our employees, period . . . I just really doubt World Vision would be getting “Rob Belled” right now. People would probably not care, because there are plenty of Christian organizations that don’t require every employee to sign behavioral contracts. Call me cynical but I really suspect this is more about the idea of gay employees than it is about issues of purity amongst World Vision employees.

More than the frustrating subtle homophobia, though, is the fact that people are willing to make starving children the victims of a socio-religious debate.

This is so sad to me. We’ve sponsored children through World Vision for over 10 years, and anyone who sponsors a child knows that World Vision creates a very personable relationship between the sponsor and the child.

We currently sponsored Santiague, who is 15 and lives in Haiti, and Dalvin, who is 7 and lives in Uganda. Santiague lives with his parents, 3 brothers, and 2 sisters. His parents struggle to provide for the family. His mother and father are farm laborers but they are  not able to meet their family’s needs. With our help, Santiague is in school, and his community is provided with seeds and training on new farming methods. Dalvin lives in a community gravely affected by the HIV/AIDS epidemic and has lost his parents. He lives with his sister and grandmother. Our sponsorship helps meet his basic needs, and also provides healthcare improvement for the entire community. Theses are the referral pictures we got when we first signed up with World Vision: 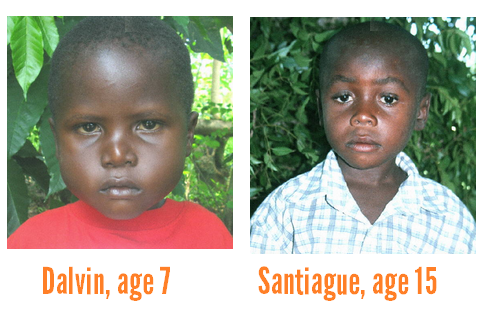 It has been a blessing to get updates over the years and watch them thrive.

It is unfathomable to me that people would choose to punish and drop the child they sponsor over a difference in doctrine . . . or in this case, an organization’s decision to allow for differences. I visited the World Vision facebook page and was so incensed by the number of people announcing their dropped support of sponsored kids. As my friend Nish said on twitter:

Is access to food, water, and education trumped by keeping gay people out of a job at a nonprofit? If we want to serve people, we should not make distinctions about who we serve, and we should not deny those we serve out of disunity or division. It’s astounding to me that Christians would take food from starving children because a gay person might have helped in getting it there.

I’m concerned that children who are served by World Vision will suffer, and I’d hate to see that happen. I’m also concerned that the exhiling of Word Vision from certain Christian circles will further erode the divide of believers who are at odds on the issue of same-sex marriage, when their entire purpose was to avoid the division inherent in this issue. Are we really ready to excommunicate one another on this issue? I’m so tired of Christians trying to remove a seat from the table from people who have different views on this.

I am thankful this does not represent all of us. I would love to see people concerned about this pick up the slack of Christians who are dropping their children over this.

I’ve decided today to sponsor another child. I’d love to see 100 more kids sponsored today. Will you consider it? 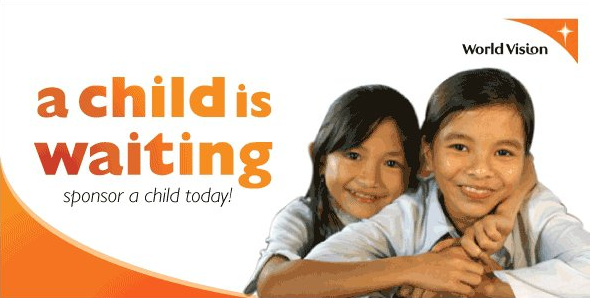 NOTE: Let’s not have the comment section devolve into a debate on the scriptures about homosexuality. We’ve heard them. We know them. We’ve all got difference opinions of how they apply. There are plenty of places online to have that debate, but I believe it’s a derail to this discussion. World Vision did NOT take a moral or scriptural stance on this issue, but rather stated that they are “deferring to the authority of churches and denominations on theological issues.”  So let’s talk about World Visions decision, it’s implications, and our feelings about it, but avoid the “is it a sin or isn’t it” debate. World Vision has chosen to side-step that question, reminding us that they are a global aid organization, not a theological gatekeeper.