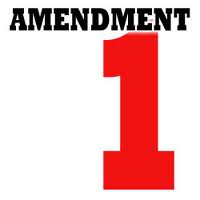 As soon as my husband accepted our friends’ offer of an “Another Family Against the Amendment” yard sign in January, I knew exactly how it would play out.  The corrugated plastic sign wouldn’t be forgotten in somebody’s car trunk until after the May 8 North Carolina election, the way it would if I was responsible for doling anything out.  It wouldn’t be hidden by shrubbery so that no one ever had to see it in front of my house.  No, it would be—and was—stabbed right in the middle of our tiny yard just as our socially and politically diverse cadre of acquaintances paraded into our home for my groom’s stupid Super Bowl party.

When I say diverse, I mean political-advisor-to-G.W.Bush and local-GLBT-activist diverse.

Those opposed to the proposed legislation to our state constitution refer to it as the “Anti-Gay” amendment and supporters call it “Marriage Protection” amendment.  For non-North-Carolinians, proposed Constitutional Amendment 1 affirms that “marriage between one man and one woman is the only domestic legal union that shall be valid or recognized in this State.”  It is about marriage, but it’s about a lot more than marriage.  In fact, the affirmation is already in NC law, but to further codify it into the Constitution would have other far-reaching implications.  Reflecting the larger cultural conversation, most supporters of the legislation are people of faith.  However, many of those opposing the amendment’s passage are also people of faith.

I am one of them.

Admittedly, many of the reasons I hope for the amendment’s defeat have nothing to do with my faith. The provision, which will limit current protections for same-sex and opposite-sex unmarried couples, does not belong in the Constitution of any democracy.  It hinders the economy of our state, dissuading employers from locating here by limiting their ability to attract the talented professionals who won’t want to live in a state which is, though Amendment supporters would want to deny it, anti-gay.  It compromises protection of the vulnerable—children, single folks—that are currently in place. For instance, when a company currently extending domestic benefits to unmarried partners decides it no longer cares to do so, the proposed Amendment could be used as legal justification.  This directly threatens the security of families that I love.  And God loves.

If it wasn’t obvious from my anxious Super Bowl palpitations, please know that I am a card-carrying heterosexual Evangelical.  So I understand that many of my crew, most with hearts in the right places, view this legislation differently than I do.  Yet even though many Evangelicals don’t want to “bless” families with two mothers or with two fathers or with opposite-sex partners cohabitating—and are exercising the rights within our faith communities not to do so—these families, beloved by God, still exist.  Their children still need medical coverage.  Their partners deserve security.  Individuals in violent relationships, both opposite-sex and same-sex, need protection.  Whether or not we agree with their choices, we are still obligated by our faith to protect their health and well-being.

Protection of the vulnerable, as it’s expressed in the Old Testament law, is a fundamental biblical value. Again and again in Deuteronomy, God commands his people to include, protect, provide for orphans, widows and aliens.

In the Scriptures, the God of Israel is the God who cares for vulnerable children, namely ones who don’t experience the social and financial protection of living in a home with a heterosexual mother and a father.

In the Scriptures, the God of Israel is the God who cares for women who don’t experience the social and financial privileges of being married to a man.

In the Scriptures, the God of Israel is the God who cares for aliens—foreigners who worship other gods!—who live among his people.

That last one is extra-important: biblically, the protections and provisions of God’s law, and ideally the protections of state law, are not reserved only for those who share our convictions. Whether we like it or not, they’re for all.

Deuteronomy 10:18-19 confirms, “He executes justice for the orphan and the widow, and shows His love for the alien by giving him food and clothing. So show your love for the alien, for you were aliens in the land of Egypt.” To be clear, this isn’t about a kind of Free-To-Be-You-And-Me hippy love.  Again and again the poetic rhythm of God’s law-giving follows this pattern: exercise love and protection and provision for the marginalized because this is how God loved you when you were oppressed in Egypt.  God’s people are expected to practice this radically just hospitality, for those who do and do not share our values, because we have experienced God’s graciousness to us.

The Almighty, who admittedly frowned on inter-faith marriage, could just as easily have commanded, “Remain pure by legislating against the aliens among you so that, failing to flourish, they are pushed outside of your boundaries.”  Recently, in a letter to the editor of one of our North Carolina papers, one hostile Christian offered this very solution: “Suggestion: Why not relocate to a state more to your liking?”  Though the possibility is no doubt pleasing to some, the suggestion is an ungodly one, illustrating what Miroslav Volf, in his award-winning Exclusion and Embrace, has identified as the sin of exclusion which “often passes as virtue, especially in Religious circles.” (p. 72)  [Please read this wonderfully nourishing book, as I’m unable to do it justice here!]

In fact, this is what will happen in North Carolina if Amendment 1 passes.  Gifted and beloved individuals and families will not accept positions here and some of those currently here will, eventually, trickle out of the state, leaving grandparents and aunts and uncles and cousins. So it’s important for moderate and conservative Christians to recognize that, even though we do not live in a theocracy, what God actually commands—radical hospitality, welcome into God’s family—is the diametric opposite of the proposed legislation.

As a person of faith, I am convinced that the vote on NC Amendment 1 is a holy opportunity for those of us who already enjoy social privileges and protections to say to those who do not believe, and to the GLBT community, and to the less-organized community of opposite-sex co-habitators, “Though our social and political convictions may differ, God is, and we are, fundamentally for you.” I have to believe that this honey-drenched gospel of good news will touch more of these hearts than the other vinegar-soaked variety.

Regardless, when a state extends protection and provision to the most vulnerable, God’s will is done on earth as it is in heaven.

Come join: FAITH IN ACTION: GET OUT THE VOTE!

A faith-based rally featuring Jay Bakker, David LaMotte, Ginger Brasher-Cunningham and other community leaders. After the rally we march to the polls and cast a ballot.

After party at Fullsteam Brewery (beginning around 3:00).

VOTE AGAINST AMENDMENT ONE

—-
Margot Starbuck is a speaker, volunteer and author of The Girl in the Orange Dress: Searching for a Father Who Does Not Fail. Her new book, Small Things With Great Love: Adventures in Loving Your Neighbor, with a foreword by Tony Campolo, was released in January!