Armed with the power of social media, some young North American activists set out this week to take on one of the most violent rebels in the Great Lakes Region of Africa–Joseph Kony. They’ve called their campaign phonics download

com/” target=”_blank”>KONY 2012, and they’re determined to get rid of Kony and bring the children he’s abducted home by the end of this year.

I commend these folks for their insistence that the church stand against injustice. And, at the same time, I join those who ask: is nonviolence not an option?

Is it possible to respond to Kony with the power of Jesus’ nonviolent love? 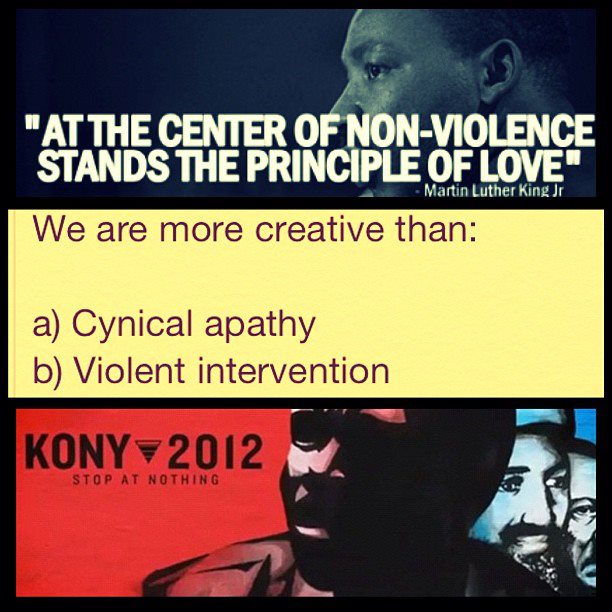 Thanks to Jarrod Saul McKenna for this image

For me, this is not a speculative question. I know the answer is “yes” because I have met her. Her name is Angelina Atyam. (For a rich theological account of Atyam’s witness, see my friend Emmanuel Katongole’s new book, The Sacrifice of Africa.)

In northern Uganda, 139 children were abducted from their local school by the Lord’s Resistance Army in 1996. Among them was the 14-year old daughter of Angelina Atyam, a local midwife and nurse. Atyam knew she would never see her daughter again. Thousands of parents before her had bitterly resigned themselves to a brutal reality that could not be changed. She had every reason to be angry, but little room to hope that anything could change.

Still, Atyam could not remain silent. This was her daughter, after all, abducted and abused along with other young women whom she had helped welcome into the world. She knew she had to do something. Her sense of urgency was every bit as strong as that of the KONY 2012 Campaign. But her approach was different.

Atyam founded the Concerned Parents Association, seeking the release of the children while at the same time advocating a different approach to their captors. “Our message is unconditional forgiveness and reconciliation, ” she said. “We have absolutely forgiven them. We can turn to a fresh page; we do it for the sake of the children who are alive.” She continued, “I have waited more than three years; some parents even longer. We are tired of war and our children need a better life. Of revenge I would say that we cannot throw petrol on a burning fire; otherwise we would be like them. We can say this because we have been at the center of the pain.”

Atyam was relentless in her love, speaking out against Kony on radio and in print. When he sent threats, she did not waver. Finally, he sent a message to say that he would release her daughter if she would stop her campaign against him. “They are all my children, ” she said. “I will not stop until they are all released.”

Eventually, they were. But the power of Atyam’s story is not in the conclusion that “it worked.” It’s in a faith that knew love was possible, even when evil seemed overwhelming. When I met Atyam several years ago, I asked her how she knew to hold on. “I got down on my knees every night and said the Lord’s Prayer, ” she told me. “‘…forgive us our trespasses as we forgive those who trespass against us…’ I knew I had to keep praying.”