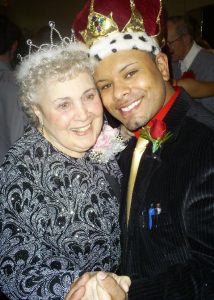 I have a friend who’s one of the great speakers of our time.  His name is Guy Dowd.  Several years back he was awarded the honor, by the President of the United States, as “Teacher of the Year.”  That’s really an amazing accomplishment given how many tens of thousands of teachers are in the school systems of America.

Guy tells of the time when he talked to some of the students in his school in Wisconsin and said, “Instead of a regular senior prom, let’s have a ‘real’ senior prom.”  He explained to these kids that he meant it would be a good idea to have a dance for seniors.  He wanted them to invite elderly people, especially those who were in the county home and in other retirement centers, to come to the school on a given night and the students would put on a dance for them.

The students took up the idea and did exactly what was suggested.  The night of the prom for seniors (real seniors), little old ladies started showing up at the school gym at about 6:00 PM, even though the dance wasn’t supposed to start until 7:00.  Some of them were saying with shaky voices, “We hear there’s going to be a dance here for us tonight.”  By 6:15, it was obvious that they were going to be overwhelmed with old ladies and not enough old men to dance with them.  Guy said, “We commandeered the football team, told them to shower and get in there and dance with the old ladies.  We got the guys in the senior class to come and dance, too.”

The dance was a joyful experience and, in the fullest sense, a “real ball.”  “At 11:30, ” Guy said, “I had to announce over the PA system, ‘It’s late.  It’s 11:30.  You people should go home.’  They did, even though they didn’t want to.  These old men and ladies who were dancing and dancing for so many hours were having the time of their lives.

The next day, the students came to Guy and said, “Mr. Dowd, we’ve got to do that again. That was more fun than anything we have ever done here at the high school over the years we have been here.”  And so they did.  Wouldn’t it be a great idea if you got high school kids that you know to do the same thing?  Maybe a church youth group could do it, maybe a school could imitate Guy Dowd’s students.  But whatever the case, wouldn’t it be great if you and your community ran a real senior prom?