So I’ll admit this article first took seed in my mind due to the entertaining visual of the title. However, I believe the potent philosophy of Ayn Rand has taken hold within Christian thought in such a way that it now deserves some scrutiny. For those of you who may not know, Ayn Rand is the philosophical champion of modern “laissez-faire capitalism” and free-market conservatism. For those of you who already know she is, you have probably come to love her as a modern prophet or hate her as a cult leader.

For those of you who love Ayn Rand, and those of you who have to deal with people who love Ayn Rand, you will notice that despite having no religious affinity many Christians have embraced Ayn Rand’s work as a kind of “second Bible.” The Tea Party and other radical conservatives are more likely to quote Atlas Shrugged, than the Gospel of John. So how does the philosophy of Ayn Rand really stack up against the teachings of Jesus Christ? Should Christians really be using Ayn Rand as a pillar of righteous social and economic thinking?

DISCLAIMER: THIS IS NOT COMPARING AYN RAND TO JESUS CHRIST IN RELIGION. THIS IS A COMPARISON ON SOCIAL AND ECONOMIC PHILOSOPHY. Comparing Ayn Rand to Jesus from the perspective of a Messiah or Savior would, of course, be ridiculous. This is a look at who is better at providing us a philosophical foundation for social and economic policy. In other words, when we leave the pew who is the best to guide us on national policy?

First, let me say that I have a personal love for Ayn Rand’s work and her contribution to modern thought. Atlas Shrugged was not only one of the first philosophical works I read, but also carried an impressive heft for throwing at my brother. I ask all her fans to give me some grace as I now summarize her volumes of work into a few paragraphs. Ayn Rand’s worldview and philosophy is built upon two main pillars: 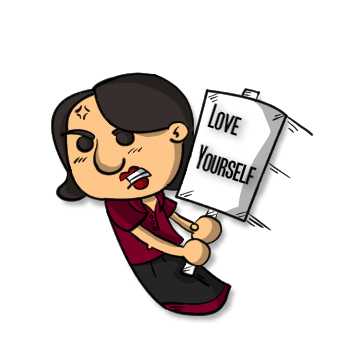 “I swear, by my life and my love of it, that I will never live for the sake of another man, nor ask another man to live for mine.” -Ayn Rand

While many people reduce Ayn Rand’s view of Egoism to pure selfishness, I believe the above two quotes better represent her view. Ayn Rand believed in our individuality, and the creative inspiration which comes from it. She viewed the challenges of this life as the fire which tempers our characters and challenges us to build and create. Her greatest fear was that society would grow to take away the motivation from the individual to grow or, worse, suppress it.

Related: Why Christians Shouldn’t be Offended by So-Called “Socialism” – by Morgan Guyton

It is not accurate to think Ayn Rand was touting hedonism (love of pleasure), instead she believed our most pure and natural state was to create. That man, if left alone and uninhibited, would not spend his days gorging himself, but challenging himself to build, invent, and produce. Ayn Rand saw the best of mankind, as an educated, inspired, mature, and capable being. Her ultimate belief was that society benefits from the individual, not the individual from society.

“If any civilization is to survive, it is the morality of altruism that men have to reject.” – Ayn Rand

“Government “help” to business is just as disastrous as government persecution… the only way a government can be of service to national prosperity is by keeping its hands off.” – Ayn Rand

The thing which Ayn Rand hated the most was government or society placing moral or conditional constraints on the individual for “the good of society.” Her belief in Objectivism declares that society cannot really know what is “good for it” and therefore any attempt to control individuals for an altruistic purpose is foolishness at best and tyranny concealed in righteous at worse.

The only hope for progress, according to Ayn Rand, is to leave individuals alone. She believes that individuals of character will thrive and succeed, and fools will suffer. Society should not blame one man for the suffering of another or credit the success of one person to another. It is a paradoxical belief that society improves as a positive consequence of individual pursuits. 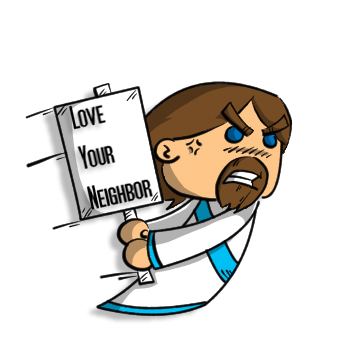 I feel this contestant needs no introduction, but let’s take a moment anyway. The greatest problem with trying to summarize Jesus’s views on society is that no one agrees on them. We tend to agree on what Jesus said, but not what he meant when he said it. So for the sake of getting this fight started, we are going to focus on the words of Jesus Christ which seem to conflict the most with the philosophy of Ayn Rand.

The Need for Love and Compassion

“Give to the one who begs from you, and do not refuse the one who would borrow from you.” – Mat 5:42

“But a Samaritan, as he journeyed, came to where he was, and when he saw him, he had compassion.” Luke 10:33

Jesus not only teaches us a life of charity towards others, but also sets himself up as an example. During the time we follow Jesus in Scripture, Jesus is dedicating himself solely to the teaching and benefit of his disciples, his followers, his audiences, and ultimately mankind itself. Living a life of altruism, even unto death, makes it difficult to declare any conditional limits to his teachings.

“When Jesus heard this, he said to him, ‘One thing you still lack. Sell all that you have and distribute to the poor, and you will have treasure in heaven; and come, follow me.‘” – Luke 18:22

“No one can serve two masters, for either he will hate the one and love the other, or he will be devoted to the one and despise the other. You cannot serve God and money.” – Matt. 6:24

Jesus strongly rebukes against the pursuit of money or possessions. The direction for the individual is to set, in their heart, the pursuit of following Christ above all else. More importantly, we are directed at where our passions should be. Jesus is pointing out that what we love, what we find important, and what we have an emotional passion for will ultimately guide our actions. If our love and passion is for wealth, our actions will be negative or destruction. If our love and passion is for God, Christ, or each other our actions will be positive or constructive.

Is the pursuit of selfish interest better for society than charity or compassion?

I think it is important to point out that Jesus made no direct claim that what he was asking us to do was better for society. In fact, the positive consequences of Christ’s teachings are admittedly not fully provided in this life at all but “in heaven.” So why would Jesus ask us to do something that Ayn Rand is claiming harms society?

The first clue is that Jesus rejects both public altruism, and the idea that blind charity is “always right.” He asks us to do acts of charity in private (Matt. 6:3-5), and chastised Judas for his sanctimonious “give to the poor” comment regarding perfume (John 12:5-8). Jesus’s instructions for charity and compassion are given to the individual, not the society. In other words, the call of charity is the burden of the individual to make by choice, not coercion.

Ayn Rand’s teachings are also complex, and can appear self-contradicting. She claims the individual should pursue self-interest, but then goes onto claim that virtue, discipline, integrity, and productivity is the best way to pursue self-interest. Productivity benefits us all, so selfishness is altruistic. Ultimately Ayn Rand would insist that a person acting in the best interest of himself is also acting in the best interest of everyone… so we are left with a kind of strange “semantics draw.” Jesus teaches charity, Ayn Rand teaches a kind of enlightened selfishness, and the resulting actions are almost the same.

Ayn Rand wishes individuals to not be burdened or restricted by the society around them. Yet, she is very harsh to criminal elements, saying “Pity for the guilty is treason to the innocent.” The problem with extreme dogma, with little room for grey, is that they always breakdown. Society has to come together to deal with crime, and law of any kind is a restriction society places on the individual. Therefore, no matter what the individual will always have restrictions for the sake of society.

Then we must ask, can we say that law should only restrict behavior which harms others? This is impossible. I may not hurt you physically, but I may consume too much food, leaving none for you. I may take too many resources, without concern your needs, leaving you desperate. Electrical systems, water, trash, roads, and parks are all institutions which exist because society places restrictions upon itself to share resources. If each person was to try to provide for themselves alone, we would not survive.

If not following the teachings of Jesus, at least to some level, by considering the needs of our neighbor as important as our own, society would not be possible. We have learned how freedom of the individual is important, but also why social cooperation is important.

Is one individual responsible for another?

Let’s say we create a perfect system, which many think capitalism is, where society operates together in harmony but the individual is free to participate or not. Can we then say that one individual should not burden themselves with the behavior of another? Can we sit back and believe that everyone’s condition in life is based on their own character or work ethic?

The answer is yes… but only if we were all born at forty-five years of age, fully educated, emotionally mature, completely healthy and didn’t have children. That is not our reality, nor will it ever be. We are interdependent organisms who rely on each other. While we all have responsibility for “you get out what you put in” we also have responsibility to care for, educate, and assist each other when circumstances find us helpless.

Ayn Rand’s confidence in humanity is something I love. I love how she paints a picture of how humanity can operate without sacrifice, and our individual pursuits benefit us all. However, this vision of humanity is not our present reality. Not everyone has the same level of education, development, health or opportunity. Ignoring these inequities is just as harmful as direct violence.

Ayn Rand’s philosophy is better suited for healthy and capable people to work together in small teams or companies. Her wisdom is great for developing strong and equally beneficial partnerships and relationships. Ultimately, I believe Scriptures and Ayn Rand agree the most when Paul warns us against being “unequally yoked” in our relationships (2 Cor. 6:14). However, beyond two healthy people in a relationship, Ayn Rand’s philosophy breaks down.

Ayn Rand is a brilliant thinker who has a lot of wisdom about modern economics and the potential of capitalism. However, thinking that Ayn Rand’s view of civilization is possible without charity and compassion is simply not reasonable. While Jesus never really defended love from an economic perspective, we can clearly see that compassion moves society forward.

—
Yaholo Hoyt is a practical mystic, a passionate writer, a paltry poet, and an old-school Jesus freak. You can find him at http://yaholo.net or read his blog at http://practicalchristianmysticism.blogspot.com