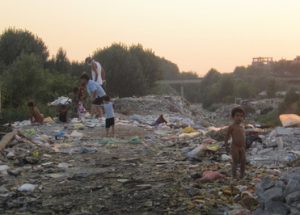 In 2008 I had the opportunity to serve the poorest of poor. There is a people group in Honduras known as, “the people of the dump” who literally live, eat, work, and sleep in the city trash dump. Inside this trash dump there exists disease, human excrement, germs; where people can be found working near mangy dogs, cows, and vultures. The smell is nauseating and the flies are numerous. Many people have called it, “Hell on earth”.

Here in Albania there exists something similar. Although the Roma don’t live in a city trash dump, they live right on the banks of a river that acts as a city trash dump. People from all around come here to eliminate their trash in this small neighborhood that seems hidden from the rest of society. Like Honduras, disease, feces, and germs exist here. Mangy dogs can be seen fighting over half-eaten food. Adults and kids often rummage through this trash seeing what they can round up for themselves. In fact, their houses are made from scrap material. I can’t imagine waking up everyday to this life. It’s no wonder many of the Roma revert to alcohol and drugs… draining out their depression and hopelessness. They often ask, “Where is God in all of this? He’s not here.” Hell on earth.

Jesus often spoke about hell throughout the Gospels. We get the English word “hell” from the Greek “Gehenna”. And, Gehenna means “Valley of Hinnom” (Nehemiah 11:30). During Jesus’ time, this was a literal place existing on the outskirts of the city of Jerusalem. It is believed this place acted as the city trash dump and was also the place that many pagans sacrificed children to their gods (2 Chronicles 33:6). Here, there was “gnashing of teeth” often associated with dogs fighting for scraps. Fires were used to burn corpses and other waste. Jesus’ audience included 1st century Jews, and they knew of this place that He often spoke of. They associated it with a place nobody dare venture into. It was for all intents and purposes… Hell on earth. 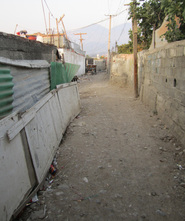 I don’t want to get into some theological discussion about hell. There is enough of that already going on. But, what I do want to focus on is the hell that many people are already living here on earth right now. It’s hard to imagine places like this actually exist. Especially during this 21st-century we live in, with the numerous technological advances and modern comforts we have. We have the ability to tap into resources we’ve never had before. We have the ability to end poverty, hunger, and disease. And although there are a great many organizations and ministries already doing this, there is not enough. Nearly 2, 000 years ago Jesus spoke about the kingdom of God more than any other topic. And, I believe Jesus equipped us with the ability to bring the kingdom of God to people who are living in hell on earth… now. He charged us with caring for “the least of these”. As I gaze upon the Roma neighborhood and see a lone naked child rummaging through the trash, I am overwhelmed with raw emotion.  I ask myself “Why?!”. Why, does this dear child deserve this? I don’t have an answer. But, I know that the only way this child will be helped is by God calling out more people from the comforts of their own lives and bringing them here to work. Bringing the kingdom of God to these people. Letting the light of Jesus Christ pierce the darkness they now live in.

Please, will you prayerfully consider joining in this work?  Consider this a plea. We don’t need money… yet. We need people. We need you. We need people who believe in the words of Christ to care for the poor, the widow, and orphans. The message of love, grace, and compassion. The message of hope that cannot be found in programs, organizations, or strategies, but only in Jesus Christ. We need people willing to jump into the trenches, get their hands dirty, and help lift up the very people that Jesus is drawn to. Mother Teresa once said, “First we meditate on Jesus, and then we go out and look for him in disguise amongst the poor.” We see Jesus everyday in the Roma begging in the streets of Tirane. We see Jesus in the naked Roma boy digging through the trash heap. We see Jesus in the drunk Roma man wallowing in his sorrows on the side of the alley. And, we see Jesus in the helpless Roma woman who is beaten by her husband. Will you come see Jesus with us?

“The King will reply, ‘Truly I tell you, whatever you did for one of the least of these brothers and sisters of mine, you did for me.”  (Matthew 25:40)

—-
Greg Dill, along with his wife and three kids are missionaries serving amongst the Roma (Gypsies) in the country of Albania. Their mission is twofold: to introduce the Good News of Jesus Christ and to help move them from abject poverty into productive and self-sustainable lifestyles through education and the development of simple business skills. Their ministry website is www.fivedills.com.