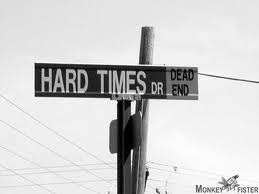 Every industry is getting hammered by the recession, but small nonprofits are getting hit especially hard. I’ve been working mostly by contract for nonprofits for the last eight years, and in three months last year, I lost all of the work I had built up in short succession.

Everyone said that it was no reflection on my work, but the result was always blunt and humiliating. One nonprofit director met me in a local parking lot, handed my check over and let me know that it would be my last.

He did give me a swell chrome lunchbox, though, so I’ve got that going for me.

I make a practice of keeping my personal identity and value separate from my work, but it’s nearly impossible not to feel devalued when so much bed news comes so quickly. My first night of being unemployed, I spent hours poring over job search sites, emailing friends and colleagues seeking leads, manipulating our household budget and occupying myself with anything I could to keep from worrying obsessively.

By the next day the condolences started rolling in. One after another, people asked how and why this happened, and I would oblige with a superficial “times are hard, things happen” kind of response. A few folks referred me to leads for work, and a fellow author from my publisher hooked me up with a couple of proofreading and editing jobs.

We bought a car from a family member who quickly forgave payments until we could pick them back up again. My wife’s mom offered to help cover babysitting costs so Amy could focus on her job and I could freelance and keep scouting new prospects. I tightened where I could in our budget and came up with a reasonable plan to help get us to the end of the year.

Then it hit me: we can only fall so far.

We’re not talking about how to keep the collection agencies out of our checking account, or what to do if the bank forecloses on our house. We’re not concerned about where our next meal will come from or if the lights will stay on. The biggest challenges I’ve faced so far involve the humbling experience of asking for help, forgoing some relatively minor conveniences and trying to figure out what to do next. But no matter what happens, we’re not going to end up on the street.

I teach diversity workshops from time to time, and one example I like to give about inherent privilege is to ask the left-handed people in the class to share with the rest of the group all of the things they come across on a daily basis that are made for righties. It’s a benign but poignant illustration that helps get the conversation about privilege started.

There are always those who contend that the United States is the land of equal opportunity, and that those living in poverty have the same chance to make something of themselves as the rest of us. But I’ve worked in schools where children fought to stay awake because their mother’s boyfriend kept hitting their mom the night before. I’ve had kids too distracted by hunger to focus in class because no one in their house had gone to the store. Not only do these children have very little; they know few, if any, people who live otherwise, and so to them, poverty is inevitable.

As a follower of Jesus, I try to consider what he would say in a situation like mine. It’s interesting to me that he had different responses for different people, depending on the circumstances when it came to privilege, money and the like. For some, he suggested that paying their taxes and giving a fair share to God was sufficient. When Zacchaeus offered to give half of his wealth away, Jesus seemed good with that. For the rich young man who wanted to know the secret to entering God’s kingdom, he was shocked by Jesus’ suggestion to give away everything he had.

There are people of both wealth and power in the Bible that seems to be held up as examples. Jesus himself benefitted from the generosity of benefactors. The more I reflect, the more it seems like the core message Jesus had for everyone was: let go and use what you have for the betterment of others. Now I understand that wealth and privilege are not synonymous, but Christ’s doesn’t condemn those with power, abundance and privilege; he does, however, call them to account when they don’t use everything in the power to uplift their brothers and sisters.

For me, the unexpected change in employment has done several things. First, it is a concrete reminder of the tenuousness of what we depend on as “normal life.” It’s also helped us re-prioritize what we need, compared to what we want. More important, it’s made me realize how fortunate I really am, job or no job.

It’s funny, but somehow having less in those moments made me more grateful for what I did have: something I was much more likely to take for granted while things were going more smoothly. It makes me wonder what kind of wealth that rich young man who walked away from Jesus would have discovered, right there in front of him, had he been able to walk away from what he thought was more important.

Things may get harder before getting easier, but I know we’ll be all right. Between my education, our families who have the means to help us out and my broad network of friends and acquaintances, it’s possible for us to imagine things actually working out better than before, looking back months from now on this as an opportunity for growth and positive change.

Such optimism is not a universal experience. I don’t deserve this hopefulness more than anyone else. But with such opportunity, there is responsibility.