Renowned scientist and author of such books as A Brief History of Time Stephen Hawking suggested recently that it is conceivable in the future that we may be able to upload the contents of the human brain onto a computer so that the information may, in a sense, become immortalized. He readily conceded, however, that such a task was well beyond our current technological capacity, and he offered some measured words of caution for those who sought to read too much into this potential.

When asked if this meant that there was potential for the mind to live forever through an alternative medium, he was dismissive. Such talk of human immortality, he said (and in particular, the very notion of heaven),  was the stuff of fairy tales for people “afraid of the dark.”

Then in the same week,  TIME Magazine featured a story about Google on its cover, highlighting a new company it has recently launched called Calico. The new enterprise is perhaps the most ambitious of what Google commonly calls their “moonshot” projects, as its aim is to prolong the human lifespan potential, and perhaps eventually solve the “problem” of death.

All of this was particularly interesting to me in the context of the conversation between Richard Dawkins and Jon Stewart on a recent episode of “The Daily Show” about whether science or religion was more responsible for hastening humanities apparent self-destruction.

As I finished the article about the Google project I was both exhilarated and deeply disturbed. I will admit that the prospect of my own indelibly – or at least significantly prolonging my limited time on the planet – holds a great deal of attraction. But then I began to imagine what the Earth would look like if few of us ever vacated our current spot at the table to make room for new people. Would we agree as a planet to stop having children? Would extreme living circumstances render us sterile? Would we instinctively thin ourselves out through war, or would nature hasten the process through drought, famine and increasingly violent natural disasters?

Clearly such pursuits for the sake of themselves, while admirable and certainly understandable, are at the same time necessarily blind both to the profound negative impact and ultimate futility of their lofty goals. So although there is great monetary potential in the work of Calico, and although in the short term the benefits to any particular individual would seem noble, one has to wonder if all of the time, money and energy spent on such efforts are actually the best use of our inevitably limited time.

And although great thinkers like Hawking may shrug their shoulders when confronted with the problem of mortality, they also tend to demonstrate an equal degree of indifference with regard to the moral implications of such scientific ambition. 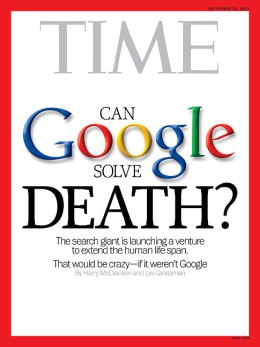 Truth be told, religion is not really any better at dealing with death than science. If we take an honest look at our songs, our sermons and the attention we give to our thoughts on, and hopes for, the afterlife, it is abundantly clear that much of religion’s focus is on the pursuit of immortality as well, if perhaps in a more esoteric or existential form then science would be satisfied with. Too often, we gazed beyond the difficult subjects of death and dying within our faith communities, leaving breathlessly instead to what lies beyond.

The prominent voices within our faith communities are left with a twofold responsibility. First, we should be about the business of helping people live more fully into the lives we know for sure that they have, here and now. As for what lies beyond that, we are well served to heed the words of Jesus, when he says that we do not know the day or the hour when everything will change, and frankly, it’s none of our concern.

Second, as stewards and arbiters of the rituals that mark the significant transitions in our lives, religious leaders have to come to terms both with their own mortality and with the opportunity to help others do the same. We cannot and should not dismiss the issue of death by citing comforting scriptures or singing familiar songs. Though these may temporarily ease the sting, when people need is to learn how to accept, to surrender, to say goodbye.