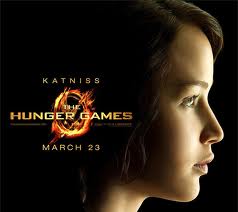 75 years after the end of the world, reluctant teenage heroine Katniss Everdeen brings it to an end yet again.

Welcome to The Hunger Games, a trilogy dripping with the weight of oppression and the dread of liberation! Suzanne Collins has woven a fascinating tale for young and old alike that unpacks the complexity and devastation of war. She’s also given us a story for our times: the liberation of a people brutally oppressed by a privileged minority. Ultraviolent throughout, Collins books are not on the surface pacifist. But this peace advocate absolutely loved the books and recommends you read them. Why? Because it’s an honest look at the roots and limits of violence. Her  indictment of violence by portraying violence is an enormous gift.

THE GENESIS OF VIOLENCE

Let’s start where Collins does, by passing judgement on violence’s defensive or protectionary function. Like all good fiction, she doesn’t tell you she’s indicting violence, she invites you to feel the indictment through outrage, hate, betrayal, fear, despair, and manipulation. Your blood will boil along with every young adult reader as she unmasks Dominant Violence: violence used by dominant culture to protect itself. Set in the future of a post-American country called Panem, the Capitol city wields absolute control over twelve outlying Districts they violently subdue. In the name of Security, Panem demands the annual sacrifice from each district of two innocent “tributes” who fight to the death in a survivor-like game called “The Hunger Games.” These teenage scapegoats pacify the districts (through fear) and leave the capital population feeling righteous, superior, and safe. Dominant violence – whether in daily life or the artificial setting of the Games – is justified because it offers protection.

Collins says absolutely nothing positive about this form or function of Dominant Violence. The disconnect between the lavishness of life in the capital and the grotesqueness of death in the arena underscores how far we’re willing to go to ignore the consequences of injustice in our world. Shirley Jackson, the author of a similar 1948 story called The Lottery, said she wrote to ”shock the story’s readers with a graphic dramatization of the pointless violence and general inhumanity in their own lives.” Collins does the same. Reminding us security must not trump justice, and that no amount of distance protects us from complicity.

When the security function morphs into oppression a new form of violence is born: Resistant or Revolutionary Violence. This secondary violence is always, as theologian John Dear says, a response to Dominant Culture. Exploring liberation theology he says,  ”It starts with the inhuman experience of poverty, the institutionalized violence of misery which kills millions of people around the planet. It declares that the violence of poverty is not the will of God, that God wants every human being to have life to the full, not to die in misery. Liberation theology declares that God is actively involved in the struggles of the poor, to end the violence of poverty around the world.”

It’s possible to read the trilogy as a full-on support of Resistant Violence, given how well she differentiates between Dominant and Resistant Violence. She clearly flips the script on which of the two is morally suspect. In my context (Instigators of Dominant Violence and sometime victims of Resistance Violence) and as a pacifist, this was terribly meaningful. When dominant cultures manipulate and disenfranchise minority communities, liberating movements have erupted throughout history. As one white woman learned after intentionally moving into the margins of Oakland,

It is at least slightly easier, now, for me to identify with people who are disenfranchised [in multiple ways]—by race, poverty, social class, lack of access to education, constant threat of violence and humiliation, and more—and who suffer the worst effects of a violent and exploitative network of social and economic systems. I see the police brutality. I see the impossibility of navigating through even those social safety net programs that exist. I see the near futility of trying to thrive under these circumstances.

This is the story of the civil rights movement in the American South, with it’s tension between choosing violence or non-violence as the best response to white oppressive supremacy. As Martin Luther King Jr said,   ”Riots grow out of intolerable conditions. Violent revolts are generated by revolting conditions.” Peeta’s Bread ( a gift of charity) is Not Enough to overcome such revolting conditions.

Collins helps you feel the conundrum of Resistant Violence as the grinding toll of injustice on selfhood and community. In the face of overwhelming might, horrifying genetic manipulation, and lack of a future, violence finds a foothold. She humanizes minority, gang, and Third World violence by allowing us to feel the hope of freedom in the districts. Writing from the margins rather than from the center, she mirrors the Biblical story without conjuring its religion. Dear says, “From Exodus to Isaiah, from the Gospel of Matthew to the Book of Revelation, we read about a God who takes sides with the poor in their struggle for liberation.”

THE LIMITS OF VIOLENCE

Over and again The Hunger Games conjures hope through one of the core tools of resistance movements: Symbol. Indeed, not just for plot turns, but in power, Collins’ use of symbol overshadows the usefulness of violence. We see it everywhere:  subverting imperial manipulation by eating berries a la Romeo and Juliet,  decorating Rue’s dead body and giving her the District 12 salute (along with District 7′s response in kind),  bread from District 7, Katniss’ fiery dresses, the effigy of Seneca Crane, and of course the Mockingjay. 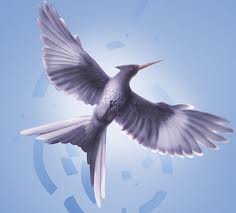 The Mockingjay: Symbol of a Revolution

The power of symbol stands in contrast to the limits of violence in the story. A key scene from Catching Fire is Katniss’ and Peeta’s visit to District 7 where minority symbol and dominant violence are in tension, sparking revolution. Notice how symbol creates and spreads energy, whereas violence subdues it. It’s also worth noting the extreme limits of violence, proven by the vibrant presence of a revolution in the face of overwhelming force!

Never does the author hail a military victory,  and battles themselves are either glossed over or mentioned in fast form. Instead, what we get is the slow, painful unmasking of the games themselves, the awful effects of violence, and of the conditions in the districts. The widespread dissemination of that information becomes the key to revolution at a much higher level than violence. Change hinges on acceptance of reality from those with and without power.

THE EFFECTS OF VIOLENCE

But no where does The Hunger Games indict violence more thoroughly than in unmasking the effects it has on both victim and perpetrator. Collins addresses this at both the corporate and individual level. Corporately, you have poverty and a welfare mentality on one hand, and extreme excess and disconnection on the other. Personally, the effect on perpetrators is to leave us soul-less and business-like, such as “The Careers” and President Coin (and the hundreds of Christians in Germany who “just followed orders”).

The portrayal of descent into severe Post-Traumatic Stress Disorder (PTSD) is nothing short of brilliant. Peeta clinging to the back of a chair to will himself to leave violence on the battlefield and not at home. Finnick’s overwhelming confusion. Katniss, hiding in closets and ‘losing’ entire days. Indeed, I’m not sure I’ve ever read a work of popular fiction with a protagonist as thick as Katniss. Capable hero, confused lover, disloyal friend,  vulnerable as both victim and perpetrator. Her pain becomes unbearable at the point she becomes unable to differentiate between violence done to and by her. Hers is a psyche manipulated as much or more than Peeta’s, though no tracker jacker venom was needed. And fittingly her -and the trilogy’s – story comes to a sad and lifeless end.

THE END OF VIOLENCE

But not until she deals one last blow to violence. In Mockingjay Katniss realizes two essential things: she was manipulated as much by District 13 as she had been by the capital; and that violence is cyclical and will continue unless someone stops it. Thus her final act of aggression is not to condemn one person among many, but the system of violence itself. In shooting the wrong President at close range, she unmasks the truth that violence only begets violence. Gene Sharp is an expert in stopping cycles of violence: “Sharp is not a moralist but a pragmatist, who bases his claims on an empirical analysis of history. He asserts that violence, even in the service of a just cause, often results in more problems than it solves, leading in turn to greater injustice and suffering; hence, the best way to oppose an unjust regime is through nonviolent action.” Indeed, Bishop Oscar Romero said, “There is an unshakable moral principle that says one cannot do evil in order to achieve good.” Revolutionary Violence only serves to replace one despot for another. One only needs to look to Africa and Soviet Russia for several stunning examples of how easily Resistant Violence can be transformed into Dominant Violence.

In the final analysis, Collins offers us little beyond a sturdy “No!” to violence, leaving us hungering for a strategy and lifestyle to say “Yes” to. What’s missing is a prophetic imagination. She leaves at least the following to her rabid fans to explore: the genuine power of Nonviolent resistance, the world peace game, and practices of reconciliation such as The Truth and Reconciliation Commissions of Africa that promote movement for people’s who have been mutually destructive.  She offers little hope beyond perseverance, no spirituality outside public ritual, and little insight into the world as it should be. Instead, what we get is a masterful look at the end of violence: the world as it is.

May the odds be ever in your favor!

—-
Marty Troyer is pastor of Houston Mennonite Church: The Church of the Sermon on the Mount. You can follow his work on his blog or via Twitter at @thepeacepastor.