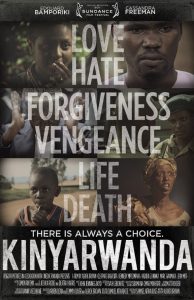 Kinyarwanda: Forgiveness is Freedom, a new movie from talented African American director Alrick Brown, is not a movie about genocide, though it is set in  Rwandan during the 100 days in 1994 during which over 1, 000, 000 Tutsis were killed by Hutus in an internecine bloodbath.

Instead, Kinyawanda is a story of the healing power of forgiveness and compassion, and the miraculous capacity of faith to transform intractable conflict into peace and hope. In particular, although the Rwandan genocide was marked by the murderous actions of so-called Christians, including many in the Catholic hierarchy, Kinyarwanda tells of a friendship between a Muslim mullah and a Catholic priest who collaborated to rescue thousands of Tutsis threatened by Hutu gangs. Although it takes place in the past, the film looks forward to a future in which all Rwandans are a diverse and  healthy community in a unified democracy.

I was born in 1950, immediately after World War II in which over 60 million died worldwide, and after the Holocaust in which 6 million Jews died. So I grew up in a world that had recently experienced death and destruction on an historically unprecedented scale. The earth’s population was traumatized by those events. In my own family, the trauma revealed itself by the way my parents were shut down emotionally: they never spoke about the horrors of the war, but rather wanted to remember the war simply as a positive, heroic, and victorious struggle for freedom and democracy.

When I was a teenager, I grew up with the backdrop of the horrors of the war in Vietnam, which was accompanied by the carpet-bombing of Vietnamese villages and jungles by American bombers and the wholesale slaughter of civilians. By the time I was in high school, I had started to develop a loathing of war and violence of all sorts. I was the product of a Christian family. My dad was a fundamentalist Baptist preacher, and my mom was a daughter of John R. Rice, famous evangelist and editor of the influential Sword of the Lord newspaper. I struggled with a fundamental contradiction. I saw Jesus as someone who had preached, taught, and practiced a philosophy of nonviolence governed by love and compassion. And yet my own Christian family seemed to support and justify great violence and bloodshed, even against innocent civilians, when that violence was commnitted in service to a greater moral purpose.

One night at the dinner table, I asked why it had been necessary to drop atomic bombs on Hiroshima and Nagasaki, killing hundreds of thousands of civilians. My dad reacted with defensiveness and anger. He explained that the A-bomb allowed the US to end the war faster with fewer American casualties.

Later, when I read Kurt Vonnegut’s novel Slaughterhouse-Five, I asked my dad about the Allied firebombing of Dresden, Hamburg, and many other German cities that resulted in the deaths of hundreds of thousands of German civilians. Dad explained that innocent people die in a war, and it was unfortunate yet necessary for victory.

The problem, of course, with any general account of the consequences of war, or discussion of the statistics of horror, or the data of mass murder, is that war and genocide are easily sanitized. We easily avoid or forget the personal, human dimension of any event involving massive bloodshed.

Kinarwanda reminds us of the deep spiritual wounds inflicted on individuals human beings by their experience of violent conflict, but it also offers a haunting reminder of the power of love, faith, and forgiveness to heal our woundedness.  As the Kanyarwanda web site recounts:

The Mufti of Rwanda, the most respected Muslim leader in the country, issued a fatwa forbidding Muslims from participating in the killing of the Tutsi. As the country became a slaughterhouse, mosques became places of refuge where Muslims and Christians, Hutus and Tutsis came together to protect each other. Kanyarwanda is based on true accounts from survivors who took refuge at the Grand Mosque of Kigali and the madrassa of Nyanza. It recounts how the Imams opened the doors of the mosques to give refuge to the Tutsi and those Hutu who refused to participate in the killing.

The theme of Kinyarwanda is not violence, savagery, death, and despair, although all of these are portrayed in stark terms. Rather, the film’s theme is our surprising human capacity to reach out to each other across the boundaries of blood and belief, kinship and catastrophe, to find hope in our common humanity. The moral center of the film is expressed by actor Cassandra Freeman, who plays Lt. Rose, a Rwanda Army officer who helped to end the genocide and then presided over a re-education camp for Hutu soldiers who had taken part in massacres of Tutsis and who were seeking a way to return to citizenship in a united and democratic Rwanda.

To her audience of murderers,  Lt. Rose says:

Forgiveness is not the suppression of anger. Forgiveness is asking for a miracle, the ability to see through someone’s mistakes to the truth that lies within all of our hearts. Forgiveness is not always easy. At times it is more painful than the wound we suffered.  And yet it is more painful than the wound that was inflicted. Attack thoughts towards others are attack thoughts toward ourselves. The first step in forgiveness is the willingness to forgive. So why am I talking to you about forgiveness? You are the ones who committed the crime. You are the ones people have anger and hatred and bitterness towards. You are the ones who have caused great suffering and pain. I talk to you about forgiveness because you, more than anyone else, must understand what it means to forgive you.  You must understand the pain and suffering you have caused so many. You must take full responsibility for what you have done, and repent.

On the basis of full disclosure and moral clarity,  Kinyarwanda is saying, we can arrive at a new truth. Enabled by compassion, we can take a new path in human history. On hearing the true stories of others, we can forgive them. On disclosing our own crimes and failures, we can be forgiven. By acknowledging the painful truths of the past, we can reconcile with our enemies and repair our broken society. We can create a new future, unbound from the past.

In Seattle, the film is part of the Langston Hughes Performing Arts Center’s African American Film Festival. Read the schedule and buy advance tickets from the SIFF Cinema Box Office at the Uptown Theater.

—-
Andrew Himes is a Seattle writer, filmmaker, technologist, founder of the Voices Education Project, co-founder of Poets Against the War, and author of The Sword of the Lord: The Roots of Fundamentalism in an American Family. He is the grandson of John R. Rice, the prolific and influential 20th century dean of Christian fundamentalists, and the son, brother, nephew, and cousin of many more Baptist preachers. He is a co-founder of the Compassionate Action Network, and an Ambassador for the Charter for Compassion.