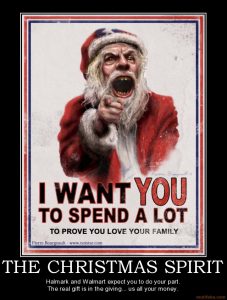 It doesn’t seem that much to ask. With all the passion, energy and hype around Christmas, you’d think there would be some interest in refining our focus on what we were really celebrating.

Frenzied shopping, TV specials and holiday events seem to grab all the headlines and soak up all of our available time and energy.

Christmas has become unbelievably complicated, but my personal bias is that anything that leaves us exhausted and irritable is contrary to the spirit of Christmas.

But what is the “spirit of Christmas”?

We could learn a lot from looking at that first Christmas.

One of many ironies is that the date of Christmas is not even remotely defined in the original texts. In fact every detail we would want to know is neglected.

Mary was very young – about  13. Joseph was older, perhaps much older. Matthew 1:18-19 describe Joseph as a “righteous man” – clearly NOT a teenager. In fact the most reliable scholars are convinced that Joseph was a widower – with children.

If Joseph had been a teenager, the couple would have been expected to live with his parents.

We hear nothing of Joseph after Jesus is 12, so it is assumed by most scholars that he died around then.

And yet I love this jumbled story precisely because it is such a human story. Jesus, at least humanly speaking, was not born into royalty. In fact consider the world he was born into; his parents had a rushed (perhaps even forced, and certainly arranged) marriage under questionable circumstances, death threats at his birth, homeless and in exile as an infant, a fugitive from the law as a child, returning to his home culture as the target of scandal, growing up in the bad part of town (Can anything good come from Nazareth? John 1:46) his own family thought he was crazy (Mark 3:21) and finally publicly executed for crimes against his own religion and state.

In short, what I like best about Jesus is that he is one of us.

In the culture of the time, it was only the sons of the educated who had access to education – and it was only the sons – the eldest sons usually. Everyone in that culture, especially in Jesus’ hometown, knew that Jesus was not educated – no son of a common manual laborer would be (Matthew 13:54-55).

To even consider God taking shape as a human baby is unnerving and unsettling. This demands something much different, and much more, than a deity that demands ritual or obedience.

If you have been around a baby lately, you know what they want – our undivided attention and openness to them.

We owe this baby no less.

The accretions of time and traditions of contemporary Christmas would be unrecognizable – if not blasphemous to the early Christians.

From Black Friday to White Christmas, it is all a distraction. Love them or hate them, they have nothing to do with the original Christmas. At best they remind us of the shadows of the real.

And somehow we see something I never would have imagined possible; the bland spectacular.

I’ve been to more than my share of these Christmas and other holiday events, concerts and services.

I’ve participated in a few, and walked out of some.

Few, if any, have matched the searing simplicity and stark beauty of a star-filled sky on a clear and frigid evening, when, to quote a famous Christmas song, “every souls feels its worth”.