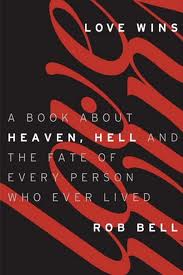 No, it isn’t a thorough theological treatment of the afterlife, but it certainly provokes important questions. The broad vision of the book is admirable and courageous.

One of my favorite themes in this book is how Rob Bell points out that many people choose not to respond to Jesus because the Christ that is preached to them, is not the same Son of God portrayed in the Scriptures. Sometimes, we start to talk about eternity, we need to ask: Which Jesus did a person reject?

Another theme that matters quite a bit in our theological discussion within evangelicalism is wrestling with how God the Father interacts with God the Son on the cross. Do we serve a God who commits some form of cosmic child abuse, pouring out wrath upon Jesus as he was crucified? Rob Bell wisely answers this with an emphatic: N–O!

On the issue of the atonement, it brings me great joy that the only resource Bell mentions in his resource list is written by a close mentor and family friend of mine: Mark D. Baker.

Ever since I first heard Rob Bell speak at a youth specialties conference in 2002, I’ve been impressed with the ways he integrates historical context into his preaching. From the early days of hearing him speak, I love learning about Jesus and Paul as rabbis, the Caesars as persecutors of the early Christians, and the various customs and religions of the Roman Empire.

Bell typically focuses his attention on being sensitive to the Eastern/Jewish worldview from which the Christian Scriptures emerged. He understands, as many biblical scholars have come to recognize, that we cannot extract the Bible or Jesus from the Hebraic worldview.

In Love Wins, although Bell does not use the language of “open theism, ” his view of human freedom certainly gives us hints of this influence in his theology. Again, as an open theist myself, I was impressed with the way that Bell poetically expressed the tension between human freewill and God’s desire: “Does God get what God wants?”

A basic premise of open theism is that the Christian church needs to recover a Hebraic view of God over against the Hellenistic perspective that dominates classical theology. Here, Rob Bell is consistent with his focus on the worldview of the Jews throughout much of his preaching and writing.

Perhaps the only major critique that I have of Love Wins (which, really is a minor one) has to do with the fact that when talking about hell, Bell loses touch with the Hebraic realities that inform his view of human freedom in the 1st place. What I mean is that I think he needs to consider the way that Hellenistic philosophy has crept into our understanding of the nature of human beings.

As I said in my recent hell series (Hell Yes. Hell No! Or Who the Hell Cares?):

A presupposition of mine is the validity of what scholars call conditional immortality. Church Fathers such as Theophilus, Irenaeus, and Justin Martyr argued this perspective. Clark Pinnock states: “God created humans mortal with a capacity for life everlasting, but it is not their inherent possession.” The idea that humans are innately immortal is foreign from biblical thought. Greek philosophy fuels this assumption.

If scholars such as Greg Boyd, Clark Pinnock, and John Stott (to name a few) are correct, then the idea that humans are innately eternal creatures is an imposition on to the biblical text. A simple example might be John 3.16: “God so loved the world that he gave his only Son, so that everyone who believes in him won’t perish but will have eternal life.”

According to the most quoted Bible verse in history, believing in Jesus Christ guarantees that a person will not perish, or to put it another way: a person will not die permanently. Throughout the Bible, the Final Judgment of those who persist in unbelief is connected with destruction, annihilation, and absolute death.

The most controversial point in Love Wins is the suggestion that some people might have the potential to repent after death, and to therefore be reconciled to God and God’s people in the new creation. Although some accuse Rob Bell of being a standard universalist, the reality is that he presented an idea more consistent with postmortem repentance.

In other words, it might be possible that some who go to hell will realize in the next life that they messed up and are in need of a Savior. At that point, consistent with the God who always gives us free will, some might be saved from hell. As CS Lewis is noted for expounding: hell is locked from the inside.

In my recent series on hell, I express that the language of fire in judgment throughout the Bible always seems to have a final point: refinement. So, in a sense I think Rob Bell might be on to something. The problem is, that based on his book, he seems to believe that people will be in a literal place called hell for eternity until they repent. But, according to an ancient Jewish worldview, death is the ultimate end of existence. When the New Testament authors come from this understanding, they come to understand immortality as only possible as a gift from God in Jesus. Eternal existence, of any sort, will only be reality for Christ-followers.

After the 2nd coming of Christ and the final judgment, those who persist in refusing to be reconciled to their Creator after being resurrected on that final day will cease to exist. The fires of God’s purifying love burns them up like chaff. Yet, in God’s mercy, it seems consistent with the narrative of the Scriptures that on this final Day of Judgment, some might in fact choose love… choose Christ… And thus find themselves receiving the gift of resurrection into God’s newly restored creation.

If Rob Bell had applied the Hebraic idea of absolute mortality, which in the New Testament becomes conditional immortality, he would have arrived at the view I recently argued: purgatorial conditionalism. Besides this misstep in Bell’s theological discourse, I greatly appreciate the book Love Wins and recommend it to anyone willing to discover a God who has not given up on creation or humanity!

FOR MY VIEW ON HELL, CHECK OUT THE SERIES: “HELL YES. HELL NO! OR WHO THE HELL CARES?“