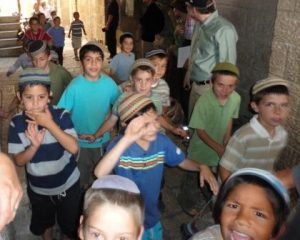 My 1 year old daughter is at the stage in her development where she is captivated by anything around her.  Whether a shoe, toy or even her own foot, she looks at each object with a curiosity and wonder that is contagious.  In Matthew 10:13-16, Jesus says the Kingdom of God is for the children.  He goes on to say that if any of us don’t receive the Kingdom like a child, we will not enter.  To have eyes that see and experience the Kingdom, we have to embrace child-like wonder.  We must receive new eyes, expect the unexpected and embrace a Kingdom imagination. In regard to embracing an imagination that transcends the violent paradigms instilled in our culture, John Paul Lederach describes the importance of serendipity.

“Serendipity describes the fascination and frustration of sideways progress that constitutes the human endeavor of building peace in settings of violence, for constructive social change is often what accompanies and surrounds the journey more than what was originally and intentionally pursued and produced” (Lederach, 115).

Standing as equals at the cross, while adopting a serendipitous imagination for the Kingdom doesn’t allow Christians to settle for a theology of possession and oppression as has manifested itself in Zionism.  Instead, we must set aside this extremism that justifies the morally unjustifiable and fully embrace the life and imagination of one captivated by the Spirit who seeks to live in the way of the Prince of Peace.

The reality is that there are massive numbers of Israeli citizens (both Jew and non-Jew) that not only disagree with their countries’ current policy (as are largely supported by the U.S.), but that are advocating for an Israeli withdrawal from the West Bank.  Further, the vast majority of Christian and Muslim Palestinians in the West Bank have embraced strategies of non-violence to combat the Occupation.  In the end, the goal is peace and equality for both Israel and Palestine.

Read Part 1: The History and Modern Manifestation of Christian Zionism

I will never forget sitting in the home of a Muslim Palestinian family in the West Bank village of Zakarias as they offered each one of us food, drink and a place to sit.  Standing before us, the father of the home met and interacted with a neighboring Jewish Israeli Settler for the first time in 41 years.  The home of the father’s son was scheduled to be demolished for the sake of Israel’s Separation Wall expansion, yet the Palestinian father remained calm and simply told the Israeli Settler, “I wish you would have come to my home earlier, I would have invited you in.” The Settler was immediately taken back and said he would help advocate for the home of the Palestinian’s son. 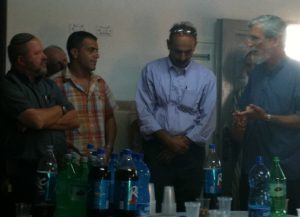 While sitting on the lawn of a community center in the heart of the Daishe refugee camp in Bethlehem, Mazen – a Muslim Palestinian – told the story of his father being murdered by a soldier in the Israeli Defense Force.  Instead of leading an armed insurrection against the IDF in revenge of his father death, Mazen said he has chosen to fight for the honor of his father through non-violent resistance. He is now part of the MEJDI peacemaking team that facilitates dialog between Israeli’s and Palestinians as a way to break down walls of stereotype and prejudice.

Sitting in a hotel conference room in Ramallah, I listened to Dr. Nabeel Shaath, the Chief Negotiator for the Palestinian Authority, say, “We will no longer tolerate armed revolution.  Instead we choose non-violent resistance in the way of Jesus Christ, Nelson Mandela, Gandhi and Martin Luther King Jr.”  Moments later I heard the unbelievable story of the one of the leaders of the non-violent movement affirmed by Dr. Shaath.  Ayed Morrar led his village of Budrus in a nearly year long non-violent protest that thwarted the expansion of the Separation Wall scheduled to cut through their land.  He said, “In choosing non-violence, we must be willing to experience violence as we will not take up arms in the name of peace.”

While sitting atop Ammunition Hill – Israel’s equivalent of the U.S. experience on the beaches of Normandy – I listened to the story of Liel, a Jewish Israeli and former soldier in the Israeli Defense Force.  He shared of his experience in the IDF as a young boy and his journey towards setting aside his automatic weapon to seek peace through interfaith participation in environmental restoration.  Having grown up in a culture that told him Palestinians were evil, he highlighted his first interactions with Christian and Muslim Palestinians as they came to understand their mutual humanity.

Read Part 2: “Why Do People in Your Country Think I’m a Terrorists?”

Crossing through the winding checkpoints of the Separation Wall, I ended up walking into a small souvenir shop in Bethlehem.  The shop was the bottom floor of a beautiful home that was now surrounded on three sides by the haunting Separation Wall.  As I spoke to the female shop owner, I could see both despair and hope in her eyes.  She told me that the road in front of her house used to be a thriving marketplace, but now that the wall surrounds her she hadn’t had a customer for three weeks.  Continuing, the woman spoke of her love for Jesus the Messiah and explained that he is her hope in the midst of such oppression.  She had wood figurines of Jesus’ nativity with a wall resting in front of the manger.

Seeking to faithfully embody the Covenant community they were entrusted to be in the Hebrew Scriptures, there are multitudes of rabbi’s who are pleading for the Jewish people to step fully into their true vocation.  Dr. Marc Gopin is a Jewish Rabbi, yet is one of the most critical voices of the current actions of the State of Israel as are funded and supported by the United States. Having heard his heart over and over, it is clear that Rabbi Gopin is critical of the State of Israel because he is so passionately committed to Yahweh’s mandates of justice and peace given to the people of Israel.  He is “pro-Israel” in the sense that he wants and expects them to fully live into Yahweh’s call on their lives as is seen the Hebrew Scriptures, Talmud and Mishnah.

Finally, there is Neve Shalom/Waas Salaam or Oasis of Peace.  This is an intentional community of Christians, Jews and Muslims all living together and sharing life in one small village. They see themselves as a living, breathing example of what life in Israel and Palestine can look like if mutual respect and dignity becomes a societal value.

These are just a few of the mustard seeds of hope that are budding forth in an environment that often gets cast off as eternally hopeless. As people who have embraced a Kingdom imagination, we trust that these seeds of hope will plant deeply in the hearts and imaginations of Jews, Muslims and Christians in the Middle East. Specifically, we trust that these seeds of hope are merely a foretaste of what is to come in the story of Israel and Palestine.  A Jesus centered eschatology doesn’t allow for a fatalistic mentality that says there will never be peace in Israel.  Instead we trust that the peace we already see coming to life will pervade the land in this generation.

Series Note: This post is the first in a three part series on the topic of Christian Zionism and its implications in Israel and Palestine.  There are few topics more hotly debated both in the Church and around the globe.  Lines have been drawn both ideologically and theologically to the point that many aren’t willing to rethink their paradigms, which has led to divisive rhetoric and hostility. Israel’s security is a real issue and I care deeply about it. I want Israel to exist and disagree vehemently with anyone or any country that does not want the State of Israel to exist.  I want Israel to be secure.  But I disagree vehemently with the policies Israel is pursuing in order to achieve that security and believe firmly that the hard-line positions and continued settlement developments are exactly what is threatening Israel’s security.  If they continue to take Palestinian’s homes and lands, if they continue to fence them off from their families, neighbors, grazing lands, hospitals and jobs, if they continue to humiliate and oppress Palestinians at checkpoints, if they continue to deny funding to Palestinians’ education, etc…then history tells us that they will eventually push the Palestinian humanity to a point where non-violent resistance will no longer be pursued.  With that being said, this is a topic too important not to discuss and corporately seek discernment on as we seek to faithfully follow the Prince of Peace.  Please see this as an invitation to enter a conversation of mutual respect that leads to actions that better represent the Kingdom Jesus came to proclaim through word and deed.

For further explanation, see this video blog series I posted while on the ground in Israel/Palestine with a Just Peacemaking delegation this past summer.

Jon will be giving an extended presentation on this topic at Soularize in San Diego, October 18-20, 2011.

—-
Jon Huckins is a veteran youth pastor and public school teacher who is now on staff with NieuCommunities, a collective of missional church communities who foster leadership and community development. After much international travel and study in the Middle East, Jon focuses much of his writing and graduate studies at Fuller Seminary on ethics and social advocacy. Further, Jon writes for Youth Specialties and loves to tell and live out new stories with teenagers. His book Teaching Through the Art of Storytelling released in December ’10.  He lives in San Diego with his wife Jan, daughter Ruby and three legged dog named Harry. Jon blogs here:http://jonhuckins.net/.  You can also follow Jon on Twitter and Facebook.