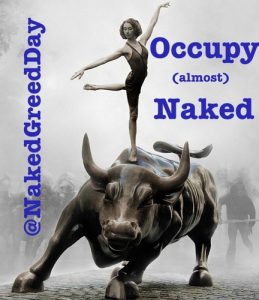 “When someone sues you for your outer garment, give them your undergarment as well” (Matt. 5:40). Jesus said that when someone sues you for your clothes off your back (presumably because you have nothing else of worth), you are to take off all your clothes and give them to the greedy people suing you. Yes, Jesus taught his followers to strip naked in public court and hand over their underwear. This seemingly absurd teaching of Jesus is actually a powerful way to take a public action against economic exploitation, corruption, and greed; and now is the time for us to expose naked corporate self-interest by baring our own bodies in public.

Today, November 12, 2011, we invite you to attend Naked Greed Day, when we will gather at banks, corporations, and trading companies that have amassed billions of dollars on the backs of the 99% and remove one piece of clothing as a symbolic gesture to expose their greed.

Baring ourselves invites those who profit so much from the low wages paid to the majority to change their behavior, and it focuses attention on them in a new way so that respect for their exploitative business practices are laid bare. The removal of clothes in public to humiliate oppressors was done in South Africa to oppose Apartheid, in Liberia to end the wars and oust Charles Taylor, and at other significant times in history.

This third way of dealing with economic exploitation and abuse that is neither violent nor passive is one of the powers of the Occupy Movement. There are violent ways to reduce debt and set the oppressed free: it is why those who own the loans have access to such powerful militaries, to make sure violent debt reduction options are less likely to happen. But I like to imagine a nonviolent revolution that includes debts being forgiven as credit card accounts in corporate computers are erased and trillions of dollars of debt disappears. There are nonviolent ways, including grassroots demonstrations and well-written legislation, to persuade and require the purveyors of economic injustice to reduce debt, increase wages, and contribute more to the common good of all people.

A passive way to deal with having the shirt sued off your back is just to go along with it silently, and many people choose to do this. But Jesus did not say, “When someone sues you for your outer garment, you’re probably going to lose anyway so just give it to them and go home and be glad you still have your underwear.” Jesus did not say, “You can’t fight City Hall and you can’t fight Wall Street.”

Jesus did say that when someone is destroying you economically you should be neither passive nor violent, but you should expose their greed by taking off your clothes in public. So let’s do it.

—-
Paul Alexander is a professor of Christian Ethics and Public Policy at Palmer Theological Seminary of Eastern University, director of Public Policy for Evangelicals for Social Action, and founder of Pentecostals & Charismatics for Peace & Justice.