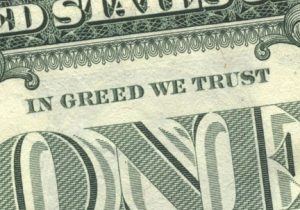 In the Lord’s prayer, our daily prayer, we pray, “forgive us our debts, as we forgive our debtors.”

As we forgive our debtors.

Forgive us our debts.

In Aramaic, debt and sin are the same word, ḥōb.

So when Jesus tells a poor cripple to get up and walk, he tells him, “Your sins are forgiven, ” he is using the Aramaic word, ḥōb, which could mean both things. In all likelihood, he’s not just forgiving a debt owed to God. He’s not just healing him of his illnesses. He’s forgiving his material debts, owed to other members of the community.

Matthew’s lords prayer uses the word ὀφειλήματα, which generally refers to financial obligations, but also encompasses sin and the sense that the debtor was taking from society.

Debt is a social institution, held together by various pledges or social collateral. When Jesus corrodes these institutions by forgiving economic debt, the more maximal rendering of the text, you end up with something that’s economically radical.

Jesus, in this parable, compels the society to release debts through his statement to this man. Can you imagine? “I put my medical bills on a credit card, but Jesus told me I don’t have to pay it back.” Try writing that letter to Chase Bank.

But here’s the objection. Christians protest that they, personally, are not owed any debts. In Jesus’ day, debts were owed to people, not institutions. We are not Jesus, and we don’t have the authority to forgive debt.

In our society, we’ve delegated most of our moral decisions to institutions: corporations. There’s a schizophrenia here, we’ve displaced all of the immoral or difficult decisions Christians face onto amoral institutions.

So real estate speculators inflated the price of housing until the working poor, if they wanted to buy a house, had to sign mortgages with their own blood. But it turned out to be a contract signed with the devil himself. For the devil has staked his claim on their property again, even after devouring 400 billion from those same taxpayers, leaving them homeless.

But what is even less Christian is that when the homeless make an encampment in the center of their cities, they are assaulted with tear gas and pepper spray, jailed and beaten! When they try to snatch sleep on street-corners, they are awakened by police enforcing vagrancy laws. Their situation is one of debt. Their very clothes, housing situation, and sleep patterns make job application impossible.

Christians forgive debts, and Jesus releases the indebted from their debts.

When people say this is not possible to forgive the real economic debts of the poor, I want to ask them if they really believe that a sacred part of our tradition, economic justice, is actually forbidden in our society. Is a part of the practice of Christian faith banned because it is too radical? Because amoral and immoral forces govern our economy so deeply that an individual Christian, a gathering of Christians, a movement of Christians, cannot forgive an iota of mortgage or credit card debt? In that case, the faithful witness of the Christian would be insurrectionary martyrdom.

But it’s actually easier than that. Alone, we do not have the power of Christ to forgive sins. But as the church, the body of Christ on earth, we do. I believe there is a seed of our faith that has been planted by the dissident occupiers, towards the forgiveness of debt that was Christ’s deep desire for us, so much so that he told us to repeat it in our daily prayer. It’s this way that we, by our holy treatment of our community’s economic relations, water the seed of faith, until it grows into a sheltering oak, the Kingdom of God.

If our structures, our societies, do not allow us to practice Jubilee, or forgive debt as Jesus teaches, we need to work to change that. Christians must clamor for debt forgiveness. We need to be the voice, as Jesus was, proclaiming Jubilee.

But I don’t believe that we are helpless. I believe that we live in an age of peaceful, nonviolent protest where we can carry the witness of Christ’s radically forgiving love into the streets.

And so I repeat my challenge: if we are not allowed to forgive debts, if truly this is a function of the market, we need to walk into the temple and overturn the market. And I pray that we not be crucified as Christ was for his actions.

—-
Jeremy has been an activist ever since he accidentally ate the red pill instead of the more harmless blue one. He converted to Christianity while serving a six-month prison term for civil disobedience to close the School of the Americas. He blogs and tweets about faith. He serves as a volunteer chaplain to OccupyDC with the OccupyChurch movement.