Jim Wallis, longstanding friend of Red Letter Christians and the president of Sojourners, believes something just as radical as Jesus’ sermon on the mount: that politics in the U.S. can be different than it is right now. After reading his new book On God’s Side we wanted to chat further.

Jim, do you recognize something that is different about politics in this particular historical moment compared to politics of the past? Is it the same? Is this generation different than others?

Right now it’s very clear that our politics is broken. We are seeing the worst polarization between political parties that we’ve known in recent history. Winning seems to have replaced governing and many our leaders need to be reminded to seek the common good over promoting their particular ideology.

But at the same time, I think that there is hope. I see a new generation of young people of faith—from a wide theological and political spectrum, who care about their world, engage it, and want to connect their beliefs with social change. Extraordinary things can happen when we focus on the common good and transcend our own politics to help the “least among us.”

When we let go of the notion of God being on our side, advocating our particular agendas, we have the opportunity to join God on God’s Side. Where are you seeing Christians—on the right and on the left—doing this today?

A great example has been the fight for immigration reform. It’s been exciting to see unity across the traditional political spectrum. Organizations like Sojourners are working with Focus on the Family and the Southern Baptist Convention to defend the “stranger” among us. Together, we’ve created an Evangelical Immigration Table to call for a bipartisan solution on immigration that respects the God-given dignity of every person, as well as the rule of law, protects the immediate family and our national borders, ensures fairness to taxpayers, and that will establish an earned pathway to citizenship.

You say, “God’s politics is most concerned with the powerless.” A lot of folks at RLC agree! What has to happen—in hearts, in Washington DC—for a large scale, or small scale, shift toward concern for the powerless to occur?

Broken systems generally cannot fix themselves. I believe that for Washington to change there must be a movement from outside. And at the heart of most social movements in history, there have been people of faith. We need a personal conversion to the new way of living that Jesus has invited us into and we need to aim that conversion toward changing the world and teaching others how to live in the kingdom of God.

In your book, you’ve noted that we have to be converted from self-interest to neighbor-interest. Given human nature, a tall order! Can you share a story about where you’ve seen that happen? 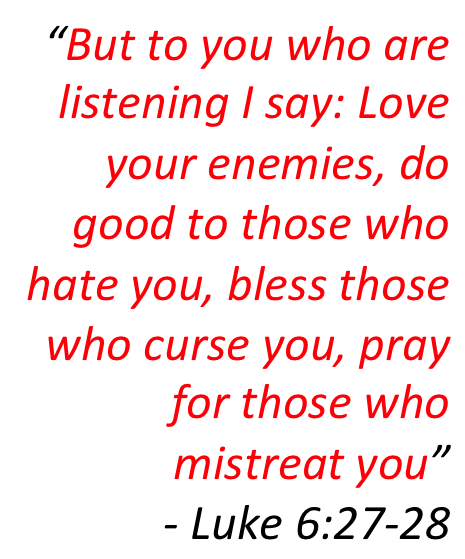 A great example of this is the story of Heartsong Church in Cordova, Tennessee. When the Memphis Islamic Center bought the land next to their church, the pastor, Steve Stone could have had his congregation protest their presence at worst or just simply ignored their Muslim neighbors. Instead, the church put a sign up in front of their building to welcome the Islamic center to the neighborhood. This act of hospitality and neighborly love led to a relationship between the faith groups, which has included serving halal meat at church barbecues and offering Heartsong’s building for Ramadan prayer services while the Islamic Center was under construction.

The partnership between the faith communities has attracted media attention and after a group of Muslim men in Kashmir, Pakistan saw a CNN report, they called Steve Stone, saying “I think God is speaking to us through this man.” Another of the Pakistani men asked “how can we kill these people?” while a third man was so moved that he went to the local Christian church near their mosque and cleaned it inside and out.

We want to get inside that kingdom imagination of yours. What would it look like to surprise our enemies with an approach other than wars of occupation?

We all know how a surprising warm or understanding word or a “soft answer” can sometimes neutralize anger and lessen confrontation. As Christians, we’re called to seriously listen to and at times absorb some of the anger behind understandable and legitimate grievances. We’ve all seen this on personal, familial, and communal levels and I believe that it can work on a larger scale.

I think that in many cases, surprising our enemies by providing food aid or medicine or other things they desperately need might change their attitudes toward us. Providing humanitarian aid before dropping bombs could change the hearts of our enemies in a more effective (and less expensive) way.  As I wrote in my latest piece about Syria, “we fundamentally reject the assumption that not initiating military action is doing nothing.”