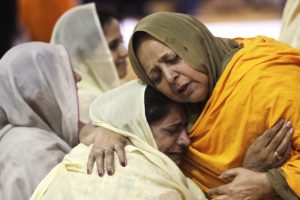 What’s the goal of faith-based work: Getting people to believe something or offering help and healing regardless of beliefs?

The recent experience of Elly Scott, a brilliant young writer in Knoxville whom I’ve known since she was her preschool daughters’ age, raises this question for me.

A neighbor boy, 7, regularly climbs onto a church bus to ride 25 minutes from their inner-city neighborhood to a church in Knoxville’s suburbs. This child’s father is in prison. The grandmother who raised him died last year. He now lives in a run-down house with his mother, who, Elly says, seems to always be asleep.

In his case, what is meaningful religious education and what is psychological abuse?

“The little boy told my girls a few moments ago that a preacher said that if they didn’t believe in God, they were going to Hell. My girls just stared at him round-eyed and open-mouthed.

“I broke a personal rule to not dispute other people’s religions and told him I thought that was a mean thing for the preacher to tell a little kid – and that I didn’t believe it anyway.

“Then I said ‘Um, why don’t you kids go outside and eat a Popsicle?'”

Now Elly is trying to figure out how to deal with this topic the next time it comes up.

“Can I tell a child that what he hears at church is mean and total bull? What is this church trying to accomplish by busing in all these vulnerable kids to listen to hate and fear?

“My conclusion is that the church is a hostile and poisonous entity in the community. As far as I know, they don’t do any other kind of charity work in the neighborhood.”

Yikes. “Hostile and poisonous entity.” Are we Christians really like that?

I know John quotes Jesus as saying, in John 14:6, that “no one comes to the Father except through me.” But Jesus also says, in John 6:45, “Everyone who has heard and learned from the Father comes to me, ” reversing the order of learning.

It’s interesting, in this week of the hate-based killings in the Wisconsin temple, to contrast the teachings of Sikhism with the need of some believers of any stripe to assist God with the divine saved-lost lists.

Sikhs – the word means “student” – spend early morning hours daily studying, praying and meditating to nurture and recognize the divine in themselves and in all creation. Learning about the one God of all creation, combined with a life of service to others and a dedication to justice and equality for all, means that Sikhs concern themselves not with heavenly passwords, but with earthly hospitality.

In the wake of that awful shooting in Wisconsin last Sunday, while bodies of the people they had just prayed beside were being carried away, a reporter friend of mine told me that some of the members of the gurdwara stayed behind to offer journalists and police officers food and water, the “langar” community meal that concludes every Sikh service.

Consider this boy in Knoxville who scavenges for security despite his grandmother’s death, mother’s neglect and father’s absence. Using the Sikh measure, wasn’t it the “casual atheist, ” as Elly calls herself – who offered a Popsicle on a hot summer’s day and the patience of a listening ear that evening – and not the preacher who showed divine love?

In fact, Elly’s credo is probably more life-building for those around her than that of many people of faith. As Elly puts it: “We believe in the power of love, the miracle of beauty, the wonder of creation, the awesome unknowability of the universe.”

And even though my personal creed is more detailed than that, to her statement and to her life of service to her neighbors, I say, “Amen.”

—-
Kay Campbell is Faith & Values editor and reporter at The Huntsville (Alabama) Times and an ordained elder in the Presbyterian Church (USA). Most recently, she was awarded the 2011 Award for Commentary from the Religion Newswriters Association. You can reach her via email at: [email protected]