Like many today, Jonathan Brooks, Senior Pastor at Canaan Community Church in Chicago’s Englewood Neighborhood, is concerned about the juvenile justice system in America. Today he shares about the problem and—if the church will speak out—the solution.

Jonathan, what is broken about the juvenile justice system today?

Broken family structure and the broken education system fail many of our children daily.  However, society still makes the same demands of success and prosperity on these students, even though they have an extremely different reality.  These initial inequities lead many to seek success and prosperity in alternative ways.

Many get caught breaking a law, get arrested, and then—in the words of Michelle Alexander—are “shuttled from their decrepit, underfunded inner city schools to brand-new, high-tech prisons.” If they are released they are relegated back to the same broken households and education systems that failed them in the first place, this time mandated to experience different results or return to prison. Many of these young people are tracked for prison by third grade and labeled criminals by the time they reach their teen years.

Yikes! Michelle Alexander, the author of The New Jim Crow, describes an awakening to a racial reality to which she’d been blind. Can you put some flesh on that? To what did she, have you, should we awaken?

In the 1950’s and 60’s Jim Crow kept black and brown people separate from white society and create a permanent underclass based on race. Today these same black and brown people are overwhelmingly overrepresented in our incarceration system.  At one point in American history, to be black meant to be a slave; then being black meant to be a second-class citizen; now being black is to be a criminal.

Just like it affected the psyche of minority children in the past, it is affecting them now.  The landscape of the juvenile justice system is different than it was years ago. Where it was once concerned with deterring crime and punishing those who perpetrated it, it seems to now be concerned with controlling the black and brown children in this country and preparing them for a life within the system of mass incarceration.

It is almost humorous to me that I would have to put flesh on that statement, if you visit any prison in America it would be extremely obvious that they’re overwhelmingly filled with people of color, especially African Americans.  Without any statistics to confirm—although they exist—I could ask you to walk through any juvenile detention center or adult prison and you could easily tell me which races are being affected by mass incarceration.

If you believe this picture is just, then you must also admit that you believe certain races are more prone to criminal behavior than others.  That belief has nothing to do with justice but an incorrect view of humanity.

What keeps us from waking up? What, in particular, makes it difficult for the white majority to see what you see, what Michelle Alexander has seen?

The system as it is set up now is created to keep us lulled to sleep; it uses a very sneaky premise to justify and hide the underlying caste system.  This system says that punishment is warranted because people choose to commit crimes.  Since they make the decision, they are responsible, and they are locked up.  It makes parents believe their child can escape the system if they are on their best behavior.

However, even on their best behavior they are still harassed, searched, labeled and condemned.

Here is the other problem; no one is always on his or her best behavior!

What teenager does not make mistakes? How many of us have done something that could have gotten us arrested had we been caught or not shown grace?  The white majority fails to realize the system makes criminals out of children who make mistakes, sometimes very serious ones, but mistakes nonetheless. Do we believe our children are better than these children or are they just given more opportunities and more grace? Don’t all of our children deserve the same opportunity for growth rather than being headed for prison before they are old enough to vote?

How is your congregation a part of the solution?

We have chosen to be a congregation that shares love, shows love and is shaped by the love we show to the incarcerated as well as their families.  Through various partnerships we use our facilities to house two alternative mentoring programs for young men and women in the juvenile system.  We also partner with other ministries to provide ongoing support to those who have family members incarcerated from the Englewood neighborhood.  We visit them weekly to listen, talk, laugh, cry, pray, and let them know we care.  We also deliver Thanksgiving baskets and Christmas gifts to the families on behalf of their incarcerated family member.  The families are made aware that the gifts are from their family member and we are only the delivery people! 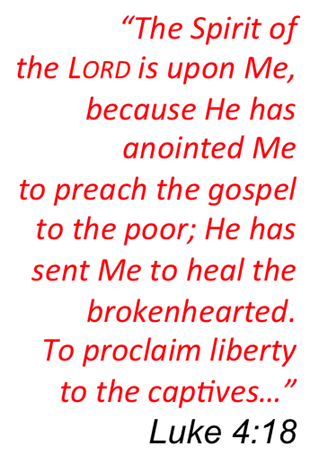 We have also made the decision that having a criminal record will not keep an individual from working for or with us.  Many of the young people in our programs, upon completion, are given the opportunity to work as mentors for the program. Most importantly, we are offering programming that includes art, sports, music lessons, college scholarships, and other activities as opportunities for children to make better decisions and hopefully never enter the system in the first place.

Break it down. In your opinion, what has to happen for things to change at a national level?

In my opinion, those concerned with justice must lead the fight to re-humanize those we have considered criminal.  Rather than looking at individuals as the unwanted other we must begin to learn their stories and connect with them as people again.  We must aggressively seek to eradicate the incarceration of our young people and provide services rather than prisons.

Though once outlawed, at the beginning of the twentieth century, private corporations once again can own and operate prisons for profit.  The juvenile justice system is the feeder for these privately owned adult prisons, if we are going to dismantle this injustice—profitable imprisonment—we must choke out its feeder system.  Once these children enter the system it is almost impossible to get out because it is profitable for those who have the greatest influence on lawmakers.  If the church sits back and says nothing about this racially charged injustice, it will be just as damaging as the church’s silence throughout the injustices of slavery and Jim Crow.

Michelle Alexander has noted, “The fate of millions of people—indeed the future of the black community itself—may depend on the willingness of those who care about racial justice to re-examine their basic assumptions about the role of the criminal justice system in our society.”

WATCH: Bryan Stevenson on Mass Incarceration, the Juvenile Justice System, and the cases he’s argued before the U.S. Supreme Court