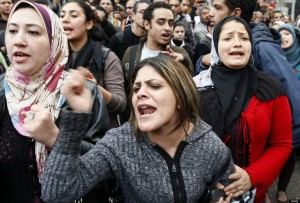 I’ve heard a few folks offer comparisons regarding the amazing events that have unfolded in Egypt over the last few weeks, including the Tea Party (the original one in Boston, that is), the fall of the Iron Curtain, and the struggle against Apartheid. But I’ve been especially interested in comparisons to the Protestant Reformation.

The timing, of course, is interesting. The Protestant Reformation began breaking out when the Christian faith was about 1500 years old, and the Egyptian Revolution is breaking out when Islam is approaching the same age. Both movements can be seen in terms of a decentralization of power. Both must interact with counter-movements that want to maintain the status quo or return to an idealized earlier time. Both have depended on a breakthrough in communication technology, the former employing the printing press and the latter the internet and social networking.

Of course, this comparison narrative can be problematic. It can reinforce a patronizing and superior attitude among Christians like me, since some of us find it tempting to see ourselves as the older, more mature brother to Islam, even as we see ourselves as the younger, more energetic and innovative brother to Judaism. The latter attitude is dangerous in light of Paul’s writings (see, for example, Romans 11:17 ff), and the former is dangerous when we recall Jesus’ paradigmatic parable of the Prodigal Son.

The comparison can also obscure another fascinating possibility when we remember that the Egyptian revolution involved the Muslim majority and the Christian minority working side by side, as this YouTube video demonstrates quite movingly:

Mr. Osman, the video’s creator, writes, “In Egypt, Christians and Muslims have united to defeat tyranny.” He demonstrates how Christians and Muslims have risked their lives to defend and protect one another in recent weeks. This under-reported dimension of the Egyptian revolution, it seems to me, suggests a fascinating moment may be upon us, a moment when both Islam and Christianity (and, one would hope, other religions as well) can experience a shared reformation: a reformation against religious fear, intolerance, hatred, and violence.

Osman warns, “Tyrants and war mongers always seek to divide the people … The elite are lying to divide and rule us.” But his warning makes way for the possibility of Christians and Muslims following a different spirit (or Spirit) — not of war-mongering but of peace-making, not of tyranny but of liberation, not of division but of reconciliation.

What would happen if we became organized, not only for big public demonstrations (which are spreading from Egypt to Jordan to Yemen — with resonance as far away as Kentucky), but also for sustained daily resistance to ecological destruction, war, oppression of minorities, and carelessness towards the poor?

The Protestant Reformation was messy, and along with much good, there were plenty of ugly problems. The same will be true of what is emerging globally now. What some see as a breakthrough and blessing, others will see as a catastrophe and apostasy. What will happen will depend not just on “them, ” but on all of us.

So today I’m reflecting on the possibility that this hopeful dimension of the Egyptian revolution can spread, not just through the Arab world and the Muslim world (remembering that the two aren’t the same thing — there are many Arab Christians and many non-Arab Muslims), but through the whole world. Whether we call this a spiritual revolution or reformation, whether we call it a manifestation of tikkun olam, shalom, salaam, ijtihad, or the kingdom of God, this moment becomes a spiritual and moral summons that we must all consider and either join, oppose, or absent ourselves from. In that, we are no longer observers sitting on our couches watching history unfold on TV or online: we are all potential activists, invited to take a revolution of hope onto the streets and into all dimensions of our lives, making history for our children and grandchildren.

—-
Brian McLaren is an author and speaker whose new book is A New Kind of Christianity: Ten Questions That Are Transforming the Faith