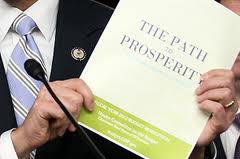 I’ve been fasting for 18 days in solidarity with the hunger fast for a moral budget because something incredible is happening in our country, and we haven’t seen anything like it in 30 years. When introduced on February 11, H.R. 1, the FY2011 spending bill approved by the House, proposed $100 billion in cuts to this year’s budget. Two-thirds of H.R.1’s cuts will directly affect working and poor people.

Then, on April 5, Rep. Paul Ryan (R-WI) introduced a 2012 budget that is much, much, much worse than H.R.1. Ryan’s budget would put all the burden for balancing the budget on poor people, while at the same time cutting the tax rate for people in the top income bracket from 35 percent to 25 percent.

Some historical context on federal individual income tax rates can help us understand the gravity of this proposed budget plan:

Americans (Republicans and Democrats) used to take pride in paying their taxes. Our contributions made this nation great. We lived on less and paid our fair share to make sure all of our most basic needs were met. That changed in the 1980s with the onset of Reagan’s “trickle-down” economics. Reagan slashed the budget more than any president before him and drastically lowered the top marginal tax rate. And we found the trickle didn’t go far. Most Americans never felt one drop.

Now, in the middle of a time of war; in the middle of the greatest economic crisis since the Great Depression; in the face of history which teaches us that balanced budgets require extra revenue from top marginal tax payers (not just cuts to services for the poor) — in this context — Rep. Paul Ryan has proposed the lowest top marginal tax rate since the onset of the Great Depression and the death of services to the poor, domestically and abroad.

Did you know the top 400 richest Americans have more wealth than the bottom 50 percent combined?

Did you know CEO pay has increased by 20 percent to a median pay of $9.6 million for top executives at 200 major companies since 2009, while worker pay has remained virtually unchanged (decreased by 0.1 percent) in the same period?

The Ryan plan is not fiscal responsibility; it is a declaration of war on the poor. The GOP is currently being led by blind ideology that has potential to literally kill people — real people made in the image of God.

And last week NY Faith & Justice board members Veronica Black (Rainbow Push), Gary Wiley (Trinity Grace Church), Peter Heltzel (Micah Institute), Derrick Boykin (Bread for the World), and Tim Bomgardner (World Vision) joined the hunger fast as well! Together, we are fasting with more than 40, 000 Americans who are hungry for a moral budget.

As Palm Sunday approaches and Easter rounds the corner, let us remember Jesus’ last sermon before going to the cross: “Just as you did to one of the least of these who are members of my family, you did to me.” (Matthew 25: 40)

This blog post is shared via our partnership with Sojourners