I am writing this from Rome, the epicentre of the empire that was. Today was spent walking around Vatican City, the religious epicentre of the empire that was. Aside from the grand spectacle of the place, the magnificent architecture, the stunning frescoes there was something missing that decidedly caught my attention. It wasn’t Benedict. It was the penises. Yes, you did just read that correctly. It was the absence of the penises…on the statues that is.

It became apparent to me today that many of the statues within Vatican City museum have had their penises lopped off and replaced with a fig leaf. I do not claim to be an art historian of any variety, my interest lies more in the social implications of such an act. Historically, as far as I was able to tell through some quick research, the penis’s were removed by order of various popes in the middle ages. It is a sad desecration of these beautiful pieces of art that, in itself, symbolises a sad religious emasculation of all things sexual. Perhaps it was simply seen as improper in their time. Perhaps it was a fearful running away from anything to do with sexuality. A separation of sexuality from anything to do with spirituality. A separation of the person who is good from the body that is not.

I have heard it said that the church offers guilt without sex and that society offers sex without guilt.

Indeed, it seems we always swing our pendulums too far. It doesn’t take a genius to see this in the estimated 10-14 billion dollar a year pornography industry that takes real people and makes them plastic. Takes sexuality and cheapens it. Turns it into smut. It is an industry built around the separation of personhood from form, of the spirit of a person from the beauty of their body. It educates the masses toward a harsh objectification and dehumanisation that is then taken into ones own romantic relationships as sexuality is reduced to a cheap, selfish, physical act. In other words, it is an industry that perpetuates a separation of the body from the holistic nature of the real-life person that accompanies it. As humans we are far less compartmentalised than we like to admit.

We see this reality just as evident in the 428 billion dollar a year advertising industry. Where we are no longer sold a car, or deodorant, or a beverage based on their function. Instead advertisers, in their bid to stand out from all the others, tap into those deepest human needs of love, belonging, purpose, self-worth and subsequently exploit the anxiety that surrounds these to get the customer to buy the products. They tell viewers that they deserve the best whilst at the same time telling them they are too fat, too ugly, don’t have the right hair, the best gadgets, the coolest clothes. The media machine is oiled on the fears of the masses. The fear of the Father that he is not providing what a good father should for his family. The fear of the teen that they will be left out and considered uncool. The fear of the mother that they are missing out on a life of adventure and romance. The fake reality of the bodies and the lifestyles of rock stars and movie stars and models and Disney Princesses and TV personalities all become the carrot dangling just in front of our grasp. That which makes us real is commodified into a sales pitch. The empty promises of a shallow system that will do anything for profit. We become objects to be had and thrown away. A price-tag placed upon sexuality. The separation of the true person from a commodified body. Sex sells.

It seems that on both sides of the pendulum, the religious and the secular, there is a separating. A splitting apart of the body and the person. Of sexuality and spirituality. Of the inside from the outside. Of who we are from what we do with our bits. 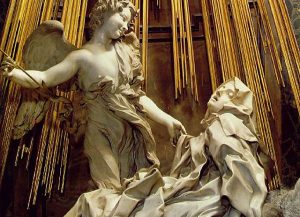 There is another classic statue that my wife and I saw in a different church in Rome that the censor board didn’t quite get to. It was carved by the famous Catholic Italian sculptor, Gian Lorenzo Bernini, who did much of the artwork and design within Vatican City. The statue is called the ‘Ecstasy of St. Teresa’ and depicts Saint Teresa of Avila, a Spanish mystic Nun from the 1500’s, having a spiritual encounter that can only be seen as sexual. The statue derived from her own highly sexualised and provocative description of the experience in Chapter XXIX of ‘The Life of St. Teresa of Jesus’. Within it there is no separation of the body from the person, of sexuality from spirituality. There is instead a beautiful union and explosion of the two. Teresa in her writing and in the statue looks to be in the throes of orgasm as the sculptor blurs the lines between spiritual encounter and sexual encounter. It is a glorious religious and spiritual affirmation of sexuality, not a running away from it.

Also by Joel: For the Christian part of me…I am sorry

Perhaps this statue provides us with a way forward that doesn’t lend toward more pendulum swinging and separating and compartmentalising. It calls for a radical holding together of the inside and the outside. A recognition that we should not separate who we are from our bodies, our spirituality from our sexuality. The way forward is to bring them together. A richer integration. A re-education of the sensual body as a beautiful and sacred thing. To bring to the table, or to the bed as the case may be, ones whole self and so to honor the whole self of your partner. To know and be fully known.

I view these two powers, my sexuality and my spirituality, as dancers. Initially both were wall flowers afraid to dance. My spirituality was immobilized by proscriptions and fixed answers. My sexuality was hiding in a closet, ashamed of itself. The other felt crowded and claustrophobic and backed away. Finally they found times when the dance led them, and for brief moments they became perfect dancers, full of grace, true to each other. They danced together as my soul.”
~ Chris Glaser- Coming Out to God ~

—
is an author, speaker, performance poet and educator from Melbourne Australia. He has, for the last five years, been on faculty at Tabor College Victoria is the founder of ‘The Centre for Poetics and Justice’. Joel is a regular host on ‘indiefeed performance poetry podcast’ (the most well known spoken word podcast in the world) and in 2012 was the third ever Australian to represent his nation at the Individual World Poetry Slam Championships. He is the author of  and is passionate about discovering a new way to live outside the system of the Empire of Greed and spends much of his time trying to match his actions with this belief.

We need your support to sustain our multi-media message, build our platform, and establish connections around the world in an effort to see the Kingdom of God come here on earth as it is in heaven. Please consider donating today: