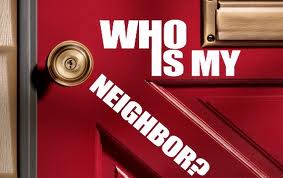 When Jesus was asked “Who is my neighbor?” what was the man really asking?

Certainly he was expecting a simple, direct answer – one that he could take home and live with. He was surely expecting a response that would reassure him that he could continue associating exclusively with people like himself; certainly God would prefer that he would only, or at least primarily, spend time with people of his religion, his education, his social class.

Jesus rarely, if ever, gave simple formulaic answers – and he certainly didn’t here.

The story of the Good Samaritan is familiar to most of us – perhaps too familiar – but to its original hearers it was uncomfortable if not incriminating.

The question itself, is simple and direct enough. Most of us ask qualifying questions of God like this all the time.  We want to know who, or what, or how or why in almost any given situation: and we expect a simple answer.

We expect God, or a pastor, or a spiritual advisor to tell us what to do.

Jesus doesn’t do that.

In fact Jesus’ answer is complicated and unsettling. And none of his hearers like it.

A man, an “expert in the law”, God’s law, seeking to “justify himself” asks Jesus the deceptively simple question “Who is my neighbor?”

Instead of giving an answer anything like the man expected, or wanted, Jesus tells a meandering and ultimately unwelcome story:

A man is traveling through a dangerous and isolated area by himself. He is robbed, beaten and left for dead.

The political conservatives among us might say that he shouldn’t have been there – especially by himself, so he deserved what happened to him. He should have been more prudent.

A priest walked by, also by himself, after all, who would rob a priest?

A Levite, an heir to the maintenance of the temple, also saw the man in distress, and, like the priest, crossed the street.

Most of us can easily imagine the internal conversation going on in the minds of these two men: “I’m too busy.” I don’t want to get dirty.”  I don’t have the right clothes on.” “He looks like one of those people, they’re always in trouble like that.” “Just another person expecting an “entitlement”, really someone should do something about those people.”

Both of these “religious” people are too busy to stop – and that just might be what God is calling us to do – just stop – interrupt our routine, do something we’d rather not, leave something important to help someone else – someone we’d rather not help.

We are all offered the starring role in the contemporary version of this story.

But in the Luke account it is a Samaritan. John 4:9 reminds us that Jews did not associate with Samaritans – for good reason; they were idolatrous half-breeds. They had abandoned the God of Israel and intermarried with the surrounding pagan people.

No “good Jew” associated with a Samaritan – but Jesus did. In fact a case could be made that the first Christian evangelist and missionary was the Samaritan woman (John 4) – a double heresy.

This reviled Samaritan picked up the man, took him to the next village and paid an innkeeper to take care of him until the Samaritan could return and pay any other required expenses.

Can you imagine Jesus looking into the face of the expert in the law – or into your face in the mirror– and asking “Which of these three do you think was the neighbor?”

The answer, at least in retrospect, is easy. Even the “expert in the law”seeking to “justify himself” knew. He couldn’t bear to even say the dreaded word “Samaritan” but he knew the neighbor was “the one who showed mercy”. (Luke 10:37)

Most of us like this story Jesus told: as long as we don’t think about it.

What story would Jesus tell us if we had the opportunity to ask him the same question?

So, who is my neighbor?

Most of the time, maybe almost all the time, I really don’t want to know who my neighbor is.

That wind-blown, sunburned woman with the shopping cart, that family living in their car for months, that guy sleeping – or dead in the doorway. I really, really, really, don’t want to know.

I really am too busy.  I don’t have the right clothes. My phone battery is dead.

Any excuse will do.

In keeping with long-standing religious tradition, I’ll cross the road or keep driving.