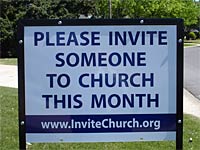 Those of us who are involved in church are well-trained to invite people to worship. We find ways to bring up in conversation how great our music is, how compelling the sermons are and how children are involved in our ministry. Part of this is driven by the desire to grow the church, but there’s also the very human tendency to want to share something that is exciting or meaningful to us.

But when we invite people to participate in worship as their first experience as part of the faith community, we have things all out of order.

Sure, some people will come through the doors because of an ad in the paper, the sign outside or word-of-mouth buzz, and we don’t want to turn them away, obviously. But for those who seem curious about what this whole church thing is about, worship as a first step may be overwhelming, alien or even alienating. We may never have another chance to introduce them to anything else we’re about.

Although we’ve generally looked at worship as a point of entry into our faith communities, it actually should be the final destination in a journey of discipleship. This is particularly the case regarding young adults, many of whom have had negative experiences with organized religion, or who have not had any contact with a church in years, if ever.

One thing my wife, Amy, and I noticed when starting a new church eight years ago in Pueblo, Colorado was that the younger adults were the last age group to buy into the community we were building. We came in under the mistaken impression that we would naturally attract people more like us: young, educated middle class families.

The ones who came, and stayed, at first were largely over 65 years old, though. We were shocked. After all, what did we have to offer this age group? When we asked them, most had a long history with church, but they were simply tired of their previous congregation’s direction or style. So they had an inherent trust in the system of organized religion; they just wanted something new.

For young adults, the idea of participating in worship was a major commitment. After all, they either didn’t know any of the songs and rituals, or they represented a host of negative feelings from their past. To start there for them would be a setup for failure.

So we had coffee – a lot of coffee. We invited people over for dinner, or took them out for a beer. We chatted with younger folks through Facebook, added them to email list apprising them of upcoming social and service-oriented events we were planning. Basically, we just made ourselves available to them as friends first, allowing a more three-dimensional relationship to develop first, so that they could come to trust that we weren’t the same breed as the religious folks they had known in the past or from the media.

Over time some approach us with questions about theology and scripture. This inevitably leads to talks about how our faith and social values are put into action. Though we may vary in our passions and personal values, we can almost all agree on two things:

➢ The world is filled with brokenness, and;
➢ We’re called to help heal the brokenness.

The notion of evangelism has gotten a bad rap in the last few decades, hearkening images of the preacher with a bullhorn on the corner or the pearly-white-toothed pastor in a polyester suit, knocking on your door at some ridiculous hour on Saturday to “tell you about Jesus.” If that’s what evangelism means, most people want no part of it.

But everyone has a story to tell, and everyone wants to be heard. Too often, the ulterior motive of getting butts in the pews and bucks in the plate is evident when we invite people to worship. After all, what kind of real relationship with you can they expect in such a setting? But if you invest in people, one at a time, face to face and story to story, a sort of social capital builds between you.

And then, once you actually know each other, you do what any real friends would do – you invite them to share in the things that are meaningful to you in your life. Suddenly asking someone to come to church with you makes a lot more sense.

Back when institutions were inherently trustworthy, and back when churches were the social epicenters of a community, Sunday worship was more or less a given. Now, it may not enter into the discipleship equation for a long time, if ever. But which is more important: building up our church numbers or sharing in a real, vulnerable and personal way what we believe it means to be Jesus for others?

One doesn’t necessarily exclude the other, but the latter is far more important, nourishing and life-changing than the former. Skeptical? Just compare the number of times in scripture that Jesus broke bread and shared story in the streets and homes where people lived, versus how many times he invited people to church.

Now, go and do likewise.