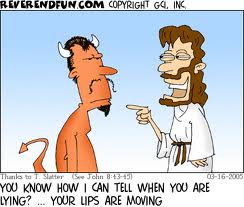 “If we’re going to effectively persuade him of his impotency at impacting a world in need, be sure to obscure the fact that the choices he’s making now already are making a difference in the world.  He can’t be allowed to catch on that the choices he’s already making about how he uses his time, money and influence already do impact the lives of the ones our Enemy dotes over.  Should he begin to suspect it, just remind him that he’s not half as bad as the guy two pews behind him at church who owns a boat.  And a lake home.  And a lake.  This time-tested strategy has proven most effective at thwarting authentic conviction and any misguided impulse toward change.

“Don’t sweat it if he reads a few articles or books on how he can make changes in his life to advance the Enemy’s kingdom. Once he reads two-hundred suggestions for very small choices he could make that would impact the lives of others, he’ll feel completely overwhelmed because—obviously—there’s no possible way he can implement them all. Persuade him that if he can’t raise chickens, and grow his own fruit and vegetables, travel four times a year to Haiti, become fluent in Creole, dramatically reduce the amount of household waste he produces, and start hanging every item of clean laundry on a clothesline in the backyard he can’t possibly make a difference in the world.  Just help him see that if he can’t do everything, he probably shouldn’t even bother doing anything.

“Remember: the problems are very big and he is very small.  Small and impotent is key.  Remind him that only very influential people can do much at all to establish the Enemy’s encroaching kingdom.  Certainly not him or his friends or his church.

“Little Devil, you do see how easy this is going to be, don’t you?”

If you were born without a sarcasm detector, God bless you, I’ll make it plain: you can impact a world in need.  Not only can you do it, you were made to do it.  Whether you’re younger or older, single or married, working inside or outside of the home, you already have everything it takes to make change in the world God loves.

I wanted to nail that down at the get go, as this whole possibility has been pretty much obscured in the culture in which we live.  The line we’re fed, more often, insists just the opposite.  Unless there’s just been a well-televised catastrophic natural disaster, no one’s really encouraging us to think of anyone other than ourselves.  In fact, marketers have placed their bets on the probability that, instead of looking out for the good of others, we’ll spend our time, money and energy on ourselves and our own.  To the credit of their worldly wisdom, it’s worked out pretty well for them so far.

Specifically, the message that bombards us daily in the media is that we can satisfy our every desire.  See how that’s sort of a diametrically different proposition from meeting the needs of others?  For many of us with disposable income, this titillating proposition that we can satisfy our every craving is not entirely untrue. Not only can we do it, we’re told, but we really sort of deserve to.  Whether it’s a cheesy ham and egg breakfast sandwich, the latest flashy electronic device, or the most spacious home we can afford, we’ve become convinced that we need not hunger for anything.

And though our culture has groomed us to believe that it is our basic American right to live lives that are centered on ourselves, there is actually a completely other game plan for those of us who call ourselves followers of Jesus.  If you’re a Christian, this shouldn’t be coming as a surprise to you.  Should, perchance, it be new material, this is not the book you need to be reading.  Slowly step away from these pages and find the nearest Bible.  Read any one of the four gospels.  When you’re done, this Red Letter Christian movement will make so much more sense.