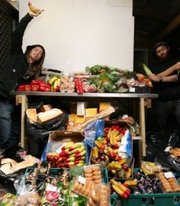 [Editor’s Note: This article is provided by Jarrod McKenna but in fact was written by Malcolm Quekett of the Western Australia]

It is just past 9pm and Geoff Bice emerges from a skip bin at the back of a shopping centre.

He triumphantly holds something up to the torch light. An egg carton. He opens the carton. One egg looks only slightly damaged. The other 11 appear intact.

He puts the carton into a tray, climbs back into the bin and disappears.

Welcome to the world of the dumpster divers.

Over about an hour Mr. Bice, Jarrod McKenna and the third member of the group, Amy, visit five sites.

At one site honeydew melons sit on a wooden pallet next to the bin. The trio leave them untouched though it seems almost certain the fruit is to be dumped.

The fifth bin looks full of promise with fruit in glad wrap enticingly near the top.

But as store employees emerge and see them, the trio decide to leave the fruit and move on.

The trio are not down and out. They do not live on the streets but they are appalled at the level of waste our society tolerates and believe they should do something about it.

Members of a Christian community in the eastern suburbs, they will either eat what they have retrieved or give it to others, telling recipients it is from a dumpster.

If in the end they decide some of the food is not suitable to be eaten, they will give it to their worm farm, chickens or put it into the compost.

Mr McKenna, 30, is World Vision Australia’s national advisor for youth, faith and activism. What drives him is simple.

“We waste, on an island of affluence amid a global sea of poverty, where about 900 million people go to bed hungry each night, ” he says.

“Gandhi would say the world is created in such a way that there is enough for everybody’s need but not everybody’s greed.”

He says the practice of trying to ensure there is enough for everyone is as old as the Bible, which contains passages relating to the need to leave some of what is harvested for refugees, orphans and widows.

Dumpster diving also ties in with other issues such as supporting local farmers and reducing the greenhouse effect.

“We have excess that we throw out and in a world where people are starving, that seems unfathomable, ” she says.

Mr Bice, 30, who has gone back to study, says retailers sometimes throw out food because the packaging is damaged.

“One time there were bags and bags of potatoes, ” Mr Bice said. “The potatoes were perfectly fine.”

The three have a number of rules by which they operate.

Unprocessed meat is out and Mr McKenna says he would not break a lock on a bin.

“I have an ethical problem with property damage, ” he says.

Amy says it is also important to leave the bin area tidy.

Mr McKenna says he has been stopped by police three times in six years of dumpster diving and asked to move on but has never been charged with an offence.

“They were kind, asked if we were in a bad situation and needed a homeless shelter, ” he says.

Some of the food the trio retrieve as they show _The West Australian _ how they dumpster-dive is past its “best before” or “use-by” dates. Some is not.

Some of the food would not appeal to the average shopper, some looks like food bought every day.

After examining and washing their haul, the trio reject a packet of breaded jalapeno peppers, which has a use-by date of May 4. A carton of custard with a use-by date of April 14 will also be rejected.

The trio say the volume recovered is down on past runs. On one occasion they catered a friend’s wedding with food gathered on the groom’s buck’s night, Mr McKenna says.

But what they have is welcome. Amy is looking forward to antipasto of olives, cheese and cherry tomatoes.

“We will have tomato omelettes for a while, ” Mr McKenna says.