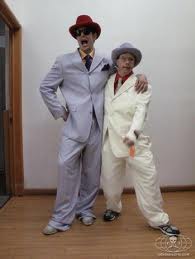 “Can someone say the word out loud, so that we all know what we’re talking about?” I asked.

A hand slowly went up.  Then another.

“Retard?” one ventured hesitantly, as if unsure whether she even wanted to be right.

“Yes, ” I confirmed, “that’s the R-word we’re talking about.”  I couldn’t bring myself to repeat it out loud.

That this conversation, at a regular Tuesday night gathering of teen friends with disabilities, had been inspired by Johnny Knoxville, known neither for political correctness nor good judgment, made it all the more absurd.  In an interview with his The Ringer costar, Eddie Barnabel, who has Down’s Syndrome, Knoxville explains how his language—the R-word in particular—has changed since knowing Eddie.

In all sorts of situations, children, teens and adults drop the “R-word” to lazily describe anything or anyone who’s clumsy, awkward or stupid.  I recently heard of a high school teacher who uses it to describe her class when they’re not performing well.  (Great post, here, about the word’s common usage.)

When I asked my teen friends what people mean when they use this word, they shared…

“They make you feel down.”

And from one suave player, “They think you can’t get the girls.”

In a word, the “R-word” declares that a person is worth less.

In Jesus’ day the “R-word” used to denigrate others was raca.  The term of the reproach, which is translated from Aramaic as fool or empty-head meant worthless.

So, it sort of seems like this was something that lit Jesus’ fire.

Identifying an individual who’s been created in the image of Jesus’ Father as anything less than worthy and beloved, is to disagree with God’s definitive announcement that God’s creation is good.  And it seemed like it was pretty important to Jesus.

Today, it’s not just the R-word, of course.

If we’re honest, there’s an entire alphabet of words we drop—publicly and privately—which lie about the inherent value of the individuals God loves.  The R-word and the N-word are the most obvious examples.  The other F-word (fag) and a P-word (pervert) or a W-word (whore) could be added to the alphabet picture storybook that needs to be burned.  In the fires of hell.

Jesus’ witness was clear: the language we use to describe others is not about political correctness.  It’s about telling the truth about those created in God’s image.  If your imagination is short on truthee words, they include, but are not limited to…

According to Jesus’ red letters, our words matter.

—-
Margot Starbuck is a communicator who writes and speaks about kingdom living, God’s heart for the poor, body image, edgy love & other fresh ideas.  She’s convinced that because God is with us and for us in Jesus Christ, Christians are set free to live love that is for others, especially those who live on the world’s margins. This is kind of Margot’s big thing.  Margot lives in the Walltown neighborhood of Durham, NC, with her husband, Peter, and their three kids by birth and adoption.  At Reality Ministries, she shares life among friends with and without disabilities.  A graduate of Westmont College and Princeton Seminary, Margot is ordained in the Presbyterian Church USA.