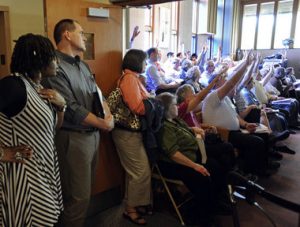 This spring, I have been studying, really studying the U.S. Constitution, a document that I cannot help but see as fundamentally inspired.

My guide for this is Richard Beeman’s excellent new annotated version, published last year by Penguin Press. I was given a copy courtesy of the Constitution Center in Philadelphia, where I had the honor in March of joining 41 other reporters from the U.S. and around the world as this year’s class of Peter Jennings Fellows.

The Peter Jennings Project, named for the legendary news broadcaster at ABC News, honors Jennings’ love for his adopted country. He attributed much of the enduring, elastic freedom of the United States to the power of the U.S. Constitution.

What has stayed with me, as I decompress from the intense weekend, filled with sessions with federal judges, top historians and a U.S. senator or two, is the long narrative arc of the Constitution.

One of the things you can’t help but notice, if you read the original Constitution from beginning to end, is the way it dances around the slavery issue, that wart on the nose of American idealism. Slaves aren’t named, but that’s who it means when, in the second section of the first article, it explains how to calculate how many representatives a state gets: “adding to the whole Number of free Persons, including those bound to Service for a Term of Years (apprentices), and excluding Indians not taxed, three-fifths of all other Persons.”

All other persons. The semi-people, the three-fifths people, meant, of course, the slaves, the thousands and thousands of people that land-holding white people used to expend resources, energy and angst in preventing from reaching their God-given expressions of talent and intelligence, vocation and calling.

Oh my God, forgive us.

It’s so easy for us now, surrounded as we are, by such a host of gifted African Americans: Oprah, Denzel, Neil deGrasse Tyson, Cam Newton and Mark Ingram, to see how perverted, cruel, short-sighted and un-Christian those days were. How could they do that?

Surely, we think, we would have spoken out against that.

We congratulate ourselves on how accepting we are now, but we ignore the fact that our Big House still keeps a shed out back for homo sapiens defined in fractional terms: undocumented aliens, who never know when they’ll be exploited or attacked, and also gay people who, some say, really should just re-program themselves to get the hots for the right kind of people.

Oh my God, forgive us.

My own denomination, the Presbyterian Church (USA) has, just this week, ratified a change to our constitution that will remove the language, inserted in 1996, that excludes the ordination of gay or lesbian ministers. It goes into effect July 10. On May 5, I was privileged to be one of 180 voting elders and ministers who narrowly decided our part in that for the churches of Middle Tennessee, approving the change with a vote of 93 to 86, with one abstention.

I couldn’t help thinking, during our prayer-filled, song-filled, thought-filled meeting, of the work to put together any document, any governing constitution, to help people work together across differences of all kinds. How much difference can there be before a group is no longer a group? Has our hyper-specialized and internetted world produced impossible demands for distilled orthodoxy?

What will happen to my beloved denomination? There are congregations in North Alabama, which also approved the amendment this spring, positioned to send representatives to a meeting in August of congregations considering leaving the PC (USA). Central Presbyterian here in Huntsville pulled out a few years ago and joined the Evangelical Presbyterian Church.

People on both sides are wishing this weren’t being made a priority – Bible verses, all disputed in interpretation, addressing homosexuality? Seven. Undisputed verses about helping others and loving God? Thousands. And no congregation is forced to call a minister they can’t respect.

—-
Kay Campbell is Faith & Values editor and reporter at The Huntsville (Alabama) Times and an ordained elder in the Presbyterian Church (USA) because, obviously, they’ll take anyone. You can reach her via email at: [email protected]