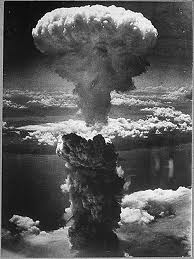 It must be one of the extraordinary accidents of history that the first atomic bomb was dropped on August 6, which marks the annual Feast of the Transfiguration for Roman Catholic, Anglican, and Orthodox Christians around the world. As Matthew’s Gospel describes the Transfiguration:

After six days Jesus took with him Peter, James and John the brother of James, and led them up a high mountain by themselves. There he was transfigured before them. His face shone like the sun, and his clothes became as white as the light. Just then there appeared before them Moses and Elijah, talking with Jesus. Peter said to Jesus, “Lord, it is good for us to be here. If you wish, I will put up three shelters–one for you, one for Moses and one for Elijah.” While he was still speaking, a bright cloud enveloped them, and a voice from the cloud said, “This is my Son, whom I love; with him I am well pleased. Listen to him!” When the disciples heard this, they fell facedown to the ground, terrified. But Jesus came and touched them. “Get up, ” he said. “Don’t be afraid.” When they looked up, they saw no one except Jesus. (Matthew 17:1-8)

Roughly 19 centuries later, and 65 years ago today, the city of Hiroshima was destroyed with elements that cannot but recall the Transfiguration: a sun-bright white light, a roar from heaven, a cloud, terror, and — most of all — a world that would never be the same.

Mass destruction was not new to the human race, of course: cities had been leveled before World War II, and civilians had died en masse before, though never to the level of the Holocaust. But before August 6, 1945, mass destruction was achieved through the amalgamated repetition of micro destruction: one sword swung, one bullet fired, one gas chamber filled, one firebomb dropped, over and over and over again.

At Hiroshima, mass destruction was consolidated into a single plane and a single bomb. Moreover, it foretold the apotheosis of humanity’s bent toward hell: our proliferated world, in which the spread of nuclear weapons and ballistic missile technology has placed life on earth under a single act of human will. Hiroshima didn’t transfigure the world, but it did transform it.

About a week prior to the Transfiguration, Jesus had asked his disciples, “What good will it be if a man gains the world but loses his own soul?” (Matthew 16:26). The power of our atomic age means that we have gained the world in a most literal sense. But at what cost — and what are we to do about it?

It is no surprise that these beliefs and this work lead to a routine dismissal as naïve, utopian, and idealistic. And yet it seems to me that my accusers are twice the sons and daughters of utopia that I am. They believe, against the evidence of recorded history, that with nuclear weapons we will somehow enjoy perpetual luck. And they believe, against the Scriptures, that righteousness is weak.

In the Transfiguration, I see God’s pre-emptive answer to such adversaries — the would-be nuclear world-gainers. “This is my Son, whom I love. With him I am well pleased, ” says the Lord. “Listen to him!”

To wit: the way of Jesus of Nazareth is greater even than the original act of spiritual mass destruction, the Fall: “Sin entered the world through one man, and death through sin, and in this way death came to all men, because all sinned” says Paul, but “if the many died by the trespass of the one man, how much more did God’s grace and the gift that came by the grace of the one man, Jesus Christ, overflow to the many!” (Romans 5:12, 15).

On August 6 we remember a transfiguration and a transformation. Both came with clouds, blazing light, and sound. One brought death in a scope never before seen. But the other revealed a life even greater.