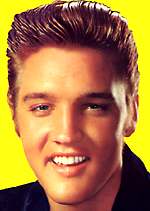 I wish I had a nickle for every time God spoke to me through Elvis. Like Elvis’ song “A Little Less Conversation”:

All this aggravation ain’t satisfactionin’ me;

A little more bite and a little less bark;

A little less fight and a little more spark;

Close your mouth and open up your heart, and satisfy me.

Mohandas Gandhi read the Gospels, particularly the Sermon on the Mount, and was forever changed. Jesus is the Way to follow! But you know the rest of the story: Gandhi looked up and saw the British Empire with swords drawn oppressing and exploiting the people and the land of his beloved India, all in the name of Christianity.

Gandhi declared that he, therefore, could not be a Christian.

Novelist Anne Rice not long ago became a Christian; she turned her attention to writing fiction about Jesus’ childhood. Everybody was so excited that the novelist known for her incredibly dark vampire stories had become a Christian … Until about a year ago when she publicly stated that she quit being a Christian, because she’d rather follow Christ.

One cannot help but wonder if Jesus, like Gandhi and Anne Rice, would look around at popular Christianity today and say, “if this is Christianity, then…”

One has to ask of Americanized Christianity, “What Would Jesus Do?”

Imagine Jesus sitting in the wings at one of our big stadium-filled “I’m-a-Christian” prayer celebrations, when a superstar walks up to the microphone and reads from Matthew’s Gospel, chapter 25:

Then the king will say to those on his right hand, “Come you that are blessed by my Father, inherit this great kingdom prepared for you by your founding fathers,

for I was a Christian politician, and you voted for me;

for I was a Christian businessman, and you spent your money at my store to support ‘Kingdom Values’;

I was a cute slogan bumper sticker and you proudly put me on your car;

I was a bill protecting ‘Christian values, ‘ and you helped to get me enacted into law…

A Christian athlete recently shared his testimony with a group of Christian students. The athlete spoke of hard decisions he has had to make as a Christian. He spoke sincerely of tough decisions which tested his commitment to his Christian faith.

The athlete talked about his friend who, after some struggling, decided she was not a heterosexual. The athlete wondered what he should do; he remembered the story of Jonah – how when Jonah was running from God and was on the ship, the crew of the ship threw Jonah overboard. Thus, the athlete shared that it was his Christian duty to “throw” his friend “overboard” … meaning he couldn’t be her friend anymore based on her sexuality.

The Christian culture we live in teaches us how to talk a lot about Jesus, yet it has hardly anything to do with helping us learn how to love like Jesus. Would Jesus throw someone overboard? Of course not! Our churches, though, teach us how to throw all kinds of people overboard everyday.

It doesn’t take long to conclude that if Jesus stood here today, He might well say “If this is Christianity, then I am NOT a Christian.”

When it comes to a Christ-like message, very much in keeping with the Sheep and the Goats, few things can match the simple message of Elvis’ hit, “A Little Less Conversation.”

Want to serve Jesus? Talk less; love more. Close your mouths and open up your hearts.

The Words of our Lord (paraphrased by Elvis). Thanks be to God.