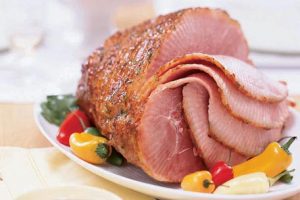 How did we go from the Passover Lamb to the Easter Ham?

It’s a complicated, not very pretty story, central to modern religious identity and, for those reasons, tucked away from public view.

A truly “new” religion is quite rare in human history. Virtually all religions are derived from a previous one. And virtually every religion has culturally defining boundaries that clarify who does – or does not – belong.

The New Testament is a continuing portrayal of the argument about just how “Jewish” this new faith should be. The term “Christian” was originally a derogatory term (Acts 11:26) and Peter and Paul (and James) fiercely debated how “new” and separate Christianity should be.

James as one of the “leaders” of the church in Jerusalem (Galatians 2:8-10) clearly comes down on the side of Christians being “new” Jews – not a separate religion; hence Paul’s conflict (and ultimate split) with him. The book of James doesn’t even mention Jesus – it could easily be an Old Testament book.

Peter emphasized in Acts (10:14) that he had never eaten any unclean thing. There is no reason (or evidence) to believe he did – or had any reason to change.

Later on, Christians used, and ate, things that made them distinct from their Jewish antecedents – in fact, throughout history Christians have chosen – and done – things that showed as much contempt as possible on Jewish tradition; ham for example.

1492 was more than the year Columbus sailed for the New World; it was also the year that Spain expelled the Jews (and Muslims). Jews, Christians and Muslims had lived in peace under Islamic rule in Spain for centuries (711-1492) but when the Islamic state fell, Jews and Muslims were both forced out of Spain. Unless they converted.

It was one of those cruel choices that haunt human history; the Jews and Muslims could either “convert” to Catholicism and keep their homes and property or keep their faith and lose everything. Many left. But some stayed and publicly “converted” but privately kept their original faith.

The final tests were public banquets – with ham on the menu. Those who refused to eat ham were arrested and deported – if they were lucky. If they survived, they lost their property.

Many historians call this an act of ethnic cleansing. Whatever you call it, it was certainly effective.

Ham currently permeates Spanish cuisine, but its roots are as a deliberate exclusion and repudiation of Jewish and Islamic tradition. The Spanish menu stands as a continuing testimony to anti-Semitism.

When I bring this up with Christian friends, they all say the same thing; we are not bound by Old Testament law.

I am always amazed at how Christians pick and choose which verses of the Bible they think apply to them. There are far more verses condemning the use of pigs and pig products than homosexuality or abortion combined, just to choose one example.

Much of the Old Testament law is not appropriate for modern life.  In fact a strict adherence veers quickly into absurdity as A.J. Jacobs pointed out in his book The Year of Living Biblically. And there is the parody (I think) website with a focus on how much God hates shrimp.

Perhaps I’m getting more conservative (not likely) but perhaps we might take a good look at the intent of the Old Testament system; do we really believe salvation rests (or is lost) based on what one ate or wore? Or which plants were too close together in a garden?

Is our love for ham really so great that we eagerly (and annually) demonstrate our scorn for and separation from our Jewish roots? And what about our lack of respect for our Jewish brothers and sisters?

Is our consumption (if not celebration) of ham a sign of our “freedom in Christ”? Or is it a deliberate act of rejection and rebellion against God’s word and historical identity? Somehow it seems to me that spiritual maturity and “freedom” should be expressed at least in the direction of respect and holiness.

I don’t know about anyone else, but I have a lot of respect for Christianity’s foundations. It just strikes me as odd – and certainly disrespectful – to deliberately dishonor our own traditions and commemorate instead a deliberate act of persecution and anti-Semitism.