Last week I spoke with Rev. Dr. Brenda Salter McNeil — author, speaker, thought leader and founder of Salter McNeil and Associates—about her personal journey into the field of racial, ethnic and gender reconciliation. Today she shares some of the practical nitty gritty steps that set the stage for reconciliation.

For people who do want to be reconcilers, what are the baby steps?

Four things. First, I would say, get informed beyond what you hear on the news. The news is no longer a place where we are being told information without bias. I think, at this point, our news has been co-opted by either side of arguments and they are no longer giving us information for the purpose of informing us and educating us. It is really giving us information to arm us with ammunition for whatever we already believe. That is unfortunate.

So, we have to find alternative news sources. We have got to become better at gaining information that is unbiased. So, when it comes to things like the Trayvon Martin trial, that is going to take effort. It is easier to turn on the 6 o’clock news and hope for the best, but for those of us who want to do reconciliation, we are going to literally have to gain more information for ourselves and take responsibility for that.

After that, what’s the next baby step?

The second thing that I would suggest is that we are going to have to learn another language. People in the United States are some of the few people in the world who only speak one language. I think it is because for a long time we were so self-sufficient as Americans that it did not matter what other people knew or whatever languages they spoke. We felt you have to learn English because we are the center of the universe and so clearly you ought to know what we know because we are the best people on the whole planet. Well, that is shifting.

So, I am learning to speak Spanish fluently. I spent a month in Costa Rica this past summer because I truly believe that anybody who wants to do reconciliation needs to demonstrate that we have cross cultural competency and it begins with learning another language and being ignorant and having to be helped and taught and instructed. We have PhDs, many of us, and we are really bright. In Costa Rica I felt like I was in third grade on a good day. Just by learning another language, it makes us humble. It makes us teachable. It requires interaction with people who are unlike us. It makes us learn something about other people that we do not know and it gives us empathy for how it feels to be in another country or other continent and not understand what is being said. It really gives you the experience of being a reconciler from the other side and not as the helper but as the helpee. The very act of learning another language makes you cross cultural because you need to find somebody that you can submit to and learn from and then if you are going to keep learning to speak that language, you have to find people who look like that to talk to them. I do not care what language you learn, Korean, Japanese, Chinese, Spanish, whatever, but learn another language that forces you to interact with people that you would not normally interact with.

And the third step for folks who want to engage in reconciliation?

I really do believe that we have to travel and put ourselves in situations where we are learning from others. Because, again, if we cannot trust the news then we have to learn to go places that we can see what is really happening. For instance, in Palestine. What really is happening?  What is really happening in these places that we hear about, but I really do not know. You do not know how to vote for things. You do not know what to do because you do not know who is telling the truth. So, the way that I have learned to do this is that I experience other places and I learn.

For me, I learn by going into places where I experience another culture and I see how race is handled there. I learn from them. I would like to get to Australia. I have never been there. I told you I was in Costa Rica this summer. I have been to Africa. I learned a lot just by seeing it for myself. I would encourage young college students to study abroad. The more you get to see how other countries live and what happens to people who are on the bottom of society, you know things now that you never knew before because you saw it with your own two eyes.

I would say advocate. This is what I mean. I will use myself as an example. So, I started to educate myself because I realized there are things that I do not understand about immigration. People are asking me if immigration is a major issue around reconciliation. I kinda go, “I think so.”  But, I do not know enough about immigration to really say. Now, I go to Costa Rica because I have been trying to learn Spanish for 10 years at least. So, people have said to me if you really want to learn Spanish, you have to immerse yourself in that culture and language. You need to go a country and go to a language school there and really go for it. I feel like an immigrant. I am in another country where I cannot even count money. I do not know how to go into the bank by myself. You feel you are so smart in the United States, but here I do not even know how to buy groceries. I started to feel what it feels like to be a person in another country documented or undocumented where you really feel like you are scared all the time. You cannot pick up the cultural cues. You do not know how to take care of yourself or negotiate the system. You need people to help you. You have little children who understand more than you do. It is a very disturbing feeling.

I was exhausted by the end of most days because it took so much energy just to communicate. I am one of the most outgoing people you will ever meet and there were a few people in Costa Rica who thought I was actually shy. I am not shy, but not knowing the language and not knowing how to navigate a system, your personality even appears different than you would in your own country. I developed empathy for people who are in another country in a way that I could not have understood had I not felt it myself. 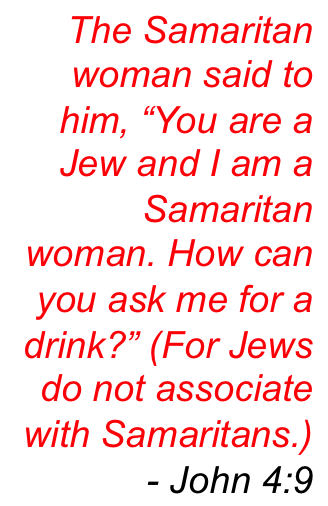 I now know what it feels like when you have no ability to feel like you can flourish because so much of the system around you does not allow you to do so. I got a standing ovation, but I was able to advocate from a place of real sincere empathy because for the first time in my life I knew what it felt like for myself and now I could stand up. Now, I know this, I do not believe that you can say that you want to be reconciled with people and not care about the policies that impact those people. That’s why I support immigration reform.

I wanted to ask you where in Jesus’ teaching and living do you hear wisdom for issues of reconciliation today?

For me, it is the woman at the well because it deals with so many divides. So, that is why I have written a entire book on John chapter 4!  It’s called “A Credible Witness: Reflections on Power, Evangelism and Race.” John 4 deals with the issue of ethnicity. It’s about Samaritans and Jews. It deals with the issue of gender. Here is a woman who has come to a well all by herself. She is divorced five times and women could not divorce men. There are gender dynamics. There are cultural and ethnic dynamics. There are socioeconomic dynamics.  He is male and she is female. He is a rabbi. She is a woman of ill-repute. There are religious differences. For example, she notes, “You say we should worship in Jerusalem and we say we should worship on this mountain.”  There are definitely differences between Jesus and this woman and there are so many reasons why that conversation should not have taken place.

The text begins by saying, “Jesus had to go through Samaria.” However, sociologically, geographically, theologically, ethnically, culturally or religiously Jesus did not have to go through Samaria. No Jew did; but I think that what this scripture models for all of us who want to be reconcilers is that Jesus did what other people don’t do. That’s what you’re called to do if you want to truly achieve reconciliation with others.